The British Rail Class 31 diesel locomotives, also known as the Brush Type 2 and originally as Class 30, were built by Brush Traction from 1957-62.

The Class 31 was one of the Pilot Scheme locomotives ordered by British Railways to replace steam traction. They were originally built with Mirrlees JVS12T 1,250 bhp (930 kW) and 1,365 bhp (1,018 kW) engines and Brush electrical equipment, but the engines were not successful and in 1964 a programme of works commenced to re-engine the fleet with the 1,470 bhp (1,100 kW) English Electric 12SVT engines. The locomotives were originally known as Class 30 under TOPS, with re-engined examples joining Class 31. The class was originally intended for service on the Eastern Region, but gradually became common in both the Western and London Midland regions too.

These first 20 locos, originally numbered D5500-D5519, were always easily recognisable as they did not have the headcode box mounted on the roof above the cab, leading to the nickname "Skinheads". They were also nicknamed "Toffee Apples" from the shape of the control key which had to be taken from cab to cab when changing ends. These pilot scheme locos were non-standard in having Electro-Magnetic Multiple-Working control equipment, and were limited to 80 mph (130 km/h). The Class 31/0s had a Route Availability of 5.After being involved in a serious collision D5518 was rebuilt as a standard loco with indicator boxes,blue star coupling code and 90 mph gearing. 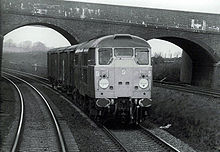 The first few locos externally had much in common with the original 31/0s as they lacked the roof mounted headcode box, and were also limited to 80 mph (130 km/h), but were otherwise the same as subsequent locos. The whole sub-class had steam heating boilers fitted, had the Blue Star Electro-Pneumatic multiple-working controls as found on many other BR classes, and were classified as Route Availability 5. The Class 31/1s could be found on a variety of secondary and relief passenger duties as well as parcels and freight traffic. While used in East Anglia, with locos allocated to Stratford and March depots, they were found throughout the Eastern Region of BR with Finsbury Park sporting a large allocation along with the depots at Tinsley, Immingham and Thornaby. Locos were also allocated to Bristol Bath Road and Old Oak Common on the Western Region, where they could be found working passenger trains as far west as Barnstaple and Paignton.[3] In the early 1980s Healey Mills and Bescot on the Midland Region also gained an allocation as replacements for Class 25s.

The Class 31/4s, numbered from 31400 to 31469, were conversions of 31/1s to which ETH was fitted. They had an ETH index of 66, equivalent to 330 kW, which was sufficient to power trains of up to eleven Mk 3 carriages, in order to allow them to power long trains, whose service run would be worked by a larger locomotive, between depot and terminus, although in actual passenger service loads rarely exceeded four or five carriages. 330 kW accounted for about a third of the total electrical power output, and the conversion was such that none of the ETH power was ever available for traction even if the ETH was not being used at all. The traction power output of the 31/4 was therefore limited to a maximum of two-thirds of that of the non-ETH variants, which did not help the performance of an already somewhat underpowered locomotive, and late running of 31/4-hauled services sometimes happened.

The final three EWS locomotives were withdrawn in 2001.

In 1998, FM Rail (then known as Fragonset Railways) purchased four redundant Class 31 locomotives from EWS. The first of these, no. 31452, was quickly repaired and repainted in a new black livery with a red mid-body band. It was quickly followed by nos. 31459 and 31468. Several more locomotives were also purchased, and in 1999, the first of two modified Class 31/6 locomotives re-entered traffic. The Class 31/6 subclass is essentially a modified Class 31/1 locomotive with through electric-train heating wiring. This enables a Class 31/4 and Class 31/6 to work in multiple and still heat the train, even if the no-heat Class 31/6 is attached to the carriages.

In 1999, Fragonset won a short-term contract with Silverlink for two locomotives to work in top-and-tail mode with two Mk. 1 carriages on the Bletchley-Bedford line. This was to cover for the non-availability of Class 117 and Class 121 diesel multiple units. The trial was a success, and in 2000 it was repeated in the summer timetable. The locomotives were retained until displaced by more modern Class 150/1 units cascaded from Central Trains.

By this time, the Fragonset Class 31 fleet had expanded considerably to include three Class 31/1, three Class 31/4 and two Class 31/6 locomotives. Regular work at this time included use hauling Class 317 electric multiple units from WAGN's Hornsey depot to Bedford for use with Thameslink. As units were still maintained at Hornsey, this meant regular workings between the two depots to swap units when maintenance was due.

After the demise of FM Rail, several of their Class 31s passed to Mainline Rail, operated by RMS Locotec. As of November 2008, four 31/4s and one 31/6 are owned by RMS Locotec, which is a subsidiary of British American Railway Services, Ltd.

A Class 31 is now owned by Nemesis Rail based at Burton on Trent like 31128 was an ex Fragonset which at present is on loan to North Yorkshire Moors railway as a standby in case of steam loco shortage.

Network Rail operates a fleet of three Class 31/1 locomotive, nos. 31105/233/285, and one Class 31/4 locomotive,31465 to haul test trains around the network. The locomotives were purchased from Fragonset, and overhauled at their Derby workshops. They have been repainted in Network Rail's new all-over yellow livery.

No. 31106 is privately owned by Howard Johnston, and after a period of lease to Fragonset and FM Rail is now managed by RVEL and in regular use with Network Rail. The same individual purchased three more of the class from EWS, but they acquired new owners - 31107 (scrapped at Rotherham in May 2009), 31289 (preserved at the Northampton & Lamport Railway), and 31301 (in store).

Over 30 locomotives have been purchased for use on heritage railways, however some of these have been subsequently scrapped, see listings below. Of note are the first built, no. 31018, and the last built, no. 31327.

In addition, the following locomotives were previously preserved, but have since been scrapped.

Number 31107, seen at RVE Derby, was the locomotive used in the Top Gear crash

On 21 August 2006, Network Rail and the BBC television programme Top Gear staged and filmed a crash between a Class 31 locomotive and a family car in order to promote rail safety. The off-limits event was the first of its type for 10 years and took place at Hibaldstow level crossing near Scawby in Lincolnshire, where the B1206 road crosses the Barnetby–Gainsborough railway line.

Two Class 31 locomotives and a parked Renault Espace were used during the crash. Network Rail's 31233 was used to propel 31107 up to a speed of 80 mph (130 km/h). The rear locomotive slowed down to a stop and 31107 continued to coast at a speed of 70–80 miles per hour into the road vehicle parked across the eastbound 'up' line.

For the crash, locomotive 31107 received a special black livery with the slogan "Level crossings — Don't run the risk" along the side in white lettering. The final 5 minute segment, presented by Jeremy Clarkson, was originally scheduled for 4 February 2007 but was rescheduled, apparently due to a fatal crossing crash at Dingwall two days earlier.[4][5] It was eventually aired on BBC Two on 25 February 2007, shortly after the Cumbria derailment. A repeat of the programme was pulled following a further level-crossing accident.[6][7][8][9]

Another Class 31 was used in an episode of Dalziel and Pascoe, where it crashed into a coach. This was filmed at Wansford railway station level crossing on the Nene Valley Railway.[citation needed]

Class 31 no. 31420 was also used in a train crash in the ITV series 'The Royal', though locomotive was tipped over onto its side and separated from its bogies.[citation needed]31414 has been used in the ITV drama Mobile and also in the BBC series Casualty with the former Gatwick Express coaches at the Ecclesbourne Valley Railway.

Class 31 no. 31108 appeared on 1st November 2010 in the BBC soap opera Eastenders. The scene shows Janine Butcher nearly being hit by a train on a level crossing, and was filmed at the Nene Valley Railway.[citation needed]

The first model of the Class 31 was made by Triang. Airfix model railways also chose to produce a Class 31 when Airfix entered the model train market in the mid 1970s. Lima also produced a model.

Currently the only 00 Gauge model of the Class 31 is that produced by Hornby since 2004.

2011 is expected to see the return of the Lima model under the Hornby Railroad banner.

An N Gauge model of the Class 31 is currently produced by Graham Farish, while Lima have also produced a model.