The Class 66 is a six axle diesel electric freight locomotive developed in part from the British Rail Class 59, for use on the railways of the UK. Since its introduction the class has been successful and has been sold to British and other European railway companies. In Continental Europe it is marketed as the EMD Series 66 (JT42CWR).

On the privatisation of British Rail's freight operations in 1996, English, Welsh and Scottish Railway bought most of British Rail's freight operations. Many of the locomotives that EWS inherited were either at the end of their useful life or of doubtful reliability. EWS approached General Motors Electro-Motive Division (EMD), who offered their JT42CWR model which had the same bodyshell as the EMD built Class 59; this gave the advantage of having a locomotive of known clearance. The engine and traction motors were different models from those in the Class 59. Additionally, the Class 66s incorporated General Motors' version of a steering bogie - designed to reduce track wear and increase adhesion on curves.

The initial classification was as Class 61, then they were subsequently given the Class 66 designation in the British classification system (TOPS). Two hundred and fifty were ordered and built in London, Ontario, Canada.[1]

In 1998, Freightliner placed an order for locomotives. They were followed by GB Railfreight, and then Direct Rail Services.

Although sometimes unpopular with many rail enthusiasts, due to their ubiquity and having caused the displacement of several older types of (mostly) British built locomotives, their high reliability has helped rail freight to remain competitive.

The Class 66 design has also been introduced to Continental Europe where it is currently certified for operations in Germany, the Netherlands, Belgium, Luxembourg, Sweden, Norway, Denmark, France, and Poland, with certification pending in the Czech Republic and Italy. They currently operate on routes between Sweden and Denmark and between Germany, Belgium, The Netherlands and Poland. As a result of its well-known British identity, EMD Europe markets the locomotive as "Series 66".

English, Welsh and Scottish Railway (now DB Schenker Rail (UK)) was the first to order Class 66 locomotives, with the first of the two hundred and fifty locomotives shipped to Britain in mid-1998. The final locomotive entered traffic just two years later, in mid-2000. The EWS fleet includes five locomotives capable of banking heavy trains over the Lickey Incline—on these specific locomotives, the knuckle coupler has been modified to allow remote releasing from inside the cab, whilst in motion.[2] It also includes fifteen locomotives fitted with RETB signalling equipment, for working in northern Scotland and RETB-fitted branchlines.[2]

Freightliner 66610 on the East Coast Main Line near York

In 2000 a new Class 66/6 sub-class was built, with a lower gear ratio, enabling heavier trains to be hauled, albeit at slower speed. There are presently 25 examples of this class, numbered 66601-625.

During 2004 the company also took delivery of the most recent Class 66/9 sub-class of the locomotive, which are a low-emission variant. All new locomotives for all companies are now of the low-emission "T2" type. The original two such locomotives remain as 66951/52. 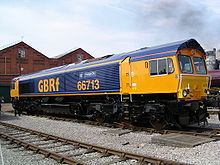 During April 2006 five more locomotives (numbered 66718-722) were delivered. These are of the low-emission kind, similar to the 66/9s in service with Freightliner. Their livery differs slightly from the original seventeen, using a lighter blue and 'Metronet' branding on the sides. Their primary use was to work infrastructure trains for Metronet, but now for Metronet's successor Transport for London. A further order for five more locomotives (66723-727) was delivered in early 2007, and painted in a new livery of pink, white and blue, which is similar to First Group's corporate livery. In April 2008 First GBRf took delivery of another five locomotives (66728 - 732), again painted in the corporate First Group livery.

As of February 2011 66401-66405 have started to be renumbered into the 66/7 number series and will eventually be repainted.[citation needed] 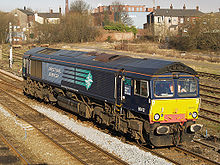 DRS have now returned 401-10 as they are high emission locos thus meaning they are the newest fleet set to reach storage.[when?][citation needed]. DRS 66s now see regular work on Nuclear Flask trains running from several locations as Carlisle Kingmoor, Sellafield, Crewe, Dungeness, Willesden, Seaton and Berkeley. This is due to the ageing class 20s needing major overhauls. Most are now in storage or on hire to GBRF to deliver new LUL stock.[citation needed]

Colas Rail took over the ex-Advenza Cemex Cement flow after the company went bust utilising ex Advenza locomotives. During 2010 they took on 66843 and laterly 66844 which both had been on lease to GBRf, they also took on ex DRS 66410 which was renumbered 66845.

Advenza Freight, a Cotswold Rail subsidiary, operated class 66841-844. They were primarily used on Advenza's scrap and cement flows. The locomotives originated from the batch that DRS returned. Advenza Freight went bust in October 2009 and the class 66s returned to storage.

Fastline Freight, part of Jarvis PLC, which operated intermodal services between Doncaster and Birmingham International Railfreight Terminal (BIFT), and Thamesport, in North Kent, using refurbished Class 56 locomotives, ordered five Class 66/3 locomotives to operate a coal flow from Hatfield Colliery. They were delivered in 2008.[4] Following the demise of Jarvis in 2010, and Fastline going into administration on 29 March 2010,[5] these locomotives were placed in store, being towed to DRS Carlisle Kingmoor or Crewe Gresty Bridge depot for storage.[6]

Minor differences between different orders, and different operating companies have resulted in a number of subclasses being defined.[7]

The British Trade Union ASLEF has complained that the locomotives are unfit and unsafe to work in, citing a lack of air conditioning, and poor seating and noise levels.

In April 2007 ASLEF proposed a ban on their members driving the locomotives during the British summer 2007 period. Keith Norman, ASLEF's general secretary, described the cabs as "unhealthy, unsafe and unsatisfactory". Research showed that in July 2006, when the weather had been extremely hot, the number of times a driver had passed a red signal increased.[10] EWS entered into discussions and make amendments to a series of trial locomotives,[10] GB Railfreight and Freigtliner also investigated cab improvemetns.[11] In June 2007 progress on the issue led ASLEF to withdraw its threat of industrial action.[12]

In Norway CargoNet related complaints about the noise levels in the CD66 variant of the Class 66 resulted in higher pay rates for drivers.[13]

66 048 lies in the snow and trees following the Carrbridge derailment.

66 521 was involved in the 2001 Great Heck rail crash which resulted in 10 deaths including the driver Stephen Dunn.[14]

On 9 February 2006, a freight train, hauled by EWS 66 017, derailed at Brentingby Junction, near Melton Mowbray. Having passed a signal at danger the locomotive and the first three wagons were derailed at catch points at the end of the Up Goods Loop. There were no injuries.[15]

On 4 January 2010, a freight train hauled by DB Schenker 66 048 derailed at Carrbridge in snowy weather, blocking the Highland Main Line.[16] Having passed a signal at danger the train was derailed at trap points,[17] subsequently falling down an embankment into trees and injuring the two crew members. The loco was hauling container flats from Inverness to Mossend Yard on behalf of Eddie Stobart.[18] The line was reopened on 12 January.[19]