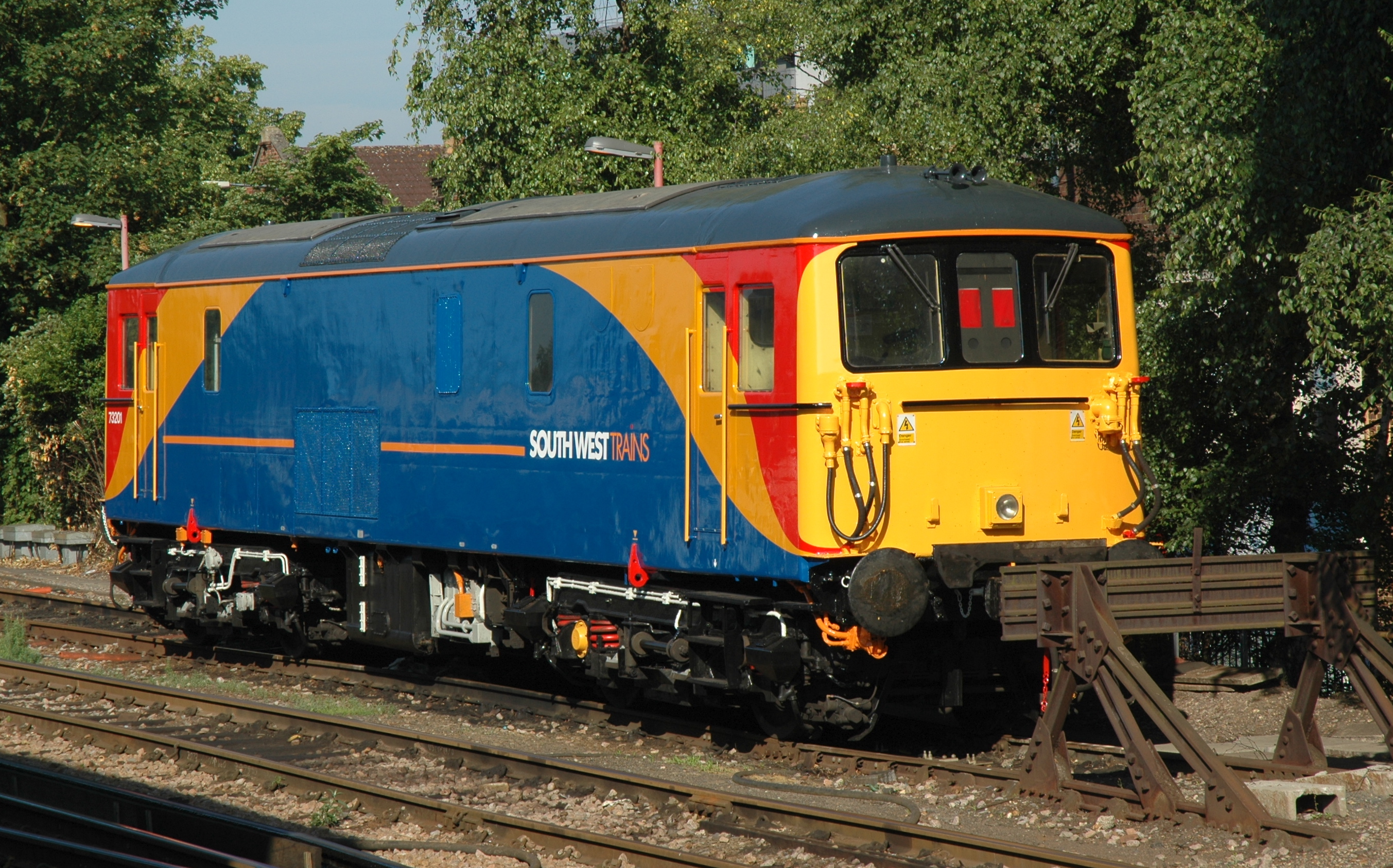 The Class 73 s are very unusual in that they can operate from a 750 V DC third-rail supply but also have a diesel engine to allow them to operate on non-electrified routes. This makes them very versatile, although the diesel engine produces less power than is available from the third-rail supply so they rarely stray from the former Southern Region of . Following the withdrawal of the more powerful Class 74 electro-diesels in 1977, the Class 73 is now unique on the British rail system.

The remaining 43 locomotives were built by between 1965 and 1967. They were initially classified as Class JB and numbered E6007-E6049. They differed slightly from the six earlier machines, most notably having an increased tractive effort as well as a higher maximum speed (90 as opposed to 80). Following the introduction of TOPS, they became Class 73/1 and were renumbered 73101-73142. One locomotive, E6027, had already been withdrawn following accident damage and so was not renumbered.

Since privatisation, the Class 73 fleet has been reduced in size following the large-scale withdrawals of the and fleets. However, many smaller operators have acquired locomotives, so their continued use is assured for the foreseeable future.

own two Class 73 locomotives, which have been specially modified to be enable them to haul a Eurostar unit. The two locomotives, nos. 73118 and 73130, have had additional coupling equipment fitted, and are primarily used to rescue failed Eurostar sets, or to haul them over non-electrified routes. They were rarely used away from . With Eurostar moving their operations to the new Temple Mills depot, the Class 73 locomotives are redundant, and have been loaned to educational initiatives in East London and South Wales.

(previously Fragonset Railways) bought several redundant locomotives from EWS. Most of these were initially stored at various locations around the country, including preservation sites, such as the Mid-Hants Railway, the way and the . Some of these locomotives were repaired for use on these s, such as no. 73134 on the Dartmoor Railway.

One locomotive, no. 73107 "Spitfire" returned to mainline traffic in 2004 following overhaul. It was repainted in Fragonset's black freight livery, and was expected to be used on empty coaching stock moves associated with charter trains. It was regularly hired to from late 2004 as cover for their fleet and was based at C2C's East Ham Depot along with the Blue Pullman Rake. In 2007 it was acquired by and has been overhauled and repainted in a GBRf-esque livery at St. Leonards Depot.

Until mid 2005, GX operated several Class 73s with Mk 2 EMU sets with GLV luggage vans.Most have now been withdrawn and replaced by EMUs. However 73202 "Dave Berry" has been retained as a "Thunderbird" unit to rescue other failed locomotives.

is the newest operator of Class 73 locomotives, having bought six redundant Gatwick Express locomotives, numbers 73203-207 and 73209. Four of these (73204-206 and 209) have now been returned to traffic after overhaul by Fragonset at . They have been repainted in the company's blue and orange livery, and named after female employees. The locomotives are primarily used on engineering trains originating from and . FirstGBRf has since purchased 73208 and repainted it into BR Blue. It should be noted that FirstGBRf is the new name for GB Railfreight.

had a fleet of four Class 73/0 locomotives, based at , for use on shunting and other departmental duties. Two, nos. 73001 and 73006 were repainted into Merseyrail's yellow livery. They were later fitted with sandite discharging equipment and reclassified as Class 73/9. The locomotives were withdrawn from traffic by 2002, and all four were later sold for preservation.

inherited two redundant Gatwick Express locomotives, nos. 73212 and 73213, from its predecessor . These were overhauled and painted in the company's blue and green livery. They are used on engineering trains associated with an upgrade of electrical supply systems on the former Southern Region.

A third locomotive, no. 73141, was originally bought for spare parts, but it has now been returned to traffic in case of failure of one of the other two locomotives.

The locomotives have been repainted into Network Rail all-over-yellow with red buffer beams. 73212 and 213 can usually been seen in Tonbridge West yard.

inherited one locomotive, no. 73109, which is used as a "Thunderbird" rescue locomotive. It was named in 1990 to commemorate the 50th anniversary of the . It is affectionately known as "BoB" by rail enthusiasts.

South West Trains have recently expanded their fleet, by acquiring two more locomotives, nos. 73201 and 73235. Both are former Gatwick Express locomotives. The first of these, no. 73235, was overhauled in early 2005 and repainted in the new Desiro blue livery. It was joined by no. 73201 later in the same year. Around the same time, no. 73109 was also repainted into the new blue livery. The blue livery was chosen to match the Desiro stock, as almost all the slam-door stock had been withdrawn by mid-2005.

The Class 73 Locomotive Preservation Company formed in 2004 manage Electro-Diesel Locomotive 73136 at Stewerts Lane Depot73136, the last 73 operated by EWS, is now fully fitted with TPWS & OTMR equipment following the implementation of OTMR during the summer of 2006.The locomotive is registered for use on the national rail network and is available for either short term 'spot' hire or medium term contracts. With qualified staff employed by the company, they are able to offer the locomotive fully maintained and available at short notice.In August 2006, the company were contracted by GBRf to repaint GBRf's 73208 into BR Blue for future use on charter work with 73136. The company are also in the process of restoring 73210 at Stewarts Lane ready for it to be based on the Mid Norfolk Railway

. .Several locomotives have been preserved on s, where perforce they run on their diesel engines: no preserved line has third rail electrification. They are particularly popular because they have a small diesel engine and hence are efficient with speeds normally limited to 25 mph, yet they are big mainline locomotives and thus more attractive than diesel shunters with similar-sized engines. Of note are the first built locomotive, No. 73001, and the former Pullman locomotive, No. 73101.

73136 has been rescued from a scrap yard and rebuilt by a group of enthusiasts to main-line standards. It is certified by Network Rail for use on the main line at a speed of 90 mph.

Some of the class have ended far from their former working routes, particularly 73119 on the in northeast .