The North Norfolk Railway (NNR)– also known as the "Poppy Line" – is a heritage steam railway in Norfolk, England, running between the coastal town of Sheringham and Holt, It cuts through the countryside to the east of Weybourne with views of its windmill and passes through the well preserved country station which also houses a locomotive shed together with a carriage maintenance and restoration centre. The Norfolk Orbital Railway, an independent organisation, has plans to join and link the NNR with the Mid-Norfolk Railway. 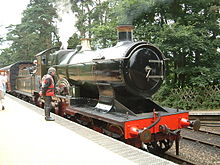 'City of Truro', pictured here at Holt station, visited the railway in 2008 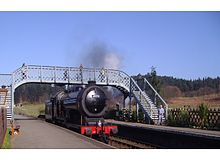 The line, which is just over 5 miles (8.0 km) long, once formed part of the Midland and Great Northern Joint Railway. At Sheringham the line has now been reconnected to the National Rail network via an 'occasional use' level crossing.

There are two stops between Sheringham and Holt, Weybourne (about 1 mile (1.6 km) from the village) and Kelling Heath.

The NNR operates both steam and diesel hauled services, and organises a programme of seasonal special events. A museum has been built at Holt to display artifacts from the Midland and Great Northern Railway. The station building at Holt was originally built at Stalham in 1883 and was moved, brick by brick in 2002, to be re-erected in its current location. This project was awarded second place in the 2006 railway buildings competition by the Heritage Railways Association of the UK. The signal box at the station, is over 100 years old and was restored on site. The full signalling system at Holt, with 14 signals as well as the box, was commissioned in 2009 - winning the HRA signalling award for that year. The box was formerly at Upper Portland Sidings in the East Midlands.

The Railway won the 'Independent Railway of the Year' award in 2006.

Work on rebuilding the line started in 1965, and on 4 June 1967, two steam locomotives were delivered. The operating company, North Norfolk Railway plc, was launched in 1965 following the granting of two Light Railway Orders. In May 1973, the railway was the scene of filming of the episode The Royal Train of the popular TV programme Dad's Army. Another scheme, the Norfolk Orbital Railway plans to link the town to the market town at Fakenham.[1]

The main restoration sheds are at Weybourne. They have room to accommodate four standard length British Railways Mark 1 coaches and six large steam or diesel locomotives. New carriage storage sheds have been built near Holt with Heritage Lottery Funding. These have the capacity to store the equivalent of 18 Mark 1 coaches.

Preserved 7MT 70013 Oliver Cromwell approaching Weybourne on the North Norfolk Railway on 11 March 2010. The loco is hauling a train from London to celebrate reinstatement of the link to the national railway system at Sheringham.

There are several improvements planned for the railway. Now that the level crossing at Sheringham has been reinstated, one of the next projects is to rebuild the demolished buildings on Platform 2 at Sheringham station. The stanchions for the project are at Weybourne. This is seen as a medium to long term project, but a start may be made soon on erecting the stanchions. The project would also see a footbridge replaced to complete the original station look.

Holt station is also being developed; its progress has been rapid over the last few years. Projects include installing the weighbridge from Cambridge station, putting up a footbridge, and erecting up a mock 'carriage house' to replicate the houses made with old railway carriages in the war years. 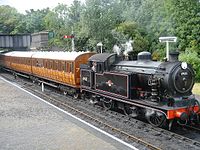 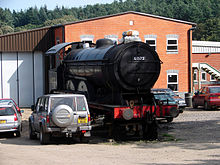 Locomotives Currently away on loan 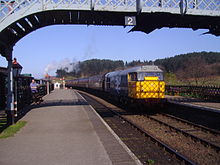 Over the years, several locomotives have been based on the line for a number of years before moving on to alternative locations (or in one case, being cut up for scrap).

Built by Kitson & Co. in 1933 (Designed by Manning Wardle for Stewart and Lloyds).
Worked at Stewart and Lloyds Pen Mill shed as S&L No 45 and on the NNR (1970-1985).
This was the engine featured in [[BBC] Television's Dad's Army series, 'the Royal Train' episode.
Currently undergoing heavy overhaul at Pitsford & Brampton Station on the Northampton & Lamport Railway.

Built by Andrew Barclay Sons & Co. and ran on the NNR as 'M&GN No. 100'.
Now based at the Scottish Industrial Railway Centre, operated by the Ayrshire Railway Preservation Group.

Built by Peckett and Sons Ltd. in 1939, and finally based at National Coal Board, Ashington, Northumberland.
Based at the NNR from April 1969 to October 1991 (usually painted bright yellow).
Now operational at the North Tyneside Steam Railway (renamed 'Jackie Milburn 1924-1988').

Built by the Hunslet Engine Company, Leeds and completed in 1953.
Ordered as one of a batch of 14 locomotives by the War Department in 1952.
Later transferred to the NCB, working in Michael Colliery, Fife.
It was purchased by NNR plc in 1986 and operated on the NNR until 2007.
Now being overhauled on the Great Central Railway's engine shed.

Built by the Hunslet Engine Company, Leeds and completed in 1954.
Originally delivered to the NCB Betteshanger Colliery, near Deal, Kent, in September 1954.
In early preservation on the Great Central Railway, the locomotive was found to be carrying the boiler/firebox
assembly originally fitted to (6)8009, one of the 75 locomotives purchased by the LNER from the Government
in 1946 and designated as Class J94.
Operating on the NNR between November 1993 and December 2004, the locomotive is now owned by the
Stainmore Railway Company Limited and is based at the Kirkby Stephen East railway station Heritage Centre in Cumbria.

Built by John Fowler & Co. and delivered to Fisons, Kings Lynn in 1945.
NNR works shunter from October 1973, used in much of the rebuilding of the section of the line between Sheringham and Weybourne.
Cut up on site, (Weybourne Railway Station) approx. November 1983. 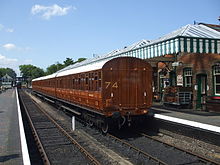 The Quad-art set at Sheringham Station

Other Heritage Railways and Museums in Norfolk: