Louisiana Department of Transportation and Development

Louisiana Department of Transportation and Development

The Louisiana Department of Transportation and Development (DOTD)[1] is a state government organization in charge of maintaining public transportation, roadways, bridges, canals, select levees, floodplain management, port facilities, commercial vehicles, and aviation which includes 69 airports, in the U.S. state of Louisiana. The agency has approximately five thousand personnel on staff and an operating budget of $2.3 billion. DOTD operations are run through nine district offices across the state.

The current DOTD Secretary is Sherri LeBas, appointed in June 2010 by Governor Bobby Jindal. Other functions of the DOTD are Dams (Dam Safety Program), flood control (Floodplain Management, water resource management (wells), and maintaining state run ferries and moveable bridge status[2]. The Louisiana Transportation Authority (LTA) is also under the DOTD[3], as well as the DOTD port construction and development. 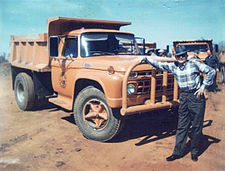 The Louisiana Highway Commission was established in 1921 under the administration of Governor John M. Parker, who pushed for the establishment of more gravel roads throughout the state. Act 47 of 1940 under Governor Sam Houston Jones reorganized the entire state government; under its provisions, the Department of Highways was designated as the successor to the old Highway Commission, and a director, appointed by the governor, was established as the executive head of the Department. Among the highway directors was Ray W. Burgess (1921–2006) of Baton Rouge, an appointee of Governor Jimmie Davis. Highway workers were originally political appointees but later gained job security under state civil service. Act 47 also created the Department of Public Works and transferred to that department the state’s administrative functions involving flood control, water management, and aeronautics.

The new Louisiana Constitution of 1976 (adopted in 1974) and Act 83 of 1977 abolished the Departments of Highways and Public Works and restructured them into the Department of Transportation and Development (DOTD), thereby encompassing related activities such as highways, public works, aviation, public transportation, and a number of transportation authorities, committees, boards and commissions. This form of organization continued until 1988 when Act 488 placed all agency functions under one of three offices: the Office of the Secretary, the Office of Engineering and the Office of Management and Finance.

Act 71 of 1998 again reorganized DOTD into its present functional arrangement of the Office of the Secretary and five other offices.

The DOTD has 9 district offices across the state. Each office is run by a "District Engineer Administrator".

The DOTD is in charge of Public Transportation and provides funding to parishes through grants and Louisiana Transit to provide transportation to the elderly, disabled, single working parents, and poor. Sometimes service is provided by transportation companies, or Council on Aging, Office of Community Services, St. Helena Parish Hospital, St. James Parish Government, and in St. Tammany the "East St. Tammany Mental Health Association, Inc."

Grant Parish is the only parish in Louisiana not participating in some form of public transportation.

DOTD has the responsibility of maintaining state highways and interstate highways under state jusrisdiction. This includes the maintenance and updating of existing highways as well as planning, design, and building of new highways.

The Transportation Infrastructure Model for Economic Development or TIMED Program[5] is an ongoing $5 billion dollar program which includes funding to widen over 500 miles (800 km) of Louisiana state highways from two lanes to four. 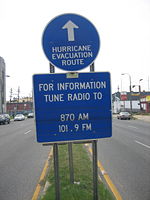 The DOTD has been active in addressing the increased awareness for effective evacuation plans in the event of hurricanes threatening southeast Louisiana, and the Greater New Orleans area in particular. Following lessons learned during Hurricane Georges in 1998 DOTD has constructed contraflow lanes,[14][15][16] crossover lanes, and made agreements with Mississippi officials to implement the contraflow plan in the event of future hurricane threats. This is a plan where all the traffic is directed the same direction and marked with appropriate signs and signals. These plans were tested and modified following Hurricane Ivan in 2004 as residents of the New Orleans area spent upwards of 18 hours in traffic. These changes included strategic distribution of traffic control devices, improved coordination of police personnel and wide distribution of information and maps to the public depicting the state's phased evacuation plan and the various contraflow routes. These changes were tested and proved successful in August 2005 when New Orleans and the surrounding parishes were placed under a mandatory evacuation in advance of Hurricane Katrina.[17]

The DOTD has a department for roadside vegetation granted by Act No. 682 of the Regular Session of the State Legislature of 1989. There is a DOTD Chief Architect and a DOTD Chief Engineer and each district has a "District Roadside Development Coordinator". Mowing of interstate and Louisiana highways are under the jurisdiction of Roadside Development but all road construction and improvements are subject to inspection and approval.

The department uses a 54 page manual that sets guidelines and rules for landscaping, wildflowers, mowing, and spraying herbicides and pesticides. The state has an aggressive stance on the preservation and planting of wildflowers. The guidelines state that mowing should be a minimum of three times a year on interstate highways and two times a year on state highways. The Environmental Protection Agency designated the Louisiana Department of Agriculture to enforce compliance of applicators of herbicides or pesticides with training provided by the Louisiana Extension program. The District Roadside Development Coordinator must be licensed by the state and be proficient in all aspects of pesticides and herbicides.

DOTD is the agency in charge of the Bridge management system for planning and design, building, inspection, and even replacement of bridges in Louisiana.

There are eight southern states listed in the "General Performance Information: Southern states comparison" chart. The National Bridge Inventory Report,[22] issued by the Federal Highway Administration (FHWA) through the LADOTD, list Deficient Bridges by state and highway system. The reporting was current as of December, 2008.

The DOTD is the authority over ports and port facilities in Louisiana.

DOTD operates and maintains the dam, water control structures, gates, spillway and related appurtenances on 20 state constructed reservoirs and is required to inspect all dams to ensure conformity with established standards and regulations[30]. The department works closely with the United States Army Corps of Engineers[31].

DOTD is the State Agency for the National Flood Insurance Program (NFIP). The state works in conjunction with FEMA on a 25%/75% ratio.

The DOTD is responsible for monitoring 62 airports in the state. A completed TIMED project of the DOTD is the Louis Armstrong New Orleans International Airport.

All commercial vehicles in the State of Louisiana are governed by the Dept of Public Safety.

The DOTD division of "Weights and Standards" is the office responsible for vehicle over-size permits on Louisiana highways. DOTD considers there are twelve stationary scale house locations in the state but for most "Point of entry" (POE) locations and divided highways there is a scale house on each side of the road[33]. When the scalehouse is open all trucks not equipped with "Prepass" must enter the scalehouse if directed. Exceptions are scales that have Weigh in motion scales. Dept of Public Safety enforcement officers (DPS) have portable scales and can weigh a vehicle anywhere it is safe.

The DOTD also maintains the Permits Electronic Routing Bridge Analysis(PERBA) that includes a "Trouble Board" of restricted roads throughout the state.