Hammond is the largest city in Tangipahoa Parish, Louisiana, United States. The population was 20,049 at the 2009 census. It is home to Southeastern Louisiana University. The city was the home base for production of the first season of the NBC television series In the Heat of the Night.

Hammond is the principal city of the Hammond Micropolitan Statistical Area, which includes all of Tangipahoa Parish.

The city is named for Peter Hammond (1797–1870)—possibly anglicized from Peter av Hammerdal (Peter of Hammerdal)—a Swedish immigrant who first settled the area around 1818. Peter, a sailor, had been briefly imprisoned by the British at Dartmoor Prison during the Napoleonic Wars; he broke jail, made his way back to the sea, and later left his ship in New Orleans, where he used his savings to buy then-inexpensive land northwest of Lake Pontchartrain. There he started a plantation to grow trees, which he made into masts, charcoal, and other products for the maritime industry in New Orleans. He transported the goods first to the head of navigation on the Natalbany River at Springfield, Louisiana.

In 1854, the New Orleans, Jackson & Great Northern Railroad (later the Illinois Central Railroad, now Canadian National Railway) came through the area, launching the city's emergence as a commercial and transport center. The point where the railroad met Peter's trail to Springfield was at first known as Hammond's Crossing. Peter Hammond is buried on the east side of town under the Hammond Oak along with his wife, three daughters, and a favorite slave boy (see inset showing the spreading oak at gravesite).

During the American Civil War, the city was a shoemaking center for the Confederacy. It later became a major shipping point for strawberries, earning it the title of "the Strawberry Capital of America".[1]

Today, Hammond is intersected by Interstates 12 and 55. Its airport has a long runway which serves as a backup landing site for Louis Armstrong New Orleans International Airport and serves as a major training site for the Louisiana Army National Guard. Approximately 15 miles (24 km) south of Hammond, on both the railroad and Interstate 10, lies Port Manchac, which provides egress via Lake Ponchartrain with the Gulf of Mexico. The combination of highway-rail-air-sea transportation has transformed modern Hammond from a strawberry capitol to a transportation capital. The city hosts numerous warehouses and is a distribution point for Walmart and other businesses, and Southeastern Louisiana University in Hammond offers the state's only academic degree in supply chain management. 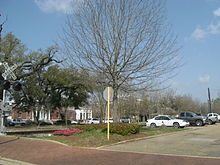 The 19th-century shoemaking industry was the work of Charles Emery Cate, who bought land in the city in 1860 for a home, a shoe factory, tannery and sawmill. Toward the end of the war, Cate laid out the city grid, using the rail line as a guide and naming several of the streets after his sons.

After the American Civil War, light industry and commercial activities were attracted to the town. By the end of the century, the town had become a stopping point for northerners traveling south and for New Orleanians heading north to escape summer yellow fever outbreaks.

Intersection of LA 1065 (North Cherry Street) and US 190 (East Thomas Street) in Hammond's Historic District. The building in the background is Dantone's Grocery, founded in 1912 by Italian immigrants.

In the 1920s, David William Thomas edited a weekly newspaper in Hammond prior to moving to Minden, the seat of Webster Parish. There, he was elected mayor in 1936.

In 1932 Hodding Carter founded the now-defunct Hammond Daily Courier, which he left in 1939 to move to Greenville, Mississippi, where he later received a Pulitzer Prize for his reporting on the Civil Rights Movement.[2]

During World War II, the Hammond Airport (now Hammond Northshore Regional Airport) served as a detention camp for prisoners of war from Nazi Germany. Additionally, the U.S. Army established and used the 15,216-acre (61.58 km2) Hammond Bombing and Gunnery Range east of the city.[3]

In 1953, John Desmond opened the first architectural firm in Hammond. He was chief architect of the Tangipahoa Parish School Board for some two decades before he relocated to Baton Rouge.[4] 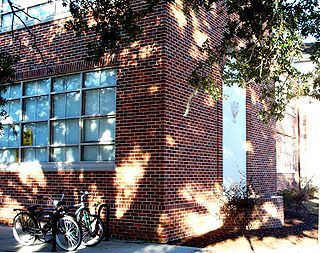 Lucius McGehee Hall on the campus of Southeastern Louisiana University in Hammond is a sturdy example of Depression Gothic architecture. It is on the National Register of Historic Places.

In 1980, police arrest a man for painting a picture of Mickey Mouse flipping the bird and saying "Hey Iran"

After Hurricane Katrina, New Orleans attorney, political activist, and state government watchdog C.B. Forgotston relocated to Hammond in 2006. Lawson Swearingen, a former Democratic member of the Louisiana State Senate and a former president of the University of Louisiana at Monroe, resides in Hammond, where he is a professor of management at Southeastern Louisiana University.

Hammond's proximity to New Orleans and Baton Rouge - less than an hour from each - has begun to stimulate growth. Tangipahoa Parish is becoming one of the newest suburbs to both cities. Hammond and Tangipahoa Parish are now among the fastest-growing cities and parishes in Louisiana. There is an abundance of new development, both commercial and residential, as well as numerous hotels which absorb overflowing demand for rooms near major events in New Orleans.

Southeastern's Columbia Theatre, constructed in 1928 and renovated in the 1990s for $5.6 million, is a significant cultural venue in Hammond's Historic District.

There were 6,251 households out of which 29.4% had children under the age of 18 living with them, 34.9% were married couples living together, 20.2% had a female householder with no husband present, and 40.7% were non-families. 28.7% of all households were made up of individuals and 8.6% had someone living alone who was 65 years of age or older. The average household size was 2.51 and the average family size was 3.19. 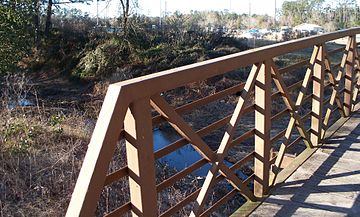 Ponchatoula Creek, the stream along which Peter Hammond settled, has figured prominently in development of Hammond, Louisiana. Here this footbridge crosses a tributary between Southeastern's University Center and spacious North Park.

Southeastern Louisiana University is a large regional university based in Hammond and is one of the city's largest employers. It was established in 1925 through the efforts of the educator Linus A. Sims, then the principal of Hammond High School. The city's public schools are part of the Tangipahoa Parish School System and include Hammond High School, Hammond Junior High, Eastside Elementary, Westside Elementary, Southeastern Louisiana University Laboratory School, and Crystal Academy (alternative school).

Amtrak, the national passenger rail system, is a common sight in Hammond. The old station is still in use and is located right in the middle of downtown.

Part of Hammond's success is due to its location at the junction of two heavily travelled interstate highways:

State highways serving the area include:

Hammond is overlapped by most of the mass media in Baton Rouge and New Orleans and has the following mass media of its own: