The cavaquinho (pronounced [kavɐˈkiɲu] in Portuguese) is a small string instrument of the European guitar family with four wire or gut strings. It is also called machimbo, machim, machete (in the Portuguese Atlantic islands and Brazil), manchete or marchete, braguinha or braguinho, or cavaco. 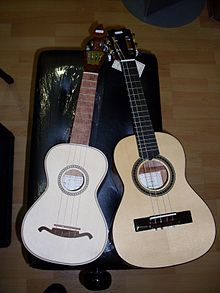 The most common tuning is D-G-B-D (from lower to higher pitches); other tunings include D-A-B-E (Portuguese ancient tuning, made popular by Júlio Pereira) and G-G-B-D and A-A-C#-E. Guitarists often use D-G-B-E tuning to emulate the highest four strings of the guitar.[1] The G-C-E-A tuning is sometimes used to emulate the soprano/tenor ukulele,[2] an instrument developed from the cavaquinhos brought to Hawai'i by Portuguese immigrants in the late 19th century.[3]

The origins of this Portuguese instrument are not easily found. Gonçalo Sampaio, who explains the survival of Minho region’s archaic and Hellenistic modes by possible Greek influences on the ancient Gallaeci of the region, stresses the link between this instrument and historical Hellenistic tetrachords. The author holds that the cavaquinho and the guitar may have been brought to Braga by the Biscayans.[citation needed]

There are different kinds of cavaquinho. The minhoto cavaquinho, associated with the Minho region in Portugal, has the neck on the same level as the body, and the sound hole is usually in the raia format (raia is Portuguese for batoidea).

The Brazilian cavaquinho, associated with Brazil, as the cavaquinhos associated with Lisboa and Madeira, differs from the minhoto in that its neck is elevated in relation to the body, and the sound hole is traditionally round; thus it is more akin to the traditional guitar.

It is a very important instrument in Brazilian music, especially for samba and choro. The standard tuning in Brazil is D-G-B-D (although D-G-B-E and the mandolin tuning G-D-A-E are also used for soloing). Some of the most important players and composers of the instrument's Brazilian incarnation are: Waldir Azevedo, Henrique Cazes, Paulinho da Viola, Luciana Rabello, Alceu Maia, Mauro Diniz and Paulinho Soares. The samba cavaco is the connection between the rhythm and harmony sections, playing the rhythm comping. It is played with a pick, with sophisticated percussive strumming beats.

The cavaquinho is also found in other places where the Portuguese left an imprint, such as Cape Verde and the USA (especially Hawaii), and became an important part of the popular music of those places.[citation needed]

During the 15th Century the four-course cavaquinho was brought to Africa by Portuguese sailors.[citation needed]