The Treaty of Tordesillas (Portuguese: Tratado de Tordesilhas, Spanish: Tratado de Tordesillas), signed at Tordesillas (now in Valladolid province, Spain), 7 June 1494, divided the newly discovered lands outside Europe between Spain and Portugal along a meridian 370 leagues[note 1] west of the Cape Verde islands (off the west coast of Africa). This line of demarcation was about halfway between the Cape Verde Islands (already Portuguese) and the islands discovered by Christopher Columbus on his first voyage (claimed for Spain), named in the treaty as Cipangu and Antilia (Cuba and Hispaniola). The lands to the east would belong to Portugal and the lands to the west to Spain. The treaty was ratified by Spain (at the time, the Crowns of Castile and Aragon), 2 July 1494 and by Portugal, 5 September 1494. The other side of the world would be divided a few decades later by the Treaty of Zaragoza or Saragossa, signed on 22 April 1529, which specified the antimeridian to the line of demarcation specified in the Treaty of Tordesillas. Originals of both treaties are kept at the Archivo General de Indias in Spain and at the Arquivo Nacional da Torre do Tombo in Portugal.[5] 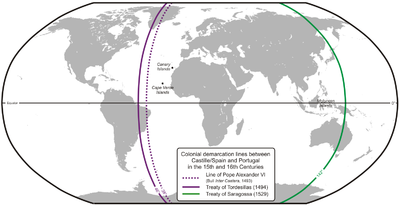 Lines dividing the non-Christian world between Castille (modern Spain) and Portugal: the 1494 Tordesillas meridian (purple) and the 1529 Zaragoza antimeridian (green)

The Treaty of Tordesillas was intended to resolve the dispute that had been created following the return of Christopher Columbus. In 1481, the papal bull Æterni regis had granted all land south of the Canary Islands to Portugal. On 4 May 1493 the Spanish-born Pope Alexander VI decreed in the bull Inter caetera that all lands west and south of a pole-to-pole line 100 leagues west and south of any of the islands of the Azores or the Cape Verde Islands should belong to Spain, although territory under Christian rule as of Christmas 1492 would remain untouched. The bull did not mention Portugal or its lands, so Portugal couldn't claim newly discovered lands even if they were east of the line. Another bull, Dudum siquidem, entitled Extension of the Apostolic Grant and Donation of the Indies and dated 25 September 1493, gave all mainlands and islands then belonging to India to Spain, even if east of the line. The Portuguese King John II was not pleased with that arrangement, feeling that it gave him far too little land — it prevented him from possessing India, his near term goal (as of 1493, Portuguese explorers had only reached the east coast of Africa). He opened negotiations with King Ferdinand and Queen Isabella of Spain to move the line to the west and allow him to claim newly discovered lands east of the line. The treaty effectively countered the bulls of Alexander VI and was sanctioned by Pope Julius II via the bull Ea quae of 24 January 1506.[6] Even though the treaty was negotiated without consulting the Pope, a few sources call the resulting line the Papal Line of Demarcation.[7]

Very little of the newly divided area had actually been seen by Europeans, as it was only divided via the treaty. Spain gained lands including most of the Americas. The easternmost part of current Brazil was granted to Portugal when Pedro Álvares Cabral landed there while he was en-route to India. Some historians contend that the Portuguese knew of the South American bulge that makes up most of Brazil before this time, so his landing in Brazil was not an accident.[8] The line was not strictly enforced — the Spanish did not resist the Portuguese expansion of Brazil across the meridian. The treaty was rendered meaningless between 1580 and 1640 while the Spanish King was also King of Portugal. It was superseded by the 1750 Treaty of Madrid which granted Portugal control of the lands it occupied in South America. However, the latter treaty was immediately repudiated by Spain. The First Treaty of San Ildefonso settled the problem, with Spain acquiring territories east of the Uruguay river and Portugal acquiring territories in the Amazon basin. 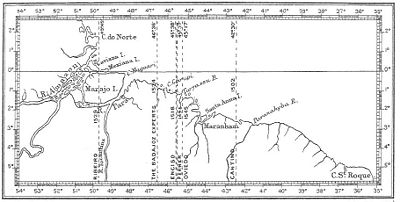 The Treaty of Tordesillas only specified the line of demarcation in leagues from the Cape Verde Islands. It did not specify the line in degrees, nor did it identify the specific island or the specific length of its league. Instead, the treaty stated that these matters were to be settled by a joint voyage, which never occurred. The number of degrees can be determined via a ratio of marine leagues to degrees applied to the Earth regardless of its assumed size, or via a specific marine league applied to the true size of the Earth, called "our sphere" by Harrisse.

Antimeridian: Moluccas and Treaty of Zaragoza 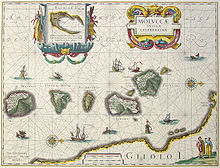 Initially, the line of demarcation did not encircle the Earth. Instead, Spain and Portugal could conquer any new lands they were the first to discover, Spain to the west and Portugal to the east, even if they passed each other on the other side of the globe.[14] But Portugal's discovery of the highly valued Moluccas in 1512 caused Spain to argue in 1518 that the Treaty of Tordesillas divided the Earth into two equal hemispheres. After the surviving ships of Magellan's fleet visited the Moluccas in 1521, Spain claimed that those islands were within its western hemisphere. In 1523, the Treaty of Vitoria called for the Badajoz Junta to meet in 1524, at which the two countries tried to reach an agreement on the anti-meridian but failed.[15] They finally agreed via the Treaty of Zaragoza (or Saragossa) that Spain would relinquish its claims to the Moluccas upon the payment of 350,000 ducats of gold by Portugal to Spain. To prevent Spain from encroaching upon Portugal's Moluccas, the anti-meridian was to be 297.5 leagues or 17° to the east of the Moluccas, passing through the islands of Las Velas and Santo Thome.[16] This distance is slightly smaller than the 300 leagues determined by Magellan as the westward distance from los Ladrones to the Philippine island of Samar, which is just west of due north of the Moluccas.[17]

The Moluccas are a group of islands just west of New Guinea. However, unlike the large modern Indonesian archipelago of the Maluku Islands, to 16th-century Europeans the Moluccas were a small chain of islands, the only place on Earth where cloves grew, just west of the large north Malukan island of Halmahera (called Gilolo at the time). Cloves were so prized by Europeans for their medicinal uses that they were worth their weight in gold.[18][19] 16th- and 17th-century maps and descriptions indicate that the main islands were Ternate, Tidore, Moti, Makian and Bacan, although the last was often ignored even though it was by far the largest island.[20][21][22] The principal island was Ternate at the chain's northern end (0°47'N, only 11 kilometres (7 mi) in diameter) on whose southwest coast the Portuguese built a stone fort (Forte de São João Baptista de Ternate (pt)) during 1522–23,[23] which could only be repaired, not modified, according to the Treaty of Saragossa. This north-south chain occupies two degrees of latitude bisected by the equator at about 127°24'E, with Ternate, Tidore, Moti, and Makian north of the equator and Bacan south of it.

Although the treaty's Santo Thome island has not been identified, its "Islas de las Velas" (Islands of the Sails) appear in a 1585 Spanish history of China, on the 1594 world map of Petrus Plancius, on an anonymous map of the Moluccas in the 1598 London edition of Linschoten, and on the 1607 world map of Petro Kærio, identified as a north-south chain of islands in the northwest Pacific, which were also called the "Islas de los Ladrones" (Islands of the Thieves) during that period.[24][25][26] Their name was changed by Spain in 1667 to "Islas de las Marianas" (Mariana Islands), which include Guam at their southern end. Guam's longitude of 144°45'E is east of the Moluccas' longitude of 127°24'E by 17°21', which is remarkably close by 16th-century standards to the treaty's 17° east. This longitude passes through the eastern end of the main north Japanese island of Hokkaidō and through the eastern end of New Guinea, which is where Frédéric Durand placed the demarcation line.[27] Moriarty and Keistman placed the demarcation line at 147°E by measuring 16.4° east from the western end of New Guinea (or 17° east of 130°E).[28] Despite the treaty's clear statement that the demarcation line passes 17° east of the Moluccas, some sources place the line just east of the Moluccas.[29][30][31]

The Treaty of Saragossa did not modify or clarify the line of demarcation in the Treaty of Tordesillas, nor did it validate Spain's claim to equal hemispheres (180° each), so the two lines divided the Earth into unequal hemispheres. Portugal's portion was roughly 191° whereas Spain's portion was roughly 169°. Both portions have a large uncertainty of ±4° due to the wide variation in the opinions regarding the location of the Tordesillas line.

Portugal gained control of all lands and seas west of the Saragossa line, including all of Asia and its neighboring islands so far "discovered," leaving Spain most of the Pacific Ocean. Although the Philippines were not named in the treaty, Spain implicitly relinquished any claim to them because they were well west of the line. Nevertheless, by 1542, King Charles V decided to colonize the Philippines, judging that Portugal would not protest too vigorously because the archipelago had no spice, but he failed in his attempt. King Philip II succeeded in 1565, establishing the initial Spanish trading post at Manila.

Besides Brazil and the Moluccas, Portugal would eventually control Angola, Mozambique, Guinea-Bissau, and São Tomé and Príncipe in Africa; Goa and Daman and Diu in India; and East Timor and Macau in the Far East.

Effect on other European powers

The treaty was historically important in dividing Latin America, as well as establishing Spain in the western Pacific until 1898. However, it quickly became obsolete in North America, and later in Asia and Africa, where it affected colonization. It was ignored by other European nations, and with the decline of Spanish and Portuguese power, the home countries were unable to hold many of their claims, much less expand them into poorly explored areas. Thus, with sufficient backing, it became possible for any European state to colonize open territories, or those weakly held by Lisbon or Madrid. The attitude towards the treaty that other governments had was expressed in a statement attributed to France's King Francis I, "Show me Adam's will!"[32]

The pope's role in negotiating the treaty provoked hostility towards the papacy throughout Europe, which, combined with other irritants, eventually helped to trigger the Protestant Reformation of the 16th century in which most of the northern European states severed their ties with the Church in Rome.[citation needed]

The Treaty of Tordesillas has been invoked by Chile in the 20th century to defend the principle of an Antarctic sector extending along a meridian to the South Pole, as well as the assertion that the treaty made Spanish (or Portuguese) all undiscovered land south to the Pole.[33]

The Treaty of Tordesillas has been invoked by Argentina in the 20th century as part of its claim to the Falkland Islands.[34]