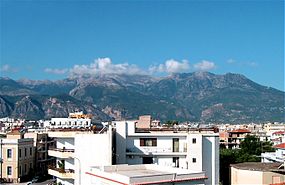 Mount Taygetus seen from Sparti, located on the east side of the Eurotas rift valley. The fault scarps marking the strike of the Sparta Fault are visible on the eastern face of the mountain.

Mount Taygetus, Taugetus, or Taigetus (Greek: Ταΰγετος, Taygetos) is a mountain range in the Peloponnese peninsula in Southern Greece. The name is one of the oldest recorded in Europe, appearing in the Odyssey.[1] In classical mythology, it was associated with the nymph Taygete. During Byzantine times and up until the 19th century, the mountain was also known as Pentedaktylos (Greek for five-fingered, a common name during that period).

The Taygetus Massif is about 100 km (62 mi) long, extending from the center of the Peloponnese to Cape Matapan, its southernmost extremity. It contains the tallest mountain in the Peloponnese, the Profitis Ilias summit, reaching 2,407 m (7,897 ft); this is probably the classical Mount Taleton mentioned by Pausanias.[2] The summit is an ultra prominent peak. It is prominent above the Isthmus of Corinth, which separating the Peloponnese from mainland Greece, rises only to approximately 60 m (200 ft). Numerous creeks wash down from the mountains and the Evrotas river has some of its headwaters in the northern part of the range. 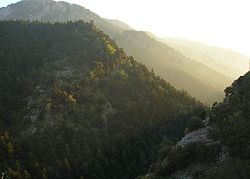 Taygetus overlooks the cities of Sparti and Kalamata, whose skyline it dominates. The mountain range lies within the prefectures of Arcadia, Laconia and Messenia. Taygetus is crossed by Greek National Road 82, which links Kalamata to Sparti and separates Northern Taygetus from the Central Range. The Rindomo Gorge separates the Central Range from Southern Taygetos. The section of Taygetus that forms the backbone of the Mani Peninsula is also known as Saggias, and is often not considered part of Taygetus. The central part of the mountain range is commonly called "Skoteini Plevra", which means "the dark side" because the villages located there do not receive as much sunshine in the early morning and the late afternoon hours. 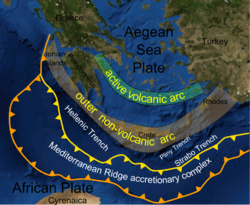 Hellenic arc, a subduction zone. The arrows give the direction of plate movement. The southernmost part of the arc is moving north east, to be subducted under the Hellenic plate. The plate itself is extending southwest into the subduction zone, generating a fault-block topography.

The mountains of southern Europe that fringe the Mediterranean Sea and run generally in an east-west direction are of the folded type generated by collision of the northward-moving African Plate with the Eurasian Plate. Where the northern edge of the African Plate is being subducted in an irregular line a second orogeny occurs that is not entirely understood. The mountains of Italy and Greece are a combination of Folded Mountains and Fault-block mountains running in a northwest-southeast direction.

The Hellenic Subduction carries the leading edge of the African Plate under the Aegean Sea Plate at the Hellenic Trench. It follows an arc around the outer edge of the Peloponnese and Crete. The subduction on the west is to the northeast, on the east to the northwest, and north in the center. The average direction is N 21° E. In the islands and southern Greece a fault-block mountain orogeny prevails due to a double set of crustal movements. On the one hand the Aegean Sea Plate is being raised by the subduction. On the other hand, north-south extensional movements, yet unexplained, are pulling the plate apart, creating normal extensional faults and generating a parallel sequence of horsts and grabens, or rift valleys, running in a north-south direction.[3]

Mount Taygetus is a limestone horst bordering the Eurotas Rift Valley. Below its eastern face is the Sparta fault, a normal fault striking perpendicular to the direction of extension. Footwall scarps are visible on the eastern side of Taygetus at the base of its spurs. They result from sudden slippages of the hanging wall in the direction of the dip, causing earthquakes. Single earthquakes result in 1-12 m of scarp. The Sparta fault is zig-zag in strike, varying between N 170° E and N 140° E. The maximum slippage has been 10-12 m in three increments. The earthquake of 464 BC, which levelled Sparta, resulted from a slippage of 3-4 m over a length of 20 km of the fault. The slip rate has been about 1 mm per year suggesting an average interval between earthquakes of 3000 years.[4] 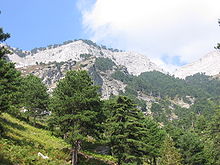 The slopes of Taygetus are heavily forested, primarily with Greek fir (Abies cephallonica) and black pine (Pinus nigra). Devastating fires in 2005 and 2007 consumed much of the forests on the central west slopes, and only about half remain.

The slopes of Taygetus have been inhabited since at least Mycenean times. The site of Arkina, near the village of Arna, contains three beehive tombs and is still unexplored. Taygetus was important as one of Sparta's natural defenses. The Spartans threw criminals and "unfit" (weak, sickly, deformed, or mentally retarded) infants into a chasm of Taygetus known as Ceadas (Κεάδας) or Caeadas (Greek: Καιάδας). In antiquity, male Spartan newborns were abandoned there if deemed unfit after examination for vitality. Recent evidence, found by the University of Athens, discovered remains of adult individuals which appeared to confirm that Ceadas was also, or mainly, a place of punishment for criminals, traitors and captives.[5] During the era of barbarian invasions, Taygetus served as a shelter for the native population. Many of the villages in its slopes date from this period. In Medieval times, the citadel and monastery of Mystras was built on the steep slopes, and became a center of Byzantine civilizations and served as capital of the Byzantine Empire. Mystras remains occupied by a tiny religious community. The buildings are remarkably well-preserved and a major tourist attraction in the region.

The peak known as Taleton, above Bryseae, was dedicated to Helios, the Sun, to whom horses were sacrificed.[6] As it is probably this peak that was later named "Profitis Ilias", it supports the hypothesis that the cult of the Prophet Elias replaced that of Helios on mountaintops; but Taleton was also dedicated to Zeus, a more common association.[7]

The mountain is a popular hiking destination and is part of the European walking route E4. The view from the top includes most of the Evrotas valley and the Parnon range to the east, while the view towards the west includes Kalamata and the eastern half of Messenia. Most of the southwestern part of Arcadia can also be seen from the summit.