Street running
This article is about railways in towns. For the physical activity, see Parkour. For the long distance sport, see road running. 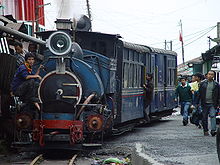 On-street running or street running is when a railroad track or tramway track runs directly along city streets, without any separation. The rails are embedded in the road.

A train shares the street directly with pedestrians and automobile traffic; trains travel at reduced speed for safety reasons. If there are stations on the section, they can appear similar in style to a tram stop. 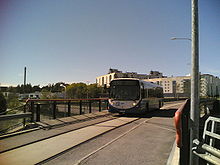 A bus sharing a railway bridge in Helsinki, Finland. The rail are for mainline trains accessing the Helsinki Metro depot (not for trams)

Notable examples in Canada include:[2]

In the north east of Germany, the steam "Mollibahn" narrow gauge railway travels on-street through the town of Bad Doberan at the start of its journey. 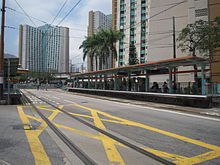 The MTR Light Rail running in and between the new towns of Tuen Mun, Yuen Long and Tin Shui Wai has many sections of on-street running,[3][4][5] although many parts of it run on their own tracks alongside major roads or elevated, e.g., at the several junctions near Tuen Mun Town Centre.[6][7]

One of the most famous locations is when the steam-powered Darjeeling Himalayan Railway "Toy train" squeezes between narrow shop fronts down past a bazaar in India.

Indonesia used to have an extensive "steam tramways" (more accurately defined as local railways) network, which had many street running sections in various towns and cities in Java and Sumatra.

Two sections remain in use in 2010: part of the Wonogiri branch runs along the Slamet Riyadi street in Surakarta, and a short branch to an oil depot in Madiun. The earlier line sees both passenger and freight service (including a steam-hauled tourist train), while the other line is exclusively for freight.[citation needed]

Trains between Rosslare Europort and Dublin Connolly run on streets for a short distance through the town of Wexford.[citation needed]

The Bernina Railway runs in the streets of Tirano.[8]

The Circumetnea ran until 1999 on the Corso delle Provincie in Catania.[9]

The Cremona–Iseo railway ran until 1956 in the central street of Cavatigozzi.[citation needed]

The Domodossola–Locarno railway started until the 80s from the station square of Domodossola.[10]

The Rivabahn was until 1981 a freight railway that ran into the city of Trieste along the seaside street ("Riva").[11]

The Rome–Fiuggi railway (now practically a tramway) runs completely along the Via Casilina in Rome.[12] 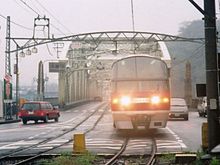 In Aguas Calientes, the town at the foot of Macchu Picchu, the railway shares the streets with pedestrians, as well as in other towns further up the line. This railway serves as the only viable way of reaching Macchu Picchu from Cusco without walking.[citation needed] 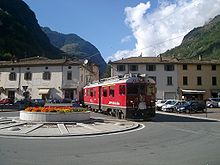 Swiss law does not distinguish between trams and railways, making the distinction between street running by trams and that by railways subjective.

The Berninabahn has two sections of street running, in Le Prese, and in Tirano (in Italy), where the approach to the station involves street running and crossing a public square.

In Chur there is on-street running between the city's main railway station and Chur Stadt and a little further into Sand.

The Pinghsi Line is running along the streets near several of its stations, e.g., Shihfen Station and Pinghsi Station.

The most notable track where Street Running was common was the Weymouth Harbour Tramway however this has been out of service to regular traffic since 1987, and to all traffic since 1999.

The Tramlink network runs along several miles of streets in Croydon town centre.

The Porthmadog cross town link links the narrow-gauge Welsh Highland and Ffestiniog railways and includes some street running through Porthmadog.[13]

There is a freight-only street running railway network in Trafford Park, however only one section along Barton Dock Road is still in regular use.

Notable examples in the United States include:[2]