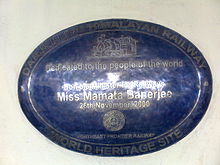 The Darjeeling Himalayan Railway, nicknamed the "Toy Train", is a 2 ft  (610 mm) narrow gauge railway from New Jalpaiguri to Darjeeling in West Bengal, run by the Indian Railways.

It was built between 1879 and 1881 and is about 86 kilometres (53 mi) long. The elevation level is from about 100 m (328 ft) at New Jalpaiguri to about 2,200 metres (7,218 ft) at Darjeeling. Four modern diesel locomotives handle most of the scheduled services: however the daily Kurseong-Darjeeling return service and the daily tourist trains from Darjeeling to Ghum (India's highest railway station) are handled by vintage British-built B Class steam locomotives.Since 1999 the train has been a World Heritage Site as listed by UNESCO. In 2005, UNESCO added the Nilgiri Mountain Railway as an extension to the original designation. In 2008 the 96 kilometres (60 mi), 2.5 feet (760 mm) gauge Kalka–Shimla Railway, opened in 1903, was also added.

A standard gauge railway connected Calcutta (now Kolkata) and Siliguri in 1878.[1] Siliguri, at the base of the Himalayas, was connected to Darjeeling by a cart road (the present day Hill Cart Road) on which "Tonga services" (carriage services) were available.[2] Franklin Prestage, an agent of Eastern Bengal Railway Company approached the government with a proposal of laying a steam tramway from Siliguri to Darjeeling.[2] The proposal was accepted in 1879 following the positive report of a committee formed by Sir Ashley Eden, the Lieutenant Governor of Bengal.[2] Construction started the same year.

Gillanders Arbuthnot & Co. constructed the railway. The stretch from Siliguri to Kurseong was opened on 23 August 1880, while the official opening of the line up to Darjeeling was on 4 July 1881.[1] Several engineering adjustments were made later in order to ease the gradient of the rails.[2][3] Despite natural calamities, such as an earthquake in 1897 and a major cyclone in 1899,[3] the DHR continued to improve with new extension lines being built in response to growing passenger and freight traffic.[3] However, the DHR started to face competition from bus services that started operating over the Hill Cart Road, offering a shorter journey time. During World War II, the DHR played a vital role transporting military personnel and supplies to the numerous camps around Ghum and Darjeeling.[3]

After the independence of India, the DHR was absorbed into Indian Railways and became a part of the Northeast Frontier Railway zone in 1958.[3] In 1962, the line was realigned at Siliguri and extended by nearly 4 miles (6 km) to New Jalpaiguri (NJP) to meet the new broad gauge line there. DHR remained closed for 18 months during the hostile period of Gorkhaland Movement in 1988–1989.[3] DHR was declared a World Heritage Site by UNESCO in 1999, only the second railway to have this honour bestowed upon it,[4] the first one being Semmering Railway of Austria in 1998. 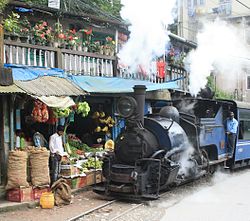 Typical roadside scenery. The train is literally rolling through a fruit shop. 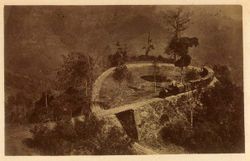 A tight loop (Agony Point) on the Darjeeling Himalayan Railway. 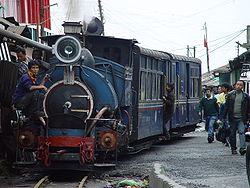 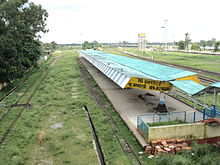 The railway line basically follows Hill Cart Road which is partially the same as National Highway 55. Usually, the track is simply on the road side. In case of landslides both track and road might be affected. As long parts of the road are surrounded with buildings, the railway line often rather resembles urban tramway tracks than an overland line. 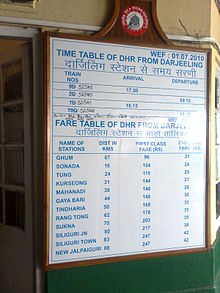 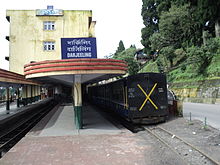 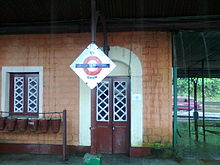 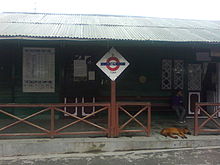 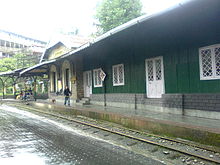 To warn residents and car drivers about the approaching train, engines are equipped with very loud horns that even drown horns of Indian trucks and buses. Trains horn almost without pause - therefore people with sensitive ears (especially foreigners from countries that are more quiet than India) should wear ear protection while riding the train.

Loop No.1 was in the woods above Sukna. It was removed after flood damage in 1991. The site is now lost in the forest.

A short distance above Rangtong there is a water tank. This was a better position for the tank than in the station, both in terms of water supply and distance between other water tanks.

When Loop 2 was removed in 1942, again following flood damage, a new reverse, No.1, was added, creating the longest reverse run.

Loop No.3 is at Chunbatti. This is now the lowest loop.

Immediately above the station are three sidings; these were used to inspect the carriage while the locomotive was changed, before the train continued towards Darjeeling.

Agony Point is the name given to loop No.4. It comes from the shape of the loop which comes to an apex which is the tightest curve on the line.

Reverse No.6 is the last reverse on the climb.

Above Kurseong station, the railway runs through the bazaar. Trains skirt the front of shops and market stalls on this busy stretch of road.

The farthest reach of the line was to Darjeeling Bazaar, a goods-only line and now lost under the road surface and small buildings. 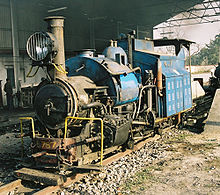 No.787 after conversion to oil firing. 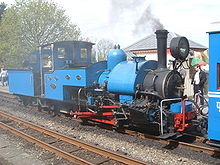 No.778 hauling a train on the Ffestiniog Railway.

In 2002 No.787 was rebuilt with oil firing. This was originally installed to work on the same principle as that used on Nilgiri Mountain Railway No.37395. A diesel-powered generator was fitted to operate the oil burner and an electrically-driven feed pump, and a diesel-powered compressor was fitted to power the braking system. Additionally the locomotive was fitted with a feedwater heater. The overall result was a dramatic change in the appearance of the locomotive.However, the trials of the locomotive were disappointing and it never entered regular service. In early 2011 it was in Tindharia Works awaiting reconversion to coal-firing.

In March 2001, No.794 was transferred to the Matheran Hill Railway to allow a "Joy Train"[5] (steam-hauled tourist train) to be operated on that railway. It did not, however, enter service there until May 2002.

Four diesel locomotives are in use Nos.601-2,604 & 605 of the NDM6 class transferred from the Matheran Hill Railway.

Only one DHR steam locomotive has been taken out of India, No.778 (originally No.19). After many years out of use in an American museum, it was sold to an enthusiast in the UK and restored to working order. It is now based on a private railway (The Beeches Light Railway) in Oxfordshire but has run on the Ffestiniog Railway, the Launceston Steam Railway and the Leighton Buzzard Light Railway.

The Darjeeling Himalayan Railway has long been viewed with affection and enthusiasm by travellers to the region, and the Earl of Ronaldshay gave the following description of a journey in the early 1920s:

"Siliguri is palpably a place of meeting ... The discovery that here the metre gauge system ends and the two foot gauge of the Darjeeling-Himalayan railway begins, confirms what all these things hint at ... One steps into a railway carriage which might easily be mistaken for a toy, and the whimsical idea seizes hold of one that one has accidentally stumbled into Lilliput. With a noisy fuss out of all proportion to its size the engine gives a jerk — and starts ... No special mechanical device such as a rack is employed — unless, indeed, one can so describe the squat and stolid hill-man who sits perched over the forward buffers of the engine and scatters sand on the rails when the wheels of the engine lose their grip of the metals and race, with the noise of a giant spring running down when the control has been removed. Sometimes we cross our own track after completing the circuit of a cone, at others we zigzag backwards and forwards; but always we climb at a steady gradient — so steady that if one embarks in a trolley at Ghum, the highest point on the line, the initial push supplies all the energy necessary to carry one to the bottom."[6] 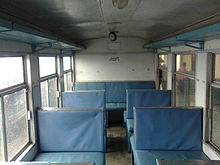 The trip up to Darjeeling on railway has changed little since that time, and continues to delight travellers and rail enthusiasts, so much so that it has its own preservation and support group, the Darjeeling Himalayan Railway Society.[7]

Several Bollywood movies have portrayed the railway. Especially popular was the song Mere sapno ki rani from the film Aradhana where the protagonist Rajesh Khanna tries to woo heroine Sharmila Tagore who was riding in the train.[8][9] Other notable films include Jhumroo, Parineeta and Raju Ban Gaya Gentleman. The Darjeeling Limited, a film directed by Wes Anderson, features a trip by three brothers on a fictional long-distance train based loosely on the Darjeeling Himalayan Railway.

The BBC made a series of three documentaries[10] dealing with Indian Hill Railways, with the NMR being featured in the second programme shown in February 2010. The first film covers the Darjeeling-Himalayan Railway, the second the Nilgiri Mountain Railway and the third the Kalka-Shimla Railway.) The films were directed by Tarun Bhartiya, Hugo Smith and Nick Mattingly, and produced by Gerry Troyna. The series won the UK Royal Television Society Award in June 2010.[11]

Other tourist trains in India