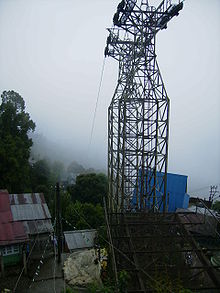 The ropeway, which was started in 1968 and revamped in 1988, was stopped in October 2003 after four tourists died when the cable snapped causing two cars to plummet down the hill. In 2005, the state forest and public works department (PWD) ministers formed a three-member committee to oversee safety issues. The committee, which included a PWD engineer and two Kalyani Government Engineering College teachers, found the services unfit after a trial run.[1] 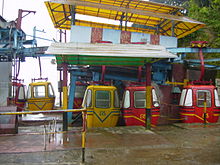 The ropeway was started in 1968 by the forest development department and comprised only a single car which ran one way. Later, it was upgraded to 16 cars and went to and fro.[2] From an elevation of 2,134 m (7,001 ft) in Darjeeling’s North Point (Singamari), this bicable ropeway descended to 244 m (801 ft) at Singla on the banks of the Ramman river, which with Little Rangeet, meets the Great Rangeet. Stopping at Tukver, Burnesbeg and Singla tea estates, it took 45 minutes to reach Singla Bazar, 8 km away. The ropeway passed over dense forests, mountain ridges, water falls, flowing rivers, green valleys and tea gardens.[3]

The passenger ropeway was operated as a joint venture of the West Bengal Forest Development Corporation and the Conveyor and Ropeway Services Private Ltd. It had been revamped in 1988.[5]

Four tourists were killed and 11 others injured when three carriages of the Darjeeling Rungeet Valley Ropeway slipped off the cables at Singamari on 19 October 2003. One carriage was empty. The carriages, with the passengers, crashed and rolled into the steep tea garden slopes nearly 100 ft below. Those killed and injured were from Kharagpur. They were Bratati Mondal (35), her husband, Biswajit Mondal (40), Bandana Maiti (40) and her daughter, Tanushree Maiti (7). Bratati was killed on the spot. Seven of the injured were admitted to North Bengal Medical College and Hospital and the rest to Darjeeling Sadar Hospital. The injured were Pradip Maiti (husband of Bandana Maiti), his daughter, Pallavi, Soma Paul (35), councillor of ward 29 of Kharagpur municipality, Asim Paul (7), Arpita Paul (1), Rima Mondal (13), Bidyut Pratihar (48), his two daughters Sayani (14) and Subhoshri (9), Manas Pratihar (32) and Ajit Paul (38).[6]

The incident occurred around 11:15 a.m. S Chowdhary, site manager, who was arrested later, said the cable slipped out of the rails at the fourth tower from the upper station causing the carriages to be knocked off. Of the three carriages that dropped to the ground, one was empty. There were nearly 50 passengers in the carriages. The ropeway was switched off only after the third carriage fell. For nearly three hours the other carriages remained suspended. Sanjay Chander, Superintendent of Police, Darjeeling, said the accident took place due to negligence.[6] Although Army help was sought for bringing down the cars, ropeway authorities were able to do it themselves.[7] The West Bengal Government ordered an inquiry into the accident.[8]

An inquiry, headed by then Jalpaiguri division commissioner Balbir Ram, had said that one of the reasons for the accident was a change in alignment of the ropeway following a shift in the mountains. However, engineers involved in ropeway construction disagreed and said that such a shift happens over a long period of time, unless an earthquake occurs.

According to PWD officials, the company that operated the ropeway had reinstated it. But before it started functioning, the forest department had asked the PWD to carry out an inspection and issue a certificate of fitness.[9] Devices like limit switches, rope-catches and guards would be electrically operated and any flaw in the system would automatically halt the entire service. Such a system mitigates accidents due to human error and safeguards against the possibility of another catastrophe.[10]

The standing committee for industry and commerce of West Bengal State Assembly has given the West Bengal Industrial Infrastructure Development Corporation the task of restoring the ropeway.[1]