The Bhutia (in Sikkim: Denzongpa; Tibetan: འབྲས་ལྗོངས་པ་, Wylie: 'Bras-ljongs-pa; "inhabitants of Denzong;" in Bhutan: Dukpa) are ethnic Tibetans who speak Sikkimese, a Tibetan dialect fairly mutually intelligible to standard Tibetan. In 2001, the Bhutia numbered around 70,300. Bhutia here refers to Sikkimese Tibetans; in contrast, the Bhotiya are a larger family of related Tibetan peoples in northern Nepal of which the Bhutia are one member group.

The language spoken by the Bhutias in Sikkim is Sikkimese, which is 85% intelligible with either Tibetan or Dzongkha, the language of Bhutan, although in recent times Nepali is more widely spoken. Most Bhutias practice the Nyingmapa school, followed by the Kagyupa school of Tibetan Buddhism. The Bhutias are spread out over Nepal, Bhutan, and in the northern West Bengal, especially in the towns of Kalimpong and Darjeeling.

The ancestors of the Bhutia migrated from Tibet to Sikkim, Darjeeling, Kalimpong other parts of modern-day India and Bhutan some time around 6th century. They migrated through the different passes ("La" in Tibetan means "hill") in the Himalayas. Geographical denotations in the name of Bhutias' last names is common. In Northern Sikkim for example, where the Bhutias are the majority inhabitants, they are known as the Lachenpas or Lachungpas, meaning inhabitants of Lachen (Tibetan: ལ་ཆེན་; "big hill") or Lachung (Tibetan: ལ་ཆུང་; "small hill") respectively.

Bhutia aristocrats were called Kazis after similar land lord titles in neighboring regions, especially in modern day Bangladesh. This feudal system was an integral part of Chogyal monarchy prior to 1975, when Sikkim was an independent monarchy; the ruling dynasty of the Kingdom of Sikkim before the mid-1970s plebiscite was the Bhutia Namgyal dynasty. Among the Bhutias, the Lachenpas and Lachungpas have their own traditional legal system called the “Dzumsa” which means the meeting place of the people The Dzumsa is headed by the village headman known as the Piponof North Sikkim have been given full protection by the state government by deeming a status of Panchayat ward and the Pipon, a status of Panchayat head.

The traditional outfit of Bhutias is called a bakhu (similar to the Tibetan chuba, but sleeveless) which is a loose cloak type garment that is fastened at the neck on one side and near the waist with a silk/cotton belt. Male members array the bakhu with a loose trouser. The womenfolk don the bakhu with a silken full sleeve blouse called honju; a loose gown type garment fastened near the waist, tight with a belt. In the front portion a loose sheet of multi-coloured woollen cloth with exotic geometric designs is tied. This is called the pangden and is a symbol of a married woman. This traditional outfit is complemented by embroidered leather boots by both men and women. Bhutia women enjoy a much higher status than their counterparts from other communities. Both women and men have a special weakness for gold in its purest form and, traditional jewellery is mostly made of 24 carats (100%) gold.

In Sikkim, the Bhutias are mostly employed in the Government Sector, in agriculture, and increasingly in the business arena as well. In the district of Darjeeling, Bhutias are often employed in government and commerce. Bhutias practise intermarriage within their clans and follow a very hierarchical system of bride and groom selection. Clan discrimination is widespread and marriage outside the community is looked down upon.

A traditional Bhutia house is called a "khim" and is usually rectangular.

The Bhutias have a stone structure outside the house which is used for burning incense. It is called "sangbum." "Sang" means incense and "bum" means vase; the shape of the structure is like a vase. It is used for burning sang, a sacred offering to the deities. The deities are offered scented dried leaves/stalks of rhododendron anthopogon, juniperus recurva, rhododendron setosum or incense sticks made of pine. 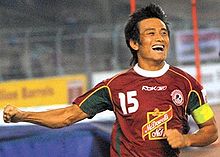 Bhutias traditionally eat rice with animal fat fried vegetables or meat usually pork, and beef, and occasionally mutton or chicken. Other well known foods are momo- steamed meat dumplings, and the Thukpa- noodle in broth. The Losar and Loosong are two among many festivals celebrated by the Bhutia community. Almost all Bhutia festivals/holidays hold religious Buddhist significance.

Chyang is the favourite drink of the Bhutias, and increasingly of other communities coexisting with the Bhutias as well. It is made of fermented barley or millets, and is served in a bamboo container called the Tongba. Tea with milk and sugar, and butter tea is also served in religious or social occasions.