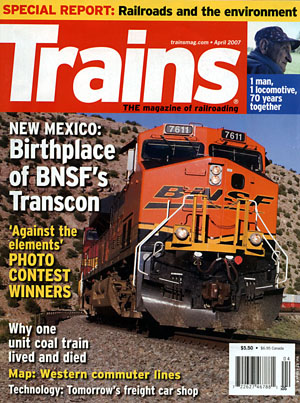 "Trains" is a monthly magazine dedicated to s and railroads, and is one of the two flagship publications of . The magazine is read both by railroad enthusiasts, commonly referred to as s, and those within the railroad industry.

The magazine was founded in 1940 by , and is based in . With a circulation of 93,218, it is the largest and oldest North American consumer magazine on rail transportation. Primarily, "Trains" covers the railroad happenings in the and , and sometimes . However, there are articles on subjects on railroading around the world on occasion.

The editor as of October is , formerly of the "." The magazine also includes a column from "" reporter , previously the transportation writer for the "".