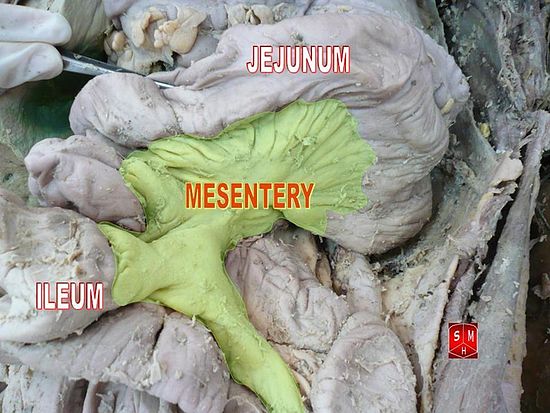 The mesentery proper (i.e. the original definition) refers to the peritoneum responsible for connecting the jejunum and ileum (parts of the small intestine) to the back wall of the abdomen. Between the two sheets of peritoneum are blood vessels, lymph vessels, and nerves. This allows these parts of the small intestine to move relatively freely within the abdominopelvic cavity. The brain, however, cannot map sensation accurately, so sensation is usually referred to the midline, an example of referred pain.

The root of proper mesentery extends 15 cm from duodenojejunal flexure at the level of left side of L2 obliquely (toward inferior right) to the ileocecal junction in the right iliac fossa at the level of right sacroiliac joint. The root of mesentery crosses the second and third parts of duodenum, abdominal aorta, Inferior vena cava, right ureter, right psoas major muscle, and right gonadal artery.

Mesenteries in the body:

A lack of blood-supply to the mesentery causes mesenteric ischemia.

In invertebrates, the term mesentery is used for any tissue that divides the body cavity (coelom) into partitions.

Among cooks, the mesentery is known as the crow.[1] In classical French cuisine, veal crow (French: fraise de veau) is typically blanched then cooked in stock, and sometimes subsequently fried.[2]