In vector calculus, the curl (or rotor) is a vector operator that describes the infinitesimal rotation of a 3-dimensional vector field. At every point in the field, the curl is represented by a vector. The attributes of this vector (length and direction) characterize the rotation at that point.

The alternative terminology rotor or rotational and alternative notations rot F and ∇×F are often used (the former especially in many European countries, the latter, using the del operator and the cross product, is more used in other countries) for curl and curl F.

Unlike the gradient and divergence, curl does not generalize as simply to other dimensions; some generalizations are possible, but only in three dimensions is the geometrically defined curl of a vector field again a vector field. This is a similar phenomenon as in the 3 dimensional cross product, and the connection is reflected in the notation ∇× for the curl.

The name "curl" was first suggested by James Clerk Maxwell in 1871.[1]

For the equation in Cartesian coordinates, see Curl (mathematics)#Usage.

The curl of a vector field F, denoted curl F or ∇×F, at a point is defined in terms of its projection onto various lines through the point. If

is any unit vector, the projection of the curl of F onto

as the path used in the integral becomes infinitesimally close to the point, divided by the area enclosed.

Convention for vector orientation of the line integral

Implicitly, curl is defined by:[2]

is a line integral along the boundary of the area in question, and |A| is the magnitude of the area. If

is an outward pointing in-plane normal, whereas

is the unit-vector perpendicular to the plane (see caption at right), then the orientation of C is chosen so that a vector

tangent to C is positively oriented if and only if

The above formula means that the curl of a vector field is defined as the infinitesimal area density of the circulation of that field. To this definition fit naturally (i) the Kelvin-Stokes theorem, as a global formula corresponding to the definition, and (ii) the following "easy to memorize" definition of the curl in orthogonal curvilinear coordinates, e.g. in cartesian coordinates, spherical, or cylindrical, or even elliptical or parabolical coordinates:

is the length of the coordinate vector corresponding to

Suppose the vector field describes the velocity field of a fluid flow (maybe a large tank of water or gas) and a small ball is located within the fluid or gas (the centre of the ball being fixed at a certain point). If the ball has a rough surface, the fluid flowing past it will make it rotate. The rotation axis (oriented according to the right hand rule) points in the direction of the curl of the field at the centre of the ball, and the angular speed of the rotation is half the value of the curl at this point.[3]

In practice, the above definition is rarely used because in virtually all cases, the curl operator can be applied using some set of curvilinear coordinates, for which simpler representations have been derived.

The notation ∇×F has its origins in the similarities to the 3 dimensional cross product, and it is useful as a mnemonic in Cartesian coordinates if we take ∇ as a vector differential operator del. Such notation involving operators is common in physics and algebra. If certain coordinate systems are used, for instance, polar-toroidal coordinates (common in plasma physics) using the notation ∇×F will yield an incorrect result.

where i, j, and k are the unit vectors for the x-, y-, and z-axes, respectively. This expands as follows:[4]

Although expressed in terms of coordinates, the result is invariant under proper rotations of the coordinate axes but the result inverts under reflection.

In a general coordinate system, the curl is given by[2]

where ε denotes the Levi-Civita symbol, the metric tensor is used to lower the index on F, and the Einstein summation convention implies that repeated indices are summed over. Equivalently,

where ek are the coordinate vector fields. Equivalently, using the exterior derivative, the curl can be expressed as:

are the musical isomorphisms, and

is the Hodge dual. This formula shows how to calculate the curl of F in any coordinate system, and how to extend the curl to any oriented three dimensional Riemannian manifold. Since this depends on a choice of orientation, curl is a chiral operation. In other words, if the orientation is reversed, then the direction of the curl is also reversed.

Take the vector field, which depends on x and y linearly: 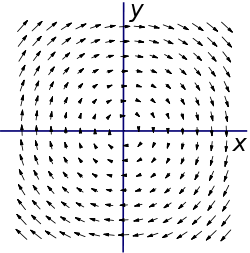 Simply by visual inspection, we can see that the field is rotating. If we place a paddle wheel anywhere, we see immediately its tendency to rotate clockwise. Using the right-hand rule, we expect the curl to be into the page. If we are to keep a right-handed coordinate system, into the page will be in the negative z direction. The lack of x and y directions is analogous to the cross product operation.

If we calculate the curl:

Which is indeed in the negative z direction, as expected. In this case, the curl is actually a constant, irrespective of position. The "amount" of rotation in the above vector field is the same at any point (x, y). Plotting the curl of F is not very interesting: 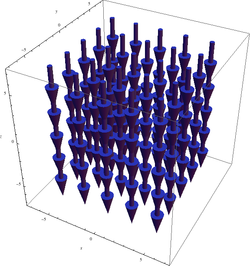 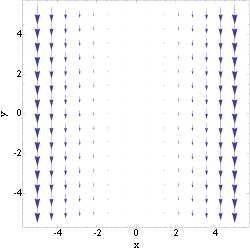 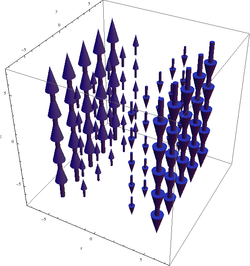 Consider the example ∇ × [ v × F ]. Using Cartesian coordinates, it can be shown that

In the case where the vector field v and ∇ are interchanged:

which introduces the Feynman subscript notation ∇F, which means the subscripted gradient operates only on the factor F.

Another example is ∇ × [ ∇ × F ]. Using Cartesian coordinates, it can be shown that:

which can be construed as a special case of the previous example with the substitution v → ∇.

represents, in the case, the vector formed by the individual laplacian of each component of the vector in question)

The curl of the gradient of any scalar field

is always the zero vector:

If φ is a scalar valued function and F is a vector field, then

The vector calculus operations of grad, curl, and div are most easily generalized and understood in the context of differential forms, which involves a number of steps. In a nutshell, they correspond to the derivatives of 0-forms, 1-forms, and 2-forms, respectively. The geometric interpretation of curl as rotation corresponds to identifying bivectors (2-vectors) in 3 dimensions with the special orthogonal Lie algebra so3 of infinitesimal rotations (in coordinates, skew-symmetric 3×3 matrices), while representing rotations by vectors corresponds to identifying 1-vectors (equivalently, 2-vectors) and so3, these all being 3-dimensional spaces.

a differential 2-form is a linear combination of three functions

and a differential 3-form is defined by a single function:

The exterior derivative of a k-form is a (k + 1)-form, and denoting the space of k-forms by

and the exterior derivative by d yields a sequence:

is the space of sections of the exterior algebra

vector bundle over Rn, whose dimension is the binomial coefficient

for k > 3 or k < 0. Writing only dimensions, one obtains a row of Pascal's triangle:

this is given by:

Grad and div generalize to all oriented pseudo-Riemannian manifolds, with the same geometric interpretation, because the spaces of 0-forms and n-forms is always (fiberwise) 1-dimensional and can be identified with scalar functions, while the spaces of 1-forms and (n − 1)-forms are always fiberwise n-dimensional and can be identified with vector fields.

), as taking the differential twice yields zero (d2 = 0). Thus there is no curl function from vector fields to vector fields in other dimensions arising in this way.

However, one can define a curl of a vector field as a 2-vector field in general, as described below.

2-vectors correspond to the exterior power Λ2V; in the presence of an inner product, in coordinates these are the skew-symmetric matrices, which are geometrically considered as the special orthogonal Lie algebra so(V) of infinitesimal rotations. This has

dimensions, and allows one to interpret the differential of a 1-vector field as its infinitesimal rotations. Only in 3 dimensions (or trivially in 0 dimensions) is

Considering curl as a 2-vector field (an antisymmetric 2-tensor) has been used to generalize vector calculus and associated physics to higher dimensions.[5]