University of Manchester Institute of Science and Technology

University of Manchester Institute of Science and Technology 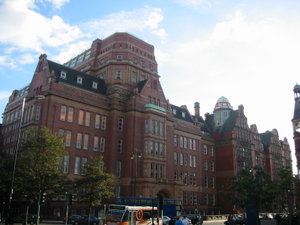 UMIST gained its Royal Charter in 1956 and became a fully autonomous university in 1993. Previously its degrees were awarded by the Victoria University of Manchester. The UMIST motto was Scientia et Labore (By Knowledge and Work). 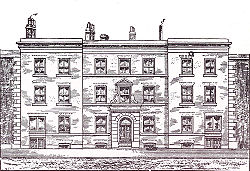 The foundation of UMIST can be traced to 1824 during the Industrial Revolution when a group of Manchester businessmen and industrialists met in a public house, the Bridgewater Arms, to establish the Mechanics' Institute in Manchester, where artisans could learn basic science, particularly mechanics and chemistry.[1] Hundreds of such institutions were founded in towns and cities throughout the country and while many of the fine Victorian buildings built to house them remain, Manchester's alone survived as an independent institution serving some of its original educational aims throughout the 20th century.[2]

The meeting, convened by George William Wood on 7 April 1824,[1][2][3] was attended by prominent members of the science and engineering community, including:

A committee was elected to realise the planned institution, including Wood, Fairbairn, Heywood, Roberts and John Davies and the Institute opened in 1825 with Heywood as chairman.[1]

However, the Institute's intentions were paternal and no democratic control by its students was intended. In 1829, radical Rowland Detrosier led a breakaway group to form the New Mechanics' Institution in Poole Street, a move that had a serious effect on the recruitment and finances of the original institute. Subscriptions and memberships in 1830-31 were an all-time low and only the gradual opening of the board up to election by the members rectified the situation. Detrosier's break-away ultimately rejoined the Institute.[1]

By 1840, the Institute was established with 1,000 subscribers and a library of some 5,500 books. However, the increased popularity had been somewhat at the cost of science education, more and more lectures on non-scientific subjects were occupying its programmes.[1]

The Institute occupied a building on Cooper Street (near the present St Peter's Square) and later moved to a grander home in David Street (later renamed Princess Street). This still stands and is listed Grade II.

In 1883 secretary of the Institution John Henry Reynolds reorganised the Institution as a Technical School using the schemes and examinations of the City and Guilds of London Institute. A new building was begun in 1895 and opened by the Prime Minister Arthur Balfour in October 1902.[5] On the site previously had been cheap crowded inner-city housing occupied by Irish immigrants.[6]

This is the western end of what was until recently known as the UMIST Main Building, pictured above, a grade II listed building by Spalding and Cross with Renaissance motifs of Burmantofts terracotta.[7] By this time the institution was called the Manchester Municipal School of Technology or fondly known as The Tech.[8] As a project of the Manchester City Council it includes in the decoration many portrayals of the city's coat of arms.

As befits its roots in the early chemical industry of the region the Tech had pioneered Chemical Engineering as an academic subject in Britain, indeed the lectures by George E. Davis in 1888 were highly influential in defining the discipline. Similarly in the 1920s it pioneered academic training in Management, with the formation of a Department of Industrial Administration funded by an endowment from asbestos magnate Sir Samuel Turner.[9] But perhaps a more significant advance was the foundation in 1905 of a Faculty of Technology, answerable academically to its 'younger sister' the Victoria University of Manchester and awarding BSc and MSc degrees, the beginnings of UMIST as a University and the first technology faculty in the country.[citation needed]

After the recent merger with Victoria University of Manchester the UMIST Main Building was renamed as the "Sackville St. Building".

In 1918, the institution changed name again to Manchester Municipal College of Technology. By 1949 over 8500 students were enrolled, however most still studying non-degree courses. The appointment of B. V. Bowden (later Lord Bowden) in 1953 marked the beginning of a phase of expansion. During 1955 and 1956 the Manchester College of Science and Technology achieved independent university status under its own Royal Charter and became separately funded from the University Grants Committee.

The UMIST emblem as used in the late 20th century (based on the arms of the Institute, derived from the coat of arms of the lords of the manor of Manchester)

In the late 20th century, student life at UMIST centred on the Barnes Wallis Building, which was the home of the Students' Union (later known as the Students' Association) and Harry's Bar.

A prominent feature of the student calendar from the 1960s onwards was the Bogle Stroll. This was a 55-mile long sponsored walk for charity which was held annually during Rag Week. Each year, hundreds of students followed the circular route which started and finished at the UMIST campus. The tradition continues in The University of Manchester [1]

During the last quarter of the 20th century UMIST established a reputation as a major research-based university, performing well in the government's Research Assessment Exercise in 2001, and was well placed in various league tables. UMIST has won four Queen's Prizes for Higher and Further Education, two Prince of Wales' Awards for Innovation and two Queen's Award for Export Achievement.

UMIST was instrumental in the founding of what is now the Museum of Science and Industry in Manchester. Famous alumni include Nobel Laureate in nuclear physics Sir John Cockcroft, aeroplane pioneer Sir Arthur Whitten Brown, and designer of the Lancaster bomber Roy Chadwick, while famous academics include mathematicians Louis Joel Mordell, Hanna Neumann, Lewis Fry Richardson and Robin Bullough, and the physicist Henry Lipson.

Other notable alumni include Margaret Beckett, a politician who in 2006 became Foreign Secretary.

In 2004 Terry Leahy, CEO of Tesco and alumnus was the last Chancellor of UMIST, and the Vice Chancellor was fittingly a chemical engineer, Prof John Garside.

The merged university undertook a massive expansion and a £350 million capital investment programme in new buildings. Some, such as the Alan Turing Building, house merged departments such as the School of Mathematics. The estates plan, published in 2007, indicates an intention to sell a number of former UMIST teaching buildings, including the Moffat Building, the Maths and Social Sciences Tower, the Morton Building and the Fairbairn Building, as well as formerly UMIST-owned halls of residence including Hardy Farm, Chandos Hall, Wright-Robinson Hall and Weston Hall.[11] The original UMIST Main Building is not included in this list. Covenants restrict it to educational use. No plans have been announced for the sale of any former Victoria University of Manchester buildings. Unions and some ex-UMIST staff and students have reacted angrily to the potential sales.[12]

In the estates strategy for 2010-2020 for the University of Manchester [2] it is stated that essentially all of the former UMIST campus, described as the "area north of the Mancunian Way," is to be disposed of. Only the MIB, which was built in 2006, is exempted, whilst the fate of the former UMIST Main Building is left vague. The Faraday Building will be replaced by student accommodation and it is envisaged that the Engineering Schools will eventually be relocated to new buildings on the site of the present halls of residence in the Grosvenor Place area.

In March 2007, the press claimed that the merger had created a debt of £30 million, about 5% of the University's annual turnover, and that the University was aiming to tackle this debt by implementing 400 voluntary redundancies.[13][14] The University and College Union accused the University of mismanagement and called for a halt to recruitment.[15] Critics use these statistics to support the original claim that originally it was not a merger of equals, that it was a takeover of UMIST by Manchester University and that this was not in UMIST's best interests.[16]

Until the late 1980s, UMIST's official alumni organisation was called the Manchester Technology Association, a name which was a relic of UMIST's past incarnation as 'The Tech'. The organisation's name was then updated to become the UMIST Association. It published a glossy magazine for UMIST graduates called Mainstream.

In 2004, at the time of the university merger, the UMIST Association also merged with its equivalent organisation at the Victoria University of Manchester. This step was taken after minimal consultation with its membership. From that point on, there was no official association specifically for past UMIST students or staff. However, the growth of social networking websites has allowed the development of a number of unofficial UMIST alumni groups in cyberspace, particularly on Facebook.[17][18][19] The largest of these groups has more than 2,000 members. The UMIST Alumni group on LinkedIn also has over 2,000 members and has a sub-group for each of UMIST's academic departments. 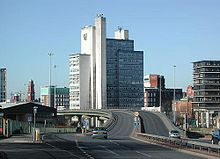 UMIST moved to its present location just south of Manchester city centre at the end of the 19th century. The Main Building [7] (now called the Sackville Street Building) was purpose-built between 1895 and 1902 by Spalding and Cross. Starting in 1927, plans were drawn up by the architects Bradshaw Gass & Hope for an extension which would approximately double the size of the original building. However, construction was delayed by the war and other factors, so that the extension was not fully completed until 1957.

In the 1960s the institution expanded rapidly to the south, growing from a single large building to an entire campus. Around a dozen modern buildings were constructed on the other side of the railway viaduct from the Main Building. The new edifices were designed by leading Manchester architects and were all built out of concrete. They included the Maths and Social Sciences Tower, the Faraday Building, the Renold Building, and the Barnes Wallis Building, the last two of which faced each other across a bowling green, which later became a landscaped garden.