Under a board of governors as body corporate, the university was organised into four faculties each led by a dean and comprising a number of schools:— 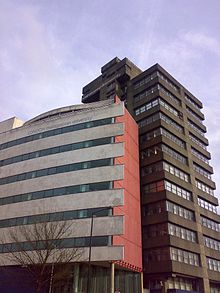 Faculty of Environmental and Social Studies

Faculty of Humanities and Teacher Education

Faculty of Science, Computing and Engineering

The Learning Centre library opened in 1994 and, in 1996, the Trades Union Congress library collections, established in 1922, transferred to the university.[1]

Following the merger with London Guildhall (formerly the City of London Polytechnic), London Metropolitan is the largest unitary university in London.

Coat of arms of the former Northern Polytechnic Institute.

The Northern Polytechnic opened in Holloway with aid from the City Parochial Foundation and substantial donations from the Worshipful Company of Clothworkers in 1896. Under the terms of its Royal Charter, its objective was "to promote the industrial skill, general knowledge, health and well-being of young men and women belonging to the poorer classes of Islington [and] to provide for the inhabitants of Islington and the neighbouring parts of north London, and especially for the Industrial Classes, the means of acquiring a sound General, Scientific, Technical and Commercial Education at small cost."[4] By 1911, five-year University of London evening degrees were available and, from 1925, courses were recognised by the Royal Institute of British Architects.

The North Western Polytechnic was eventually opened by HRH The Prince of Wales (later King Edward VIII) at Prince of Wales Road, Kentish Town in 1929. The Polytechnic later acquired premises at St. Pancras, Highbury (Ladbroke House) and Nos. 207–225 Essex Road. Concentrating on social sciences, humanities and arts, by 1967, when the printing department transferred to the London College of Printing (a founding member of the London Institute),[5] the North Western was the largest polytechnic in London.

The Polytechnic of North London was founded by the 1971 merger of the Northern and North Western polytechnics. Its first Director was Terence Miller, former principal of the University of Rhodesia.[6] Until the passing of the Education Reform Act 1988, it came under the control of the Inner London Education Authority, part of the then Greater London Council. Degree awarding authority resided with the former Council for National Academic Awards until the polytechnic, a pioneer of widening participation and access to higher education, was granted university status under the Further and Higher Education Act 1992.

After leaving Oxford in 1964, the renowned historian A. J. P. Taylor lectured at the Polytechnic until his death in 1990.[7]

In 1984, Patrick Harrington, a prominent member of the National Front and deputy editor of NF News, was the subject of protests by students who picketed and boycotted his lectures, arguing that his presence made life intolerable for ethnic minority students.[8] Disputing this, Harrington obtained an injunction which the protesters, backed by the students' union, ignored.[9] At one stage the President of the National Union of Students, Phil Woolas, reported that the Polytechnic was "simply not functioning any more," with lecturers defying the courts by refusing to give names of students on demonstrations.[10] Two student leaders were sent to prison for 16 days for contempt of the court order preventing them from barring Harrington and the Secretary of State for Education, Sir Keith Joseph, threatened to close the Polytechnic down.[11]

In December, David MacDowall, then Director, resigned after pressure from the Inner London Education Authority to make a complaint against Harrington for remarks he made in a radio interview. ILEA said the remarks were racist, which Harrington denied.[12] In his resignation letter, Dr. MacDowall admitted that he had acted "in a totally fascistic manner" over the issue and wished "all the picketing students the best of luck with their campaign."[13] Harrington subsequently faced a disciplinary hearing for a television interview in which, in line with NF policy, he questioned the right of black people to citizenship.[14] In January 1985, with a new Director, John Beishon, in post and final examinations approaching, the Polytechnic, students' union and Harrington agreed a deal in which his classes would be taught separately in another building.[15] He eventually graduated with a degree in philosophy.[16] Dr. Beishon remained at the Polytechnic for three years.[17]