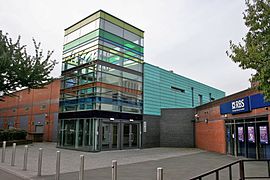 'Manchester Academy' was originally the name of the largest of these venues (see picture), but became an umbrella term for both itself and the union's other venues in the early 2000's.

The main venue Manchester Academy (sometimes referred to as Academy 1) is just south of the Students' Union. It opened in October 1990 and was first performed in by the Buzzcocks. It was closed completely between March and October 2007 when a major refurbishment and rebuilding programme began, completed in early 2008.[1] It had had a capacity of 1500 and hosted about 50 gigs a year prior to closure, the capacity having been increased to around 2300 since expansion.

Academy 2 is on the second floor of the Students' Union in the union's Main Debating Hall, which lead to the venue originally being advertised as the 'MDH', though the 'Academy 2' is now used instead. On May 15th 2010 Academy 2 hosted The Clone Roses & Joy Diversion, tribute acts of two of Manchesters most beloved bands.

Academy 3 is on the third floor of the Students' Union. It was formerly known as the 'Hop and Grape' and originally as the 'Solem Bar.'

Club Academy is in the basement of the Students' Union. It was refurbished in September 2005, before which it operated under the title of 'Cellar Disco', and generally hosted student-only events.

Prior to the construction of what is now their largest venue (and hence the name Manchester Academy) in 1990, the students' union has hosted a wealth of artists including The Yardbirds, The Who, Nazareth, The Moody Blues, Stevie Wonder, The Jimi Hendrix Experience, Cream, Captain Beefheart, Pink Floyd, Slade, Fairport Convention, Joe Cocker, Hawkwind, Procol Harum, The Wailers, AC/DC, Dire Straits, Cheap Trick, Status Quo, Francis Rossi & The Cure over the last fifty years.[2]

Shows usually start at 7:30pm Monday through Saturday and 7:00pm on Sundays, usually ending at 11 o'clock.

Following the re-opening of Academy 1 in October 2007, University of Manchester Students' Union came under much criticism for large parts of the refurbishment being incomplete. Customers originally had to use portable toilet facilities outside, suffered long queues for the one small bar and had no access to a cloakroom. These problems were eventually rectified with the opening of the completely rebuilt foyer, which included a sizeable bar and VIP balcony and lounge (also open to customers with disabilities).

Manchester Academy has also attracted positive publicity after being referred to as the UK's "greenest venue" with a third of the 3.5 million refurbishment budget going towards minimising the environmental impact and improving the sustainability of the reconstructed venue, as well as making substantial accommodation for disabled music fans.[3] It also received the title of "Best Entertainment Venue" in the 2007 MCR Awards.[4]