The One O’Clock Lab Band for 64 years has been the premier ensemble of the Jazz Studies Division at the University of North Texas College of Music in Denton. The band has performed and toured abroad in Australia, Canada, England, Finland, France, Germany, Hong Kong, Italy, Japan, Mexico, Norway, Poland, Portugal, Russia, Switzerland, Thailand, and The Netherlands. Since the 1970s, the band’s albums have received six Grammy nominations, including two for Lab 2009. Since 2008, the One O’Clock has been performing under the direction of Steve Wiest (born 1957), a two-time Grammy-nominated composer-arranger and Associate Professor of Music.[1] The One O’Clock is the highest of nine peer lab bands at the college, each named for its hour of rehearsal and each a standard 19-piece big band instrumentation — five saxophones, five trombones, five trumpets, piano, guitar, bass, and drums.[2] The One O’Clock evolved from an extracurricular stage band in 1927 into a curricular laboratory dance band in 1947 when North Texas launched the first jazz degree program in the world. Until 1967 it was the only jazz degree offered by a US university.[3]

The "Lab Band" portion of the name is drawn from the its original long name – "Laboratory Dance Band." Gene Hall, the founding director, coined the phrase in 1946. "Laboratory" signified the school's practical curricular application of artistic disciplines in various music settings such as ensembles, small chamber groups, bands, orchestras, choirs, keyboard ensembles, and guitar ensembles. "Dance" was dropped in the early 1960s, to reflect the wider developing aspects of big band music. The academic degree name, "Dance Band," however, stood until 1978, when it was renamed "Jazz Education" and renamed again in 1981 as "Jazz Studies."

Leon Breeden (1921–2010) presided when "The One O'Clock" was added as part of the official name in the early 1960s. North Texas has several lab bands, each bearing the name of their respective rehearsal times.

When Leon Breeden took over the Lab Band Program in 1959, there were four lab bands, then referred to as "Units:" One O'Clock, Two O'Clock, Three O'Clock, and Five O'Clock. At that time, the Two O'Clock was the premier band,[4] known as Laboratory Dance Band A.

The Stage Band (1927-mid 1930s) served as a proving ground for Ann Sheridan, Joan Blondell, and Louise Tobin. Actress Nancy Jane Gates first performed with the Stage Band in 1929, when she was three, and continued singing through graduation from Denton High School.[5] The Moonbeams, a quartet of four female vocalists, got their start with the Saturday night stage show in 1946. Two years later, they were touring with the Vaughn Monroe Band as the Moonmaids.[6]

The Aces, under the directorship of Floyd Graham, evolved out of the Saturday Night Stage Shows, which were presented weekly from 1927 to 1961. Annually, from 1962 to 1970, the Aces, together with other acts, traveled and performed for civic organizations, veterans’ hospitals, WFAA radio, and Texas military bases. The Aces of Collegeland was never offered for academic credit.[citation needed]

Willis Conover (1920–1996), jazz host on Voice of America, broadcast six nights a week to an audience that, at the peak of the Cold War, was estimated to be 30 million regular listeners in Eastern Europe and the former Soviet Union — and as many as 100 million worldwide.[9] Conover, who had heard the One O'Clock Lab Band several times, including as judge at the 1960 Notre Dame Jazz Festival (when Leonard Bernstein was on the festival's board), asked Leon Breeden, in 1967, for recordings of certain numbers. Later that year, Conover featured the One O'Clock Lab Band in an hour broadcast to an estimated audience of 40 million.[10] Every year thereafter, the One O’Clock supplied a professional quality studio engineered album to Conover.

Jazz was, as Mr. Conover liked to say, "the music of freedom;" and to those who had no freedom, it became a metaphor of hope. Conover was known as the most famous American virtually no American had ever heard of. By law, the Voice of America broadcasts — broadcasts that made him a household name in Europe, Asia and Latin America — could not be beamed to the United States, where Mr. Conover was known mainly to dedicated jazz fans. 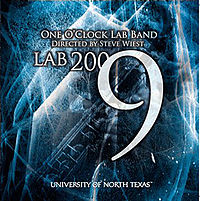 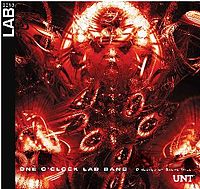 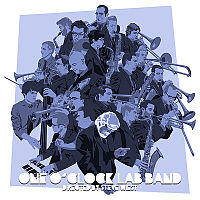 The first 5 tracks are of Gene Hall's last concert as director of the Laboratory Dance Band program at North Texas State College, Apr. 17, 1959; the other tracks were recorded in the early 1960s. This was the first Lab Band recording in both HiFi and Stereo.[14]

The One O'Clock has performed at music festivals around the world including Australia, Canada, Finland, France, Germany, Hong Kong, Italy, Japan, Mexico, Norway, Poland, Portugal, Russia, Switzerland, Thailand and the Netherlands. The One also performed often at the annual IAJE conference.

Under the direction of Gene Hall

Under the direction of Leon Breeden

Under the direction of Neil Slater

Under the direction of Steve Wiest

Student & faculty composers/arrangers for the One O'Clock (non-members)