This article is about the Masnavi-i Ma'navi of Rumi; for the masnavi poetic form, see Masnavi (poetic form).

The Masnavi, Masnavi-I Ma'navi (Persian: مثنوی معنوی) or Mesnevi (Turkish), also written Mathnawi, Ma'navi, or Mathnavi, is an extensive poem written in Persian by Jalal al-Din Muhammad Rumi, the celebrated Persian Sufi saint and poet. It is one of the best known and most influential works of both Sufism and Persian literature. The Masnavi is a series of six books of poetry that each amount to about 25,000 verses or 50,000 lines.[1][2] It is a spiritual writing that teaches Sufis how to reach their goal of being in true love with God.[3] 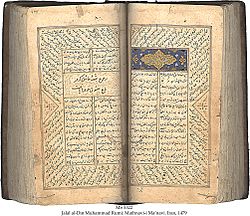 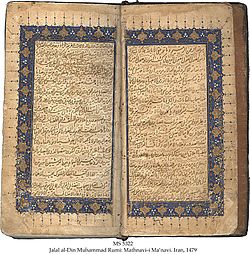 A manuscript of the Masnavi from the city of Shiraz.

The title Masnavi-I Ma'navi means "Rhyming Couplets of Profound Spiritual Meaning." The Masnavi is a poetic collection of rambling anecdotes and stories derived from the Quran, hadith sources, and everyday tales. Stories are told to illustrate a point and each moral is discussed in detail. It incorporates a variety of Islamic wisdom but primarily focuses on emphasizing inward personal Sufi interpretation. This work by Rumi is referred to as a “sober” Sufi text. It reasonably presents the various dimensions of Sufi spiritual life and advises disciples on their spiritual paths. “More generally, it is aimed at anyone who has time to sit down and ponder the meaning of life and existence.”[4]

Creation of the Masnavi

The Masnavi was a Sufi masterpiece started during the final years of Rumi’s life. He began dictating the first book around the age of 54 around the year 1258 and continued composing verses until his death in 1273. The sixth and final book would remain incomplete.[5]

It is documented that Rumi began dictating the verses of the Masnavi at the request of his treasured disciple, Husam al-Din Chalabi, who observed that many of Rumi’s followers dutifully read the works of Sana’i and ‘Attar. Thus, Rumi began creating a work in the didactic style of Sana’i and ‘Attar to complement his other poetry. These men met regularly in meetings where Rumi would deliver the verses and Chalabi would record it and recite back to him. During the final years of Rumi’s life, the Masnavi was being created.[6]

Each book consists of about 4,000 verses and contains its own prose introduction and prologue. Considering there are no epilogues, one must read the proceeding volumes to fully benefit from the wisdom presented by Rumi. Some scholars suggest that in addition to the incomplete work of Book 6, there might be a seventh volume.[7]

Themes in the Masnavi

The six books of the Masnavi can be divided into three groups of two because each pair is linked by a common theme[8]:

In addition to the reoccurring themes presented in each book, Rumi includes multiple points of view or voices that continually invite his readers to fall into “imaginative enchantment.” There are seven principal voices that Rumi uses in his writing:

Book one of the Masnavi must be read in order to understand the other five volumes. It is a poetic art where Rumi layers his writing. For example, he begins a story, then moves on to a story within that story, and again moves to another within that one. Through this composition style, the poet’s personal voice comes through to his audience. The Masnavi has no framed plot. Its tone includes a variety of scenes. It includes popular stories from the local bazaar to fables and tales from Rumi’s time. It also includes quotations from the Quran and from hadith accounts from the time of Mohammed.

Although there is no constant frame, style, or plot, Rumi generally follows a certain writing pattern that flows in the following order:[9]

Masnavi in Urdu literature is a form of poetry. It is in the majority of cases a poetic romance. It may extend to several thousand lines, but generally is much shorter. A few masnavis deal with ordinary domestic and other occurrences. Mir and Sauda wrote some of this kind. They are always in heroic couplets, and the common metre is bacchic tetrameter with an iambus for last foot.[10]