Khwāja Shamsu d-Dīn Muhammad Hāfez-e Shīrāzī (Persian: خواجه شمس‌الدین محمد حافظ شیرازی), known by his pen name Hāfez (1325/1326 – 1389/1390),[1] was a Persian lyric poet. His collected works composed of series of Persian poetry (Divan) are to be found in the homes of most Iranians, who learn his poems by heart and use them as proverbs and sayings to this day. His life and poems have been the subject of much analysis, commentary and interpretation, influencing post-Fourteenth Century Persian writing more than any other author.[2][3]

Themes of his ghazals are the beloved, faith, and exposing hypocrisy. His influence in the lives of Iranians can be found in "Hafez readings" (fāl-e hāfez, Persian: فال حافظ), frequent use of his poems in Persian traditional music, visual art and Persian calligraphy. His tomb in Shiraz is visited often. Adaptations, imitations and translations of Hafez' poems exist in all major languages. 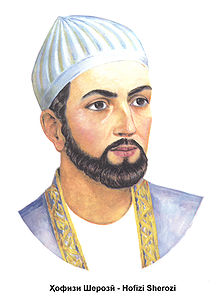 Despite his profound effect on Persian life and culture and his enduring popularity and influence, few details of his life are known. Accounts of his early life rely upon traditional anecdotes. Early tazkiras (biographical sketches) mentioning Hafez are generally considered unreliable.[4] The preface of his Divān, in which his early life is discussed, was written by an unknown contemporary of Hafez whose name may have been Moḥammad Golandām.[5] Two of the most highly regarded modern editions of Hafez's Divān are compiled by Moḥammad Qazvini and Qāsem Ḡani (495 ghazals) and by Parviz Natil Khanlari (486 ghazals).[6][7]

Modern scholars generally agree that Hafez was born either in 1315 or 1317; following an account by Jami 1390 is considered the year in which he died.[5][8] Hafez was supported by patronage from several successive local regimes: Shah Abu Ishaq, who came to power while Hafez was in his teens; Timur Lang (Tamerlane) at the end of his life; and even the strict ruler Shah Mubariz ud-Din Muhammad (Mubariz Muzaffar). Though his work flourished most under the twenty-seven year reign of Jalal ud-Din Shah Shuja (Shah Shuja),[9] it is claimed Hāfez briefly fell out of favor with Shah Shuja for mocking inferior poets (Shah Shuja wrote poetry himself and may have taken the comments personally), forcing Hāfez to flee from Shiraz to Isfahan and Yazd, although no historical evidence of this is available.[9] His mausoleum, Hāfezieh, is located in the Musalla Gardens of Shiraz. 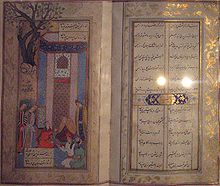 Divan of Hafez, with a Persian miniature at left and ghazals in nastaliq at right. Signed by Shah Qasem, 1617. National Museum of Iran, Tehran, Persia.

Many semi-miraculous mythical tales were woven around Hāfez after his death. It is said that by listening to his father's recitations Hāfez had accomplished the task of learning the Qur'an by heart at an early age (that is in fact the meaning of the word Hafez). At the same time Hāfez is said to have known by heart, the works of Jalal ad-Din Muhammad Rumi, Saadi, Farid ud-Din and Nizami.

According to one tradition, before meeting his patron, Hajji Zayn al-Attar, Hāfez had been working in a bakery, delivering bread to a wealthy quarter of the town. There he first saw Shakh-e Nabat, a woman of great beauty, to whom some of his poems are addressed. Ravished by her beauty, but knowing that his love for her would not be requited, he allegedly held his first mystic vigil in his desire to realize this union. During this he encountered a being of surpassing beauty who identified himself as an angel, and his further attempts at union became mystic; a pursuit of spiritual union with the divine. A Western parallel is that of Dante and Beatrice.

At age 60 he is said to have begun a Chilla-nashini, a 40-day-and-night vigil by sitting in a circle which he had drawn for himself. On the 40th day, he once again met with Zayn al-Attar on what is known to be their fortieth anniversary and was offered a cup of wine. It was there where he is said to have attained "Cosmic Consciousness". Hāfez hints at this episode in one of his verses where he advises the reader to attain "clarity of wine" by letting it "sit for 40 days".

Although Hafez almost never traveled out of Shiraz, in one tale Tamerlane (Timur) angrily summoned Hāfez to account for one of his verses:

If that Shirazi Turk would take my heart in hand
I would remit Samarkand and Bukhārā for his/her Hindu mole.

Samarkand was Timur's capital and Bokhara was his kingdom's finest city. "With the blows of my lustrous sword," Timur complained, "I have subjugated most of the habitable globe... to embellish Samarkand and Bokhara, the seats of my government; and you would sell them for the black mole of some boy in Shiraz!" Hāfez, so the tale goes, bowed deeply and replied, "Alas, O Prince, it is this prodigality which is the cause of the misery in which you find me". So surprised and pleased was Timur with this response that he dismissed Hafez with handsome gifts.[9]}}

Hafez was well acclaimed throughout the Islamic world during his lifetime, with other Persian poets imitating his work, and offers of patronage from Baghdad and India.[9] Today, he is the most popular poet in Iran; most libraries and personal collections of books in India,Pakistan and Iran contain his Diwan.[6]

Much later, the work of Hāfez would leave a mark on such Western writers as Ralph Waldo Emerson and Goethe. His work was first translated into English in 1771 by William Jones.

There is no definitive version of his collected works (or Dīvān); editions vary from 573 to 994 poems. In Iran, and Afghanistan[10], his collected works have come to be used as an aid to popular divination. Only since the 1940s has a sustained scholarly attempt - by Mas'ud Farzad, Qasim Ghani and others in Iran - been made to authenticate his work, and remove errors introduced by later copyists and censors. However, the reliability of such work has been questioned,[11] and in the words of Hāfez scholar Iraj Bashiri.... "there remains little hope from there (i.e.: Iran) for an authenticated diwan".

Though Hāfez’s poetry is influenced by Islam, he is widely respected by Hindus, Christians and others. The Indian sage of Iranian descent Meher Baba, who syncretized elements of Sufism, Hinduism, Zoroastrianism and Christian mysticism, recited Hāfez's poetry until his dying day.[12] October 12 is celebrated as Hafez Day in Iran.[13] 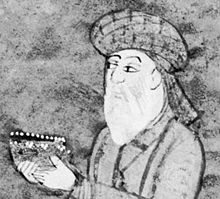 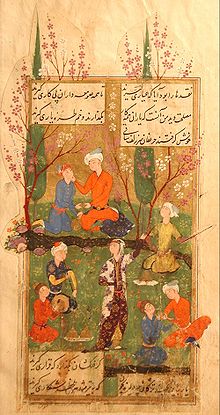 The question of whether his work is to be interpreted literally, mystically or both, has been a source of concern and contention to western scholars.[14] On the one hand, some of his early readers such as William Jones saw in him a conventional lyricist similar to European love poets such as Petrarch.[15] Others such as Wilberforce Clarke saw him as purely a poet of didactic, ecstatic mysticism in the manner of Rumi, a view which modern scholarship has come to reject.[16] This confusion stems from the fact that, early in Persian literary history, the poetic vocabulary was usurped by mystics who believed that the ineffable could be better approached in poetry than in prose. In composing poems of mystic content, they imbued every word and image with mystical undertones, thereby causing mysticism and lyricism to essentially converge into a single tradition. As a result, no fourteenth century Persian poet could write a lyrical poem without having a flavor of mysticism forced on it by the poetic vocabulary itself.[17][18] While some poets, such as Ubayd Zakani, attempted to distance themselves from this fused mystical-lyrical tradition by writing satires, Hafiz embraced the fusion and thrived on it. W.M. Thackston has said of this that Hafiz "sang a rare blend of human and mystic love so balanced...that it is impossible to separate one from the other."[19]

For this reason among others, the history of the translation of Hāfez has been a complicated one, and few translations into western languages have been wholly successful.

One of the figurative gestures for which he is most famous (and which is among the most difficult to translate) is īhām or artful punning. Thus a word such as gowhar which could mean both "essence, truth" and "pearl" would take on both meanings at once as in a phrase such as "a pearl/essential truth which was outside the shell of superficial existence".

Hafez often took advantage of the aforementioned lack of distinction between lyrical, mystical and panegyric writing by using highly intellectualized, elaborate metaphors and images so as to suggest multiple possible meanings. This may be illustrated via a couplet from the beginning of one of Hafez' poems.

Last night, from the cypress branch, the nightingale sang,
In Old Persian tones, the lesson of spiritual stations.

The cypress tree is a symbol both of the beloved and of a regal presence. The nightingale and birdsong evoke the traditional setting for human love. The "lessons of spiritual stations" suggest, obviously, a mystical undertone as well. (Though the word for "spiritual" could also be translated as "intrinsically meaningful.") Therefore, the words could signify at once a prince addressing his devoted followers, a lover courting a beloved and the reception of spiritual wisdom.[20]

The Tomb of Hafez 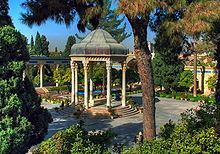 Tomb of Hafez in Shiraz.

Twenty years after his death, a tomb (the Hafezieh) was erected to honor Hafez in the Musalla Gardens in Shiraz. The current Mausolem was designed by André Godard, French archeologist and architect, in the late 1930s. Inside, Hafez's alabaster tombstone bore one of his poems inscribed upon it.

English translations of Poetry by Hafez