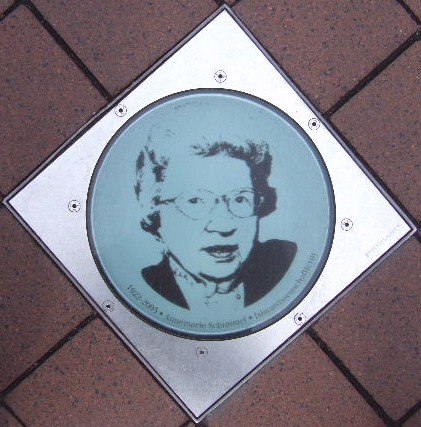 Annemarie Schimmel, SI, HI, (, &ndash; , ) was a well known and very influential German Iranologist and scholar who wrote extensively on and .

She received a doctorate in Islamic languages and civilization from the at the age of nineteen. At twenty-three, she became a professor of Arabic and Islamic studies at the (Germany) in 1946, where she earned a second doctorate in the history of religions in 1954.

A turning point in her life came in 1954 when she was appointed Professor of the History of Religion at the (). There she spent five years teaching in Turkish and immersing herself in the culture and mystical tradition of the country. She was a faculty member at from 1967 to 1992 and became Professor Emerita of Indo-Muslim Culture upon her retirement. She was also an honorary professor at the . She published more than 100 books on Islamic , and , and translated Persian, , , and Turkish and literature into English and German.

For her work on , or and , the government of Pakistan honored her with one of its highest civil awards of known as or 'Crescent of Excellence'. She was showered with many other awards from many countries of the world, including "Leopold Lucas Prize" of the "Evangelisch-Theologische" Faculty of the and 1995 prestigious . This award caused a controversy in Germany, as she had defended the outrage of the Islamic world against Salman Rushdie in a TV-interview.

* As Through A Veil
* And Muhammad Is His Messenger: The Veneration of the Prophet in Islamic Piety
* A Dance of Sparks: Imagery of Fire in Ghalib's Poetry
* A Two-Colored Brocade: The Imagery of Persian Poetry
* Deciphering the Signs of God: A Phenomenological Approach to Islam (1991-1992 , [http://www.giffordlectures.org/Browse.asp?PubID=TPDSOG&

] )
* : Study into the Religious Ideas of Sir Muhammad
* Mystical Dimensions of Islam
* Rumi's World : The Life and Works of the Greatest Sufi Poet
* Look! This Is Love
* The Triumphal Sun: A Study of the Works of Jalaloddinn
* Islam: An Introduction
* Islamic Calligraphy
* Make A Shield From Wisdom : Selected Verses from Nasir-i Khusraw's Divan
* Ernst Trumpp;: A brief account of his life and work
* The Mystery of Numbers
* Islam and the Wonders of Creation: The Animal Kingdom. (2003)