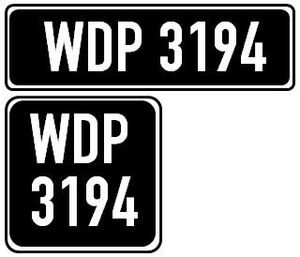 Standard layout configurations of license plates for Malaysian private vehicles. The white outlines of the plates, which are optional, are commonly favoured by local dealerships and service centres to allow the addition of their names and logos at the bottommost edge of the frame.

The most common form of Malaysian license plates are derived from early iterations of license plate designs in the United Kingdom, and were introduced after the introduction of motorised vehicles in the early 20th century, during British rule of territories in present-day Malaysia, as well as Singapore and Brunei, which inherit the same license plate system. Minimally, the license plate format consists of one or more letters (the first letter(s) serving as a vehicle or location prefix) followed by up to four numerical digits with no leading zeros. Accordingly, the configuration of a common Malaysian number plate may be in the form of ABC 1234, as depicted with two examples on the right. Early license plates originally included a dash or interpunct between the letters and the numbers; this element was dropped shortly after.

The sequence of licensed numbers issued begins with xAA 1 ("x" being the prefixes of the vehicle's registered location and vehicle type) to xAA 9999, followed by xBA 1 to xBY 9999, and so on. Motorcycles are now counted to 99999 from 1 August 2011. The newer motorcycle registered gets license plate xAA 10000.

The format is used in virtually all classes of vehicles with engines, including, unless stated later:

In standard regulation, all vehicle license plates in Malaysia, other than those issued to diplomats, dealers and taxis (see below), have white characters on a black background, regardless of the vehicle type,[1] a colour scheme unchanged since the introduction of the plates by the British. All vehicles must also display the same license plate number in the same colours at the front and rear of the vehicles.[1]

The shape and size of Malaysian license plates on cars are not restricted so long as the colours, layout, and size of letterings adhere to license plate guidelines. Arial Bold is normally preferred as the typeface of the letterings, but other readable fonts are also used occasionally.[1] While the rear number plates of motorcycles are required to be displayed in standard fashion,[1] there are fewer restrictions on number plates displayed at the front, allowing them to be placed on the front mudguard or fairing of the vehicle, with or without a black license plate. Early license plates were largely pressed metal, but have been largely replaced by plastic plates and characters since the 1970s.

Vehicle license plates used in Peninsular Malaysia start with a letter of the alphabet defining one of its states where the vehicles are registered. Following an ABC 1234 format, none of the license numbers use a checksum digit. The regional codes include:

In then British Malaya, "P", "M" and "W" series of plates, along with the "S" series, were originally created by the British colonial government for the four early Straits Settlements license plate prefixes during the 1900s. P denotes Penang island, M denotes Malacca, W denoted "Wellesley" of Province Wellesley, and S denotes Singapore. The Province Wellesley code W was issued until 1957 when it was combined with the Penang Island "P" series.

The "S" series is no longer administered by the Malaysian Road Transport Department following Singapore's secession from Malaysia in 1965. In the years that followed, the Singaporean license number system began to change with the modification and reintroduction of its "S" prefix and inclusion of a checksum digit as a suffix, in the addition to new prefixes and colour schemes for different classes of vehicles (See vehicle registration plates of Singapore).

The license number format is the result of extensive modifications in the decades following the states' entry into the Malaysia federation in 1963, in an effort to prevent conflicts with license numbers in Peninsular Malaysia and Singapore. The current system is:

Before Sarawak's entry into Malaysia in 1963, the license numbers did not include a "Q" suffix (thus reading "KA 1234"), and were originally distinguished only by "xD" prefixes, with "x" as a number representing any one of the then five Administrative Divisions in the state, followed by a number of up to four digits (i.e. "3D 5690"). For examples, the "1D" prefix was used to represent the First Division of Sarawak, present-day Kuching Division.

The original prefix series is as follows:

In time, single letters began to replace the original "xD" series, but after new Divisions were formed in the state, new series of xD license numbers were also issued. During the 1970s, Sarikei Division and Kapit Division were formed and split from the Third Division to become the Sixth and Seventh Divisions, and were therefore assigned the 6D and 7D prefixes, respectively.

By the 1980s, the following license number prefixes were issued in the state:

This format was then changed to placing the "Q" in front of the regional letters in 1991, which is in use till today. The 1988 format was retained for vehicles registered earlier than 1991 but new license numbers were started e.g. "QK 1" when the change over took place. The remaining two "xD" prefixes issued were discontinued and replaced with letters.

Vehicles registered in Sabah are allocated vehicle number plates commencing with the letter S, followed by the regional code and a serial number. When 9999 is reached, a serial letter is used after the serial number. Like the license number format in Sarawak, the system in Sabah was the result of extensive modifications in the decades following the states' entry into the Malaysia federation in 1963, in an effort to prevent conflicts with license numbers in Peninsular Malaysia and Singapore. Inadvertently, there will be a group of not exceeding 500 vehicles that bear the exact registration numbers. The current system is:

Before North Borneo's (Sabah) entry into Malaysia, its license numbers were already following a similar format as those in Malaya and Sarawak, but were defined by its own set of regional prefixes based on capitals of the state's then current divisions:

Between Sabah's entry into Malaysia in the 1960s and the 1980s, an "E" was added as a prefix to indicate the vehicle was registered in East Malaysia, followed by a second letter denoting the region in the state (i.e. from "J 1234" and "JA 1234" to "EJ 1234" and "EJA 1234"). The change aimed to overcome confusion with license numbers from Peninsular Malaysia, but such plates then became identical to Singaporean licence plates, which were issued with "E" and "EA" to "EZ" prefixes between 1972 and 1984.

Beginning the 1980s, all new Sabahan vehicle license numbers were issued in a "SA 1 A" format, the "S" and "A" being the prefixes while the "A" at the end is the suffix. The second prefix indicates the region — in this case, "A" refers to vehicles registered in Kota Kinabalu or in the West Coast Division. For example, in Tawau, the number plates will follow the series "ST 1 A". Since 2000, vehicles registered in Kota Kinabalu are issued a "SAA 1 A" format of license numbers after the exhaustion of the "SA 9999 Y" format in 1999.

Labuan, having been separated from the state as a Federal Territory in 1984 and is no longer subject to changes in Sabah's license number format, revert to using "L" as its license number prefix and retains its ABC 1234 format as the prefix does not conflict with prefixes of other states.

Another new license plate format, LIMO **** W/B, was introduced for Kuala Lumpur International Airport (KLIA) limousines following the opening of the airport in 1998. The format is dramatically different from standard Malaysian license plates, opting to designate "LIMO" as the prefix, following by the usual maximum of four digits of numbers and a location affix denoting location. As service of the limousines are restricted to Selangor (where the airport is located) and Kuala Lumpur, only the B or W letterings are used.

The local Road Transport Department allows sales of personalised numbers for taxis. Prefixes and suffixes are dependent on the location the taxi was registered in, with a single digit license numbers available for only around RM 100-200. This applies to all types of taxis except KLIA limousines.

Diplomats' number plates also use white on a black background and Consular Corps personnel have white on red plates. Unlike other licence plates, which have the format of (typically) ABC 1234, diplomatic licence plates are formatted (for example) 11-22-DC for (11 for Thailand,15 for Australia, 23 for the Netherlands, 49 for China, 52 for Slovakia, 54 for Kuwait, 58 for Brunei, 100 for European Union) Diplomatic corps or ending CC for Consular Corps (for Commonwealth countries). United Nations uses UN and some international organizations have the code PA. UN plates may be seen at UN headquarters at Damansara Heights, while a few PA plates can be spotted at the WorldFish Center in Penang.

The DC plates can be most commonly seen in Jalan Ampang in Kuala Lumpur, as there are many international embassies located in the area.

The Malaysian military uses Z as the starting prefix of licence plates for their vehicles, followed by a second prefix letter to denote the branch of the military. The Z prefix is not used as suffixes in any other type of Malaysian plate.

Malaysian police has its own plates as well. The plate of police is PDRM, with 4 random letters.

The Sultans, Rulers of States and their immediate Royalties uses a plate of their own, usually just bearing their official title e.g. "Tengku Mahkota Johor" is used by the Regent of Johor. This is limited to their official vehicle. The plates are usually coloured in Royal Yellow.

Similar to those issued in the United Kingdom, Motor Dealers' (Trade) plates, or temporary license plates, are typically carried by unregistered vehicles or vehicles without proper documents (i.e. a road tax and insurance). While the plate is most commonly utilised by authorised vehicle dealers and local vehicle companies with approvals and permits from the Transport Department, a small number of trade plates are used on private vehicle, typically luxury vehicles, to evade government taxes & duties for imported vehicles.

Trade plates carry significant amounts of restrictions. Applications for trade plates require deposits and monthly renewals. In addition, vehicles bearing trade plates are only allowed to be driven on public roads during certain hours of the day. As are typical license plates, vehicles registered to vehicle dealers are usually required to display trade plates at the front and rear, but are either hung outside or placed within the vehicles.

Trade plates are also used by foreign vehicles without proper permits or document from their countries of origin to gain permission of entry into Malaysia, when clearance is authorised by customs. In special cases, such as the transfer of show cars, trade plates may also be borrowed from the Transport Department.

Trade plates are made from pressed alloy, with two-tone paint colours and numbering systems varying by region:

Companies often have no use of specialised license numbers, adopting normal license numbers on vehicles they own. The Johor Corporation (JCorp), however, is a notable exception, using license plates bearing only the numbers "2692" or "2962".

Special plates, i.e. plates using special, distinctive prefixes, are available at extra cost. These special prefixes, depicted in their originally stylised form when possible, may denote the brand of the car (such prefixes are often used, for example, on Proton and Perodua cars) or special events. Among the more commonly used special prefixes are:

International plate is required when driving into Thailand, but not to Brunei, Singapore and Indonesia as they are dead ends, but entering Thailand can be continued to Laos/Burma/Cambodia, and to China, and all over Asia via the AH2 highway. MAL sticker is needed as well.