Marshfield is a town in Plymouth County, Massachusetts, United States, on Massachusetts's South Shore. The population was 25,132 at the 2010 census. 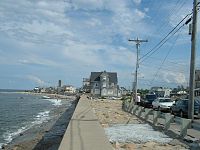 Marshfield is located on the South Shore, about where Cape Cod Bay meets the Massachusetts Bay.

Marshfield is named for the many salt marshes which border the salt and brackish borders of the town. There are three rivers, the North (along the northern border of the town), South (which branches at the mouth of the North River and heads south through the town) and the Green Harbor River (which flows just west of Brant Rock and Green Harbor Point at the south of town).

The South River divides a peninsula from the rest of the town, where Rexhame village and the Humarock and Fourth Cliff neighborhoods of the town of Scituate lie. The Scituate neighborhoods can be reached by land by two bridges, by boat, or by foot along Rexhame Beach. The Rexhame-Humarock peninsula is a barrier beach with an 84 ft (26 m). high moraine, one of only two barrier beach moraines on the east coast of the United States.

Marshfield is a popular summer beach destination. Tourists and vacationers cause the town's population to nearly double from Memorial Day through Labor Day weekend. Only full-time residents can vote on public tax matters.

There were 8,905 households out of which 37.4% had children under the age of 18 living with them, 60.9% were married couples living together, 10.1% had a female householder with no husband present, and 25.9% were non-families. 20.9% of all households were made up of individuals and 7.2% had someone living alone who was 65 years of age or older. The average household size was 2.73 and the average family size was 3.20.

On the national level, Marshfield is a part of Massachusetts's 10th congressional district, and is currently represented by William Keating (D). The state's senior (Class II) member of the United States Senate, re-elected in 2008, is John Kerry. The junior (Class I) senator, elected in 2010, is Scott Brown. In the United States Senate special election in Massachusetts, 2010 the results were; Scott Brown (R): 66% and Martha Coakley (D): 33%.

Marshfield is governed on the local level by the open town meeting form of government, and is led by a town administrator and a board of selectmen. The current board of selectmen includes a direct descendant of Pilgrim Richard Warren. The modern town hall is located at the intersection of Routes 3A and 139, just south of the South River. The town has its own police and fire stations, with firehouses located in Marshfield Hills, Ocean Bluff and near the fairgrounds. The town's Ventress Memorial Library is located a short distance east of the town hall, and is a member of the Old Colony Library Network (OCLN). There is also an independent library, the Clift Rodgers Free Library, in Marshfield Hills. The town has three post offices, in the same neighborhoods as the fire stations.

Marshfield operates its own school system for the town's nearly 4,700 students. There are five elementary schools:[16]

The Furnace Brook Middle School serves students from sixth through eighth grade. FBMS is a top school, winner of the Jimmy Fund Cancer Research Foundation Contest in 2006, 2007,2009 and 2011. The school consists of 3 clusters in each grade level (Red, Yellow, and Crimson in 6th; Green, Purple, and Blue in 7th; and Gold, Pink, and Orange in 8th).

Marshfield High School serves grades nine through twelve. Marshfield High School's athletic teams are known as the Rams, and their colors are green, white, and black. Their chief rival is Duxbury High School and they play against them in the Thanksgiving football game. There are no private or vocational schools in the town; the nearest private schools are in neighboring Scituate and Duxbury (as well as a charter school in Norwell). The nearest college is Bridgewater State College in Bridgewater, MA.

Route 3, also known as the Pilgrims Highway, skirts the town along the Pembroke town line, and can be accessed in Marshfield via the Route 139 exit. Route 139 loops through the town, with a long portion passing along the beaches of the Ocean Bluff and Fieldston neighborhoods before heading north and east into Pembroke. Route 3A also passes through the town, entering from the south in Duxbury and exiting over the North River into Scituate.