The 12-hour clock was developed over time from the mid-second millennium BC to the 16th century AD. 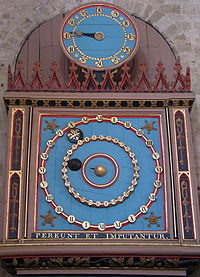 The 12-hour clock can be traced back as far as Mesopotamia and Ancient Egypt:[4] Both an Egyptian sundial for daytime use[5] and an Egyptian water clock for night time use were found in the tomb of Pharaoh Amenhotep I.[6] Dating to c. 1500 BC, these clocks divided their respective times of use into 12 hours each.

The Romans also used a 12-hour clock: daylight was divided into 12 equal hours (of, thus, varying length throughout the year) and the night was divided into four watches. The Romans numbered the morning hours originally in reverse. For example, "3 a.m." or "3 hours ante meridiem" meant "three hours before noon", compared to the modern usage of "three hours into the first 12-hour period of the day".[citation needed]

The first mechanical clocks in the 14th century, if they had dials at all, showed all 24 hours, using the 24-hour analog dial, influenced by astronomers' familiarity with the astrolabe and sundial, and their desire to model the apparent motion of the Sun. In Northern Europe these dials generally used the 12-hour numbering scheme in Roman numerals, but showed both a.m. and p.m. periods in sequence. This is known as the Double-XII system, and can be seen on many surviving clock faces, such as those at Wells and Exeter. Elsewhere in Europe, particularly in Italy, numbering was more likely to be based on the 24-hour system (I to XXIV), reflecting the Italian style of counting the hours.

During the 15th and 16th centuries, the 12-hour analog dial and time system, with its simpler and more economical construction, gradually became established as standard throughout Northern Europe for general public use. The 24-hour analog dial was reserved for more specialized applications, such as astronomical clocks and chronometers.

Most analog clocks and watches today use the 12-hour dial, on which the shorter and sometimes thicker hour hand rotates once every 12 hours and twice in one day. Some analog clock dials have an inner ring of numbers paired with the standard 1 to 12 ring of numbers. The number 12 is paired either with a 00 or a 24, while the numbers 1 through 11 are paired with the numbers 13 through 23, respectively. This modification allows the clock to also be read in the 24-hour notation. The 12-hour clock can be found in countries where the 24-hour clock is preferred.

Although it has largely been replaced today by the 24-hour notation around the world,[citation needed] especially in written communication, the 12-hour notation with a.m. and p.m. suffixes is common in some parts of the world. 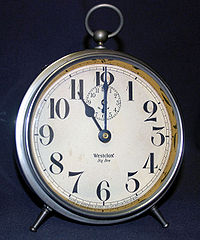 In most other countries the 12-hour clock is used in speech alongside the 24-hour clock.[citation needed]

In many European countries and Western countries, the 12-hour clock is commonly used in informal speech with descriptive phrases such as in the morning, in the afternoon, in the evening, and at night.[citation needed] Outside of English-speaking countries, the terms a.m. and p.m. are seldom used and often unknown. In England, the descriptive phrases were universal until comparatively recently - Rider's British Merlin almanack for 1795 (published in London) uses them, and so does a similar almanack for 1773. 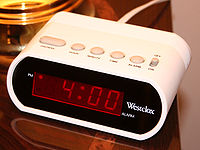 A typical digital 12-hour alarm clock indicating p.m. with a dot to the left of the hour

Most other languages lack formal abbreviations for "before noon" and "after noon", and their users use the 12-hour clock only orally and informally.[citation needed]

In practice, when abbreviations and phrases are omitted, one relies on sentence context and common sense to distinguish the meaning. For example, if one schedules an appointment with a doctor at "9:00" on a certain date, that means 9:00 a.m.; but if a social dance is scheduled to begin at "9:00", it means 9:00 p.m.

Some stylebooks suggest the use of a space between the number and the a.m. or p.m. abbreviation.[citation needed] Style guides recommend not using a.m. and p.m. without a time preceding it,[8] although doing so can be advantageous when describing an event that always happens before or after noon.

The hour/minute separator varies between countries: some use a colon, others use a period (full stop).

Informal speech and rounding off

It is common to round a time to the nearest five minutes and express the time as so many minutes past an hour (e.g., 5:05 is "five past five" or "five oh five") or minutes to an hour (e.g., 5:55 is "five to six"). The period 15 minutes is often expressed as "a quarter" (hence 5:15 is "a quarter past five") and 30 minutes is expressed as "half" (hence 5:30 is "half past five" or merely "half five", the latter expression not being common in the USA). The time 8:45 is spoken as "(a) quarter to (or of, before, or til) nine".[9] Moreover, in situations where the relevant hour is obvious or has been recently mentioned, speakers can state simply "quarter to", "half past", etc., to avoid elaborate sentences in particularly informal conversations.

Instead of meaning 5:30, the "half five" convention is sometimes used to mean 4:30, i.e., "half-way to five", especially in the more German-influenced parts of the U.S.A (the Midwest, essentially). "Half-way to five" follows the usage in German speaking countries. It is also found in Indonesian, Norwegian, Danish, Swedish, Dutch, Serbian, Estonian, Latvian, Lithuanian, Polish, Czech, Slovak, Finnish, Hungarian, Russian and Afrikaans.

Formal speech and times to the minute

Minutes may be expressed as an exact number of minutes past the hour specifying the time of day (e.g., 6:32 p.m. is "thirty-two minutes past six in the evening").

Times of day ending in ":00" minutes (full hours) are often said in English as the numbered hour followed by o'clock (10:00 as ten o'clock, 2:00 as two o'clock). This may be followed by the "a.m." or "p.m." designator, though phrases such as in the morning, in the afternoon, in the evening, or at night more commonly follow analog-style terms such as o'clock, half past three, and quarter to four. O'clock itself may be omitted, telling a time as four a.m. or four p.m. Minutes ":01" to ":09" are usually pronounced as oh one to oh nine (nought or zero can also be used instead of oh). Minutes ":10" to ":59" are pronounced as their usual number-words. For instance, 6:02 a.m. can be pronounced six oh two a m; 6:32 a.m. could be told as six thirty-two a.m.

Confusion at noon and midnight

To avoid confusion, the correct designation for twelve o'clock is 12 noon or 12 midnight. Alternatively, the twenty-four-hour-clock system may be used. The abbreviation a.m. stands for ante-meridiem (before the sun has crossed the line) and p.m. for post-meridiem (after the sun has crossed the line). At 12 noon the sun is at its highest point in the sky and directly over the meridian. It is therefore neither "ante-" nor "post-".[13]

However, as discussed elsewhere in the same reference, the sun is highest at 12 noon local Solar time, not 12 noon civil time, the difference being given by the equation of time[14] plus the effect of time zones and of the daylight saving time.

The American Heritage Dictionary of the English Language (Fourth Edition, 2000) has a similar usage note on this topic: "Strictly speaking, 12 a.m. denotes midnight, and 12 p.m. denotes noon, but there is sufficient confusion over these uses to make it advisable to use 12 noon and 12 midnight where clarity is required."[15]

The use of "12:00 midnight" or "midnight" is still problematic because it does not distinguish between the midnight at the start of a particular day and the midnight at its end. To avoid confusion and error, some U.S. style guides recommend either clarifying "midnight" with other context clues, or not referring to midnight at all. For an example of the latter method, "midnight" is replaced with "11:59 p.m." for the end of a day or "12:01 a.m." for the start of the next day. That has become common in the United States in legal contracts and for airplane, bus, or train schedules, though some schedules use other conventions.