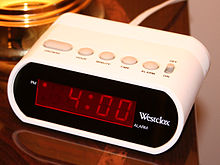 Basic digital alarm clock without a radio. The mark in the top-left of the display indicates that the time is 4:00pm, not 4:00am.

A digital clock is a type of clock that displays the time digitally, i.e. in cyphers, as opposed to an analog clock, where the time is displayed by hands. Digital clocks are often associated with electronic drives, but the "digital" description refers only to the display, not to the drive mechanism. (Both analog and digital clocks can be driven either mechanically or electronically, but "clockwork" mechanisms with digital displays are rare.) The biggest digital clock is the Lichtzeitpegel ("Light Time Level") on the television tower Rheinturm Düsseldorf, Germany.

Perhaps the earliest digital timepieces were Plato clocks. These spring-wound pieces consisted of a glass cylinder with a column inside, affixed to which were small digital cards with numbers printed on them, which flipped as time passed. The Plato clocks were introduced at the St. Louis World Fair in 1904, produced by Ansonia Clock Company. Eugene Fitch of New York patented the clock design in 1903.[1]

Josef Pallweber, a Swiss timepiece maker born in Salzburg, Austria, created and produced a mechanic-digital clock model in 1956. The earliest patent for a digital clock was held in the United States by D.E Protzmann and others. Dated October 23, 1956, this patent describes a digital alarm clock. D.E Protzmann and his associates also patented another digital clock in 1970, which was said to use a minimal amount of moving parts. Two side-plates held digital numerals between them, while an electric motor and cam gear outside controlled movement.[2]

In 1970, the first digital wristwatch with an LED display was mass-produced. Called the Pulsar, and produced by the Hamilton Watch Company, this watch was hinted at two years prior when the same company created a prototype digital watch for Kubrick's 2001: A Space Odyssey.[3] Throughout the 1970s, despite the initial hefty cost of digital watches, the popularity of said devices steadily rose.

Over the years, many different types of digital alarm clocks have been developed. Novelty clocks, such as the Gun O'Clock, require more involved actions to deactivate the alarm. [4]

Digital clocks typically use the 50 or 60 hertz oscillation of AC power or a 32,768 hertz crystal oscillator as in a quartz clock to keep time. Most digital clocks display the hour of the day in 24 hour format; in the United States and a few other countries, a more commonly used hour sequence option is 12 hour format[citation needed] (with some indication of AM or PM). Emulations of analog-style faces often use an LCD screen, and these are also sometimes described as "digital".

To represent the time, most digital clocks use a seven-segment LED, VFD, or LCD display for each of four digits. They generally also include other elements to indicate whether the time is AM or PM, whether or not an alarm is set, and so on.

If people find difficulty in setting the time in some designs of digital clocks in electronic devices where the clock is not a critical function, they may not be set at all, displaying the default after powered on, 00:00 or 12:00 [1][2].

Digital clocks that run on mains electricity and have no battery must be reset every time the power is cut off or if they are moved. Even if power is cut off for a second, most clocks will still have to be reset. This is a particular problem with alarm clocks that have no "battery" backup, because even a very brief power outage during the night usually results in the clock failing to trigger the alarm in the morning.

To reduce the problem, many devices designed to operate on household electricity incorporate a battery backup to maintain the time during power outages and during times of disconnection from the power supply. More recently, some devices incorporate a method for automatically setting the time, such as using a broadcast radio time signal from an atomic clock, getting the time from an existing satellite television or computer connection, or by being set at the factory and then maintaining the time from then on with a quartz movement powered by an internal rechargeable battery.

A digital clock built into an oven.