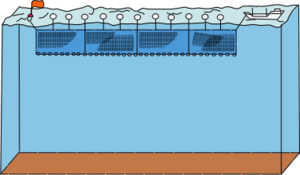 Drift netting is a fishing technique where nets, called drift nets, are allowed to float freely at the surface of a sea or lake. Usually a drift net is a gill net with floats attached to a rope along the top of the net, and weights attached to another rope along the foot of the net to keep the net vertical in the water.[1] Drift nets are placed by ships and are left free-floating until retrieved. These nets usually target schools of pelagic fish. Drift nets are a type of gill net because of the tendency for the fishes' gills to get caught in the net.

Traditionally drift nets were made of organic materials, such as hemp, which were biodegradable. Prior to 1950s, nets tended to have a larger mesh size.[2] The larger mesh only caught the larger fish, allowing the smaller, younger ones to slip through. When drift net fishing became large scale during 1950s, nets were changed to synthetic materials with smaller mesh size.[1] Synthetic nets last longer, are odorless, and are nearly invisible in the water, but did not biodegrade.[2]

Drift net fishing became a desirable fishing practice because it is extremely cost effective. Nets can be placed by low-powered vessels making it very fuel efficient. Drift nets are also highly effective at bringing in large amounts of fish in one catch.[1]

Prior to 1960s net size was not limited, and commercially produced nets were commonly as long as 50 km (~31 miles).[3] In 1987 the U.S. enacted the Driftnet Impact, Monitoring, Assessment and Control Act limiting the length of nets used in American waters to 1.5 nautical miles (~1.7 miles). In 1992 the United Nations General Assembly (UNGA) banned the practice of drift net fishing.[4]

Any fish that crosses the path of a drift net in the ocean may be tangled or caught in the net. Any non-target individual caught in the net is called by-catch. In 1994 United Nations Food and Agriculture Organization (UNFAO) estimated global by-catch rates to be as high as 27 million tons of fish discarded by fisheries each year.[5] Many individuals of non-target species perish as by-catch in the cast of each drift net. As a result, many of these species are now endangered.[6] Species caught as by-catch include sharks, dolphins, whales, turtles, sea birds, and other marine mammals. Since nets are placed and may not be retrieved for days, air-breathing mammals that become tangled in the nets drown if they are unable to free themselves.

In 1990s drift net fisheries were responsible for 30,000 tons of sharks and skates in global by-catch annually.[7] While filming National Geographic's Incidental Kill in the California Channel Islands where swordfish and various sharks swim north, Howard Hall and his diving crew discovered many drift net boats had placed nets that night. The nets were one mile long each and nearly 100 feet high placed to target swordfish and thresher sharks. Hall and his crew swam half the length of one net and in that length discovered 32 dead blue sharks in the net as well as 2 hammer head sharks, a sea lion, and a manta ray all of which were thrown back into the ocean when the net was hauled in.[8]

Catch that is non-targeted or unmarketable is thrown back to the ocean as dead material or with injuries that may result in death. Dead material thrown back into the ocean, if not eaten, decomposes. In order for the carcasses to decompose, bacteria use oxygen to break down the organic matter.[10] Large amounts of dead matter decomposing in the ocean causes the surrounding levels of dissolved oxygen to decrease.

Drift nets lost or abandoned at sea due to storms causing strong currents, accidental loss, or purposeful discard become ghost nets. Synthetic nets are resistant to rot or breakdown, therefore ghost nets fish indefinitely in the oceans. Marine animals are easily tangled in ghost nets. The float line on the net allows it to be pushed in the current which causes ecological damage to plant life and substrate habitats as the nets drag the sea floor.[11]

Declining fish stocks have caused illegal fishing practices to increase.[14] Illegal, unregulated, or unreported fishing catch between 11 and 26 million tons a year which accounts for one quarter of global catch.[15] Illegal fishing is taking undersized fish, fishing in closed waters, taking more fish than permitted, or fishing during seasonal closures. Illegal fishing is prominent due to lack of enforcement or punishments.[14]

Despite controls, violations of drift net fishing laws are commonplace.[1] The Mediterranean Sea is the most overexploited. With 21 modern states with coastline on the sea, there are many fisheries harvesting one small area. When drift net gear was banned, manufacturers modified the design of the nets so they no longer fell under the definition put in place.[1] A new definition of what accounted as a drift net was established in 2007 as "any gillnet held on the sea surface or at a certain distance below it by floating devices, drifting with the current, either independently or with the boat to which it may be attached. It may be equipped with devices aiming to stabilize the net or to limit drift".[1]

Japanese drift net fishing began to draw public attention in the mid-1980s when Japan and other Asian countries began to send large fleets to the North Pacific Ocean to catch tuna and squid. Japan operated about 900 drift net vessels earning around $300 million a year. Those fishing boats were blamed not only for the indiscriminate destruction of marine life, but also for the poaching of North Pacific salmon, harming the U.S. and Canadian fishing industries, and threatening the jobs of fishermen who did not use such methods. The first Bush administration opposed a U.S. driftnet ban because it would allegedly conflict with a treaty with Japan and Canada regarding salmon fishing in the North Pacific.[16]

Drift nets also are used in ecological studies in regard to downstream drift of invertebrates. The nets are strung across a stream and allowed to sit over night, collecting samples. These nets are crucial in the understanding of how watersheds function.