Mallya Aditi is named after Bangalore billionaire and Member of Parliament Vijay Mallya as a result of a generous endowment. It has been consistently ranked among India's top ten private schools. [1]

Part of the school campus

Aditi, as it is popularly known, has a broad curriculum for its elementary school students that is designed to acquaint them with both Eastern and Western culture and methods of study. Aditi students study Indian languages, namely Hindi and Kannada, but can also study European and East Asian languages. Students are tutored in Western classical music as well as Indian dance and Indian classical music.

Aditi has consistently received recognition for the excellence of its faculty. [2]

Internships are compulsory in 12th grade. 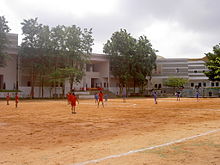 Sports include basketball, football, cricket and volleyball. School starts at 8:05 a.m. and ends at 2:55 p.m., with a break from 10:00-10:30 a.m. and from 12:30-1:00 p.m. There are three computer labs - these serve The Junior School, The Senior School and the faculty. Alongside these computer labs, there are two "Tech Hubs", which also serve Students and Faculty with computers and educational material. There is also the Srishti School of Art Design and Technology - an affiliated school - located on the Aditi campus.

The school has also produced plays, musicals and concerts. There are a variety of student organizations, such as the Dramatic Society, Model United Nations, Debating, Quiz and Chess Clubs, a school choir, the M.A.I.S Film society, Robotics Club and the Photography Club.

Aditi students have their own newspapers and magazines. Past student publications include Silhouette, The Scribe, The Scribbler, The White Crayon and The Wise Guy. The Current student Magazine is "The Big Issue".

The school's teams in football and basketball regularly perform well in inter-school events. Aditi's football field is less than a third the size of a true football field, with new and improved goals, and a mud surface. The sports teams have excelled in many inter-school tournaments.

Aditi students of all grades have a DOD week every year (Domains of Development). Domains of Development is a learning project undertaken by MAIS. A whole week is allotted for DOD for grades 9-12 and two weeks for grades 5-8. MAIS has identified four Domains of Development: personal, social, experiential and aesthetic. So one grade might attend a workshop in pottery and paper-making and another might take off to Chennai to study South Indian music and dance while yet another might go rock climbing and trekking. The graduating class interns with professionals, testing out various careers of their choice.[3]

International understanding has been fostered by MAIS's annual student exchange with St. Benno-Gymnasium in Dresden, Germany and two schools, Realschule Germering - Unterpfaffenhofen (near Munich), and Sophie-la-Rochelle in Kaufbeuren (a medieval town near the Alps) in Bavaria. The Bavarian exchange was organised after an MOU signed between the governments of Karnataka and Bavaria.

There is also an exchange programme for staff and students with the Brearley School in New York and the Castilleja School, California.

Aditi is known across Bangalore for its proactive Interact Club, founded and supported by the Rotary Club of Bangalore. A tradition at Aditi is Out of the Box, a well-known inter school competition run by the school's Interact Club, which attracts contestants from more than 20 schools. It was started in 2002 and has grown every year. The Interact Club also organizes an annual Retreat, in which club members attend an array of personal development workshops conducted by experienced professionals in the field. Past events conducted by the Interact Club include fund raising Music Concert, which aimed at bringing together musical talent in schools and colleges around Bangalore in the hope of supporting the education of underprivileged children, and Fast Forward, a 2 day fund raising carnival that aimed towards bringing about an awareness regarding the current environmental situation.

The Interact Club also conducts bake sales and personal development workshops throughout the year, and participates in other community-driven activities such as the annual Terry Fox Run and the collection of money for the National Association for the Blind.

In 2005, the school was awarded the Cambridge Fellowship by the University of Cambridge in England, in recognition of academic excellence among schools offering Cambridge qualifications. Only 20 secondary schools in the world have received this fellowship. In early 2005, Aditi also won the Intel Award for the Best Integration of Technology in Education 2004, from a pool of India's best schools.

In addition to this, Aditi has been one of the two or three schools chosen worldwide by the University of Cambridge to be prototypes in an experimental science exam (where the practical paper is completed through computer simulation). These schools were chosen based on their excellent academic record, and the results of the students in the board exams will decide whether or not the experimental paper will come into practice.