Upper Silesia
This article is about the historical region. For the former Prussian province, see Upper Silesia Province. 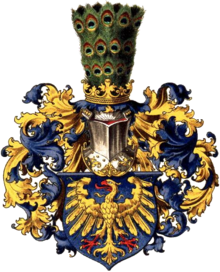 Upper Silesia (Polish: Górny Śląsk; Silesian: Gůrny Ślůnsk[1]; Czech: Horní Slezsko; German: Oberschlesien; Silesian German: Oberschläsing; Latin: Silesia Superior) is the southeastern part of the historical and geographical region of Silesia. Since the 9th century, Upper Silesia has been part of (chronologically) Greater Moravia, the Duchy of Bohemia, the Piast Kingdom of Poland, again of the Lands of the Bohemian Crown and the Holy Roman Empire, as well as of the Habsburg Monarchy from 1526. In 1742 the bulk of Upper Silesia was annexed by the Kingdom of Prussia, and in 1871 became part of the German Empire. These parts returned to the Republic of Poland in 1945.

Upper Silesia is situated on the upper Oder River, north of the Eastern Sudetes mountain range and the Moravian Gate, which form the southern border with the historic Moravia region. Within the adjacent Silesian Beskids to the east, the Vistula River rises and turns eastwards, the Biała and Przemsza tributaries mark the eastern border with Lesser Poland. In the north, Upper Silesia borders on Greater Poland, and in the west on the Lower Silesian lands, the adjacent region around Wrocław also referred to as Middle Silesia.

It is currently split into a larger Polish and the smaller Czech Silesian part, which is located within the Czech regions of Moravia-Silesia and Olomouc. The Polish Upper Silesian territory covers most of the Opole Voivodeship ("Opole Silesia"), except for the Lower Silesian counties of Brzeg and Namysłów, and the Silesian Voivodeship, except for the Lesser Polish counties of Będzin, Bielsko (eastern part), Częstochowa with the city of Częstochowa, Kłobuck, Myszków, Zawiercie and Żywiec as well as the cities of Dąbrowa Górnicza, Jaworzno and Sosnowice.

According to the 9th century Bavarian Geographer, the West Slavic Opolanie tribe had settled on the upper Oder River since the days of the Migration Period, centered around the gord of Opole. At the time of Prince Svatopluk I (871–894), all Silesia was a part of his Great Moravian realm. Upon its dissolution after 906, the region fell under the influence of the Přemyslid rulers of Bohemia, Duke Spytihněv I (894–915) and his son Vratislaus I (915–921), possibly the founder and name giver of the Silesian capital Wrocław (Czech: Vratislav).

Until 990 the newly installed Piast duke Mieszko I of the Polans had conquered large parts of Silesia. From the Middle Silesia fortress of Niemcza, his son and successor Bolesław I Chrobry (992–1025), having established the Diocese of Wrocław, subdued the Upper Silesian lands of the pagan Opolanie, which for several hundred years were part of Poland, though contested by Bohemian dukes like Bretislaus I, who from 1025 invaded Silesia several times. Finally in 1137, the Polish prince Bolesław III Wrymouth (1107–1138) came to terms with Duke Sobeslaus I of Bohemia, when a peace was made confirming the borderline along the Sudetes.

However, this arrangement fell apart when upon the death of Bolesław III and his testament the fragmentation of Poland began, which decisively enfeebled its central authority. The newly established Duchy of Silesia became the ancestral homeland of the Silesian Piasts, descendants of Bolesław's eldest son Władysław II the Exile , who nevertheless saw themselves barred from the succession to the Polish throne and only were able to regain their Silesian home territory with the aid of the Holy Roman Emperor. 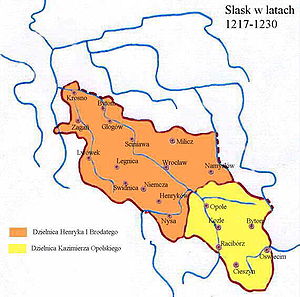 The failure of the Agnatic seniority principle of inheritance also led to the split-up of the Silesian province itself: in 1172 Władysław's second son Mieszko IV Tanglefoot claimed his rights and received the Upper Silesian Duchy of Racibórz as an allodium from the hands of his elder brother Duke Bolesław I the Tall of Silesia. In the struggle around the Polish throne, Mieszko additionally received the former Lesser Polish lands of Bytom, Oświęcim, Zator, Siewierz und Pszczyna from the new Polish High Duke Casimir II the Just in 1177. When in 1202 Mieszko Tanglefoot had annexed the Duchy of Opole of his deceased nephew Jarosław, he ruled over all Upper Silesia as Duke of Opole and Racibórz.

In the early 13th century the ties of the Silesian Piasts with the neighbouring Holy Roman Empire grew stronger as several dukes married scions of German nobility. Promoted by the Lower Silesian Duke Henry I the Bearded, from 1230 also regent over Upper Silesia for the minor sons of his late cousin Duke Casimir I of Opole, large parts of the Silesian lands were settled with German immigrants in the course of the Ostsiedlung, establishing numerous cities according to German town law. The plans to re-unifiy Silesia shattered upon the Mongol invasion of Poland and the death of Duke Henry II the Pious at the 1241 Battle of Legnica. Upper Silesia further fragmented upon the death of Duke Władysław Opolski in 1281 into the duchies of Bytom, Opole, Racibórz and Cieszyn. About 1269 the Duchy of Opava was established on adjacent Moravian territory, ruled by the Přemyslid duke Nicholas I, whose descendants inherited the Duchy of Racibórz in 1336. As they ruled both duchies in personal union, Opava grew into the Upper Silesian territory.

In 1327 the Upper Silesian dukes, like most of their Lower Silesian cousins, had sworn allegiance to King John of Bohemia, thereby becoming vassals of the Bohemian kingdom. During the re-establishment of Poland under King Casimir III the Great, all Silesia was specifically excluded as non-Polish land by the 1335 Treaty of Trentschin becoming a land of the Bohemian Crown and—indirectly—of the Holy Roman Empire. By the mid 14th century, the influx of German settlers into Upper Silesia was stopped by the Black Death pandemic. Unlike in Lower Silesia, the Germanization process was halted; still a majority of the population spoke Polish and Silesian as their native language, often together with German (Silesian German) as a second language. In the southernmost areas, also Lach dialects were spoken. While Latin, Czech and German language were used as official language in towns and cities, only in the 1550s (during the Protestant Reformation) did records with Polish names start to appear.

Upper Silesia was hit by the Hussite Wars and in 1469 was conquered by King Matthias Corvinus of Hungary, while the Duchies of Oświęcim and Zator fell back to the Polish Crown. Upon the death of the Jagiellonian king Louis II in 1526, the Bohemian crown lands were inherited by the Austrian House of Habsburg. In the 16th century, large parts of Silesia had turned Protestant, promoted by reformers like Caspar Schwenckfeld. After the 1620 Battle of White Mountain, the Catholic Emperors of the Habsburg dynasty forcibly re-introduced Catholicism, led by the Jesuits.[citation needed] 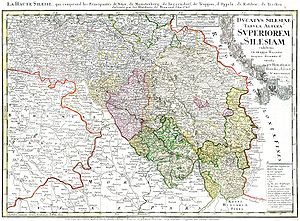 Lower Silesia and most of Upper Silesia were occupied by the Kingdom of Prussia in 1742 during the First Silesian War and annexed by the terms of the Treaty of Breslau. A small part south of the Opava River remained within the Habsburg-ruled Bohemian Crown as the "Duchy of Upper and Lower Silesia", colloquially called Austrian Silesia. Incorporated into the Prussian Silesia Province from 1815, Upper Silesia became an industrial area taking advantage of its plentiful coal and iron ore. Prussian Upper Silesia became a part of the German Empire in 1871.

In 1919, after World War I, the eastern part of Prussian Upper Silesia (with a majority of ethnic Poles) came under Polish rule as the Silesian Voivodeship, while the mostly German-speaking western part remained part of the German Reich as the newly established Upper Silesia Province. In early 1919, the Polish–Czechoslovak War broke out around Cieszyn Silesia, whereafter Czechoslovakia gained the Zaolzie strip in addition to the Hlučín Region.

From 1919-1921 three Silesian Uprisings occurred among the Polish-speaking populace of Upper Silesia; the Battle of Annaberg was fought in the region in 1921. In the Upper Silesia plebiscite of March 1921, a majority of 60% voted against merging with Poland, with clear lines dividing Polish and German communities. The exact border, the maintenance of cross-border railway traffic and other necessary co-operations, as well as equal rights for all inhabitants in both parts of Upper Silesia, were all fixed by the German-Polish Accord on East Silesia,[2] signed in Geneva on May 15, 1922. On June 20, Germany ceded, de facto, the eastern parts of Upper Silesia, becoming part of Silesian Voivodeship of the Second Polish Republic.

After 1945, almost all of Upper Silesia that was not ceded to Poland in 1922 was transferred to the Republic of Poland. A majority of the German-speaking population was expelled in accordance with the decision of the victorious Allied powers at their 1945 meeting at Potsdam. This expulsion program also included German speaking inhabitants of Lower Silesia, eastern Pomerania, Gdańsk (Danzig), and East Prussia. The German expellees were transported to the present day Germany (including the former East Germany), and they were replaced with Poles, many from former Polish provinces taken over by the USSR in the east. A good many German-speaking Upper Silesians were relocated in Bavaria. A small part of Upper Silesia stayed as part of Czechoslovakia as Czech Silesia.

The expulsions of German-speakers did not totally eliminate the presence of a population that considered itself German. Upper Silesia, in 1945, had a considerable number of Roman Catholic mixed bilingual inhabitants that spoke both German and Polish dialects, and their Polish linguistic skills were solid enough for them to be allowed to remain in the area. With the fall of communism and Poland joining the European Union, there were enough of these remaining in Upper Silesia to allow for the recognition of the German minority in Poland by the Polish government. 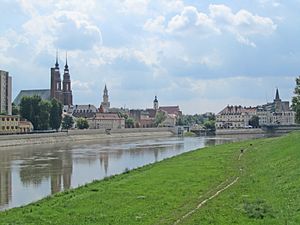 Opole on the Oder River

The historical capital of Upper Silesia is Opole, neverteheless the largest towns of the region are located in the Upper Silesian Industrial Region, the total population of which is 3,487,000.

Population figures as of 1995 (all in Poland unless otherwise indicated) 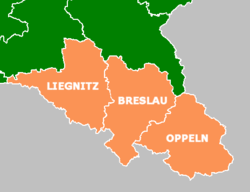