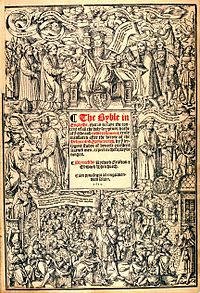 The Great Bible was the first authorized edition of the Bible in English, authorized by King Henry VIII of England to be read aloud in the church services of the Church of England. The Great Bible was prepared by Myles Coverdale, working under commission of Sir Thomas Cromwell, Secretary to Henry VIII and Vicar General. In 1538, Cromwell directed the clergy to provide "one book of the bible of the largest volume in English, and the same set up in some convenient place within the said church that ye have care of, whereas your parishioners may most commodiously resort to the same and read it."

The Great Bible includes much from the Tyndale Bible, with the objectionable features revised. As the Tyndale Bible was incomplete, Coverdale translated the remaining books of the Old Testament and Apocrypha from the Latin Vulgate and German translations, rather than working from the original Greek, Hebrew and Aramaic texts. Although called the Great Bible because of its large size, it is known by several other names as well: the Cromwell Bible, since Thomas Cromwell directed its publication; Whitchurch's Bible after its first English printer; the Chained Bible, since it was chained to prevent removal from the church. It has also been termed less accurately Cranmer's Bible, since Thomas Cranmer's preface appeared only in the second edition.[1]

The Tyndale New Testament had been published in 1525, followed by his English version of the Pentateuch in 1530; but both employed vocabulary, and appended notes, that were unacceptable to English churchmen, and to the King. Tyndale's books were banned by royal proclamation in 1530, and Henry then held out the promise of an officially authorised English Bible being prepared by learned and catholic scholars. In 1534, Thomas Cranmer sought to advance the King's project by press-ganging ten diocesan bishops to collaborate on an English New Testament, but most delivered their draft portions late, inadequately, or not at all. By 1537 Cranmer was saying that the proposed Bishops' Bible would not be completed until the day after Doomsday.

The King was becoming impatient with the slow progress, especially in view of his conviction that the Pilgrimage of Grace had been substantially exacerbated due to the rebels' exploitation of popular religious ignorance. With the bishops showing no signs of completing their task, Cromwell gave official approval to the Matthew Bible as an interim measure in 1537, the year of its publication under the pseudonym "Thomas Matthew". The Matthew Bible combined the New Testament of William Tyndale, and as much of the Old Testament as Tyndale had been able to translate before being put to death the prior year for "heresy."

Coverdale based the Great Bible on Tyndale's work, but removed the features objectionable to the bishops. He translated the remaining books of the Old Testament using mostly the Latin Vulgate and German translations. Coverdale's failure to translate from the original Hebrew, Aramaic, and Greek texts gave impetus to the Bishops' Bible.

...And delyver them beastes, that they maye sett Paul on, and brynge him safe unto Felix the hye debyte (For he dyd feare lest happlye the Jewes shulde take hym awaye and kyll him, and he hym selfe shulde be afterwarde blamed, as though he wolde take money.) and he wrote a letter after thys maner.

The non-italicized portions are taken over from Tyndale without change, but the italicized words, which are not found in the Greek text translated by Tyndale, have been added from the Latin. (The added sentence can also be found, with minor verbal differences, in the Douai-Rheims New Testament.) These inclusions appear to have been done to make the Great Bible more palatable to conservative English churchmen, many of whom considered the Vulgate to be the only legitimate Bible.

The psalms in the Book of Common Prayer of 1662 continue to be taken from the Great Bible rather than the King James Bible.

In 1568, the Great Bible was superseded as the authorised version of the Anglican Church by the Bishops' Bible. The last of over 30 editions of the Great Bible appeared in 1569.[2]

The first edition[3] was a run of 2,500 copies that were begun in Paris in 1539. Much of the printing was done at Paris, and after some misadventures where the printed sheets were seized by the French authorities on grounds of heresy (since relations between England and France were somewhat troubled at this time), the publication was completed in London in April 1539. It went through six subsequent revisions between 1540 and 1541. The second edition of 1540, included a preface by Thomas Cranmer, Archbishop of Canterbury, recommending the reading of the scriptures. (Cranmer’s preface was also included in the front of the Bishops' Bible.)

A version of Cranmer's Great Bible can be found included in the English Hexapla, produced by Samuel Baxter & Sons in 1841. However copies of this work are fairly rare.

The most available reprinting of the Great Bible's New Testament (minus its marginal notes) can be found in the second column of the New Testament Octapla edited by Luther Weigle, chairman of the translation committee that produced the Revised Standard Version.[4]