Throughout history, printers' errors and peculiar translations have appeared in Bibles published throughout the world. 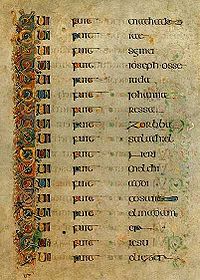 A page from the genealogy of Jesus, in Kells

The Book of Deer, 10th-century

Has a number of errors. In the genealogy of Jesus, in the Gospel of Luke, it has Seth as the first man and grandfather of Adam.[3] 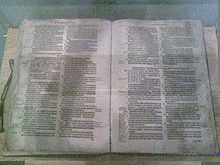 The Treacle Bible opened at the page of the eponymous curiosity. St Mary’s Church, Banbury.

The Wicked Bible renders Exodus 20:14 as "thou shalt commit adultery".

In various printings of the King James Version of the Bible, some of the more famous examples have been given their own names. Among them are: