Norman Toponymy refers to all place-names in Normandy. Some belong to the common heritage of the Langue d'oïl extension zone in northern France and Belgium; this is called Pre-Normanic. Others contains Old Norse and Old English male names and toponymic appellatives. They intermingle with romance male names and place-name elements to create a very specific substratum typical of Normandy within the extension zone of the Langue d'oïl. These are sometimes called Normanic.[1] 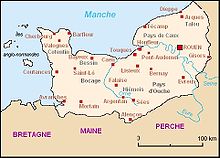 Normandy's main cities. Only 4 have Normanic names : Dieppe, Cherbourg, Honfleur and Barfleur. Harfleur, which was an important port before le Havre's foundation, can be added.

There is still a significant number of Celtic names, like everywhere in France and in western Europe. They were partly mixed with Latin elements, especially male names, fashionable among the inhabitants of Gaul. All of them follow the Late Latin phonetic changes that lead to Langue d'oïl.

Almost all the main cities kept a Romanized Celtic name, that gave birth to the modern toponym :

In the following examples the original Gaulish toponym was replaced by the name of the tribe according to a well-known process in the Late Empire.

Some of these disappear to be later replaced by Normanic names such as Coriovallum / Cherbourg or Caracotinum / Harfleur. It shows that the old inhabitants who used it were expelled or flew away and were replaced by newcomers, or that they became only a small minority.

In other cases, we do not know the Pre-Normanic names of Honfleur or Dieppe for instance.

The most common suffix in northern France is -acum (written -acum or -aco in the Medieval Latin documents, but pronounced in vulgar Latin -acu) that means 'place of', 'property'. Its origin is Celtic *-āko (compare Breton -eg, Welsh -og, Irish -ach, same thing).

The result of its evolution and way of spelling can be -ay, -ai, -ey, -é or -y in northern France and Belgium. We can find all of them in Normandy.

The preceeding element is sometimes another Celtic substantive, which cannot always be clearly identified or translated, because Old Celtic is ill-known. There are common archetypes like :

These exist everywhere in the Langue d'oïl extension area. In other regions of France and countries of Europe, they can exist with another phonetics.

However, the latest -acum formations are combined with a Christian or a Germanic masculine name : Repentigny (*REPENTINIACU with Repentinius, Christian name). The most common -acum place-name in Normandy is Glatigny (More than 40 Glatigny, Glatiney, from *GLATTINIACU, Germanic name *Glatto). In the late creation, it is more difficult to make the difference between the suffix and the root : *GLATTINIACU can be interpreted as *Glattini-acu or as *Glatt-iniacu, because *-INIACU became finally a suffix.

These come from Vulgar Latin, but began only to extend about 100 years after the fall of the Roman Empire in the 6th century AD. In this Province, it is sometimes quite difficult to know if these place name formations are Pre-Normanic or Normanic, because of the similarities between the earlier creations and the later creations.

The main romance appellatives are the following :

In France (including Normandy), the extension of -court, -ville and -mesnil (other spellings -maisnil, -ménil) corresponds generally to the Frankish and other Germanic settlements (and Anglo-Scandinavian in Normandy). That is probably the reason why the common word order is from Germanic : determinative (adjective, appellative or owner's name) + (determined) romance element, for instance : Neuville 'new village', Bourville (Bodardi villa 715) 'Bodard's farm', Harcourt (Normannus de Herolcurt 1030 - 1035) 'Herulf's farm', Attemesnil (Ademesnil 1260) 'Adda's property', etc. It is called formula A.[7] Less than 1/3 of France is entirely contained in the formula A extension area (the north).

The word order in Vulgar Latin is the opposite (the same evolution as in Celtic). Romance appellative + adjective, determining name or person's name is the dominating formula in the Occitan French toponymy and in western France. It is called formula B.[8] Instead of Neuville, we find Villeneuve further to the south, that can be a translation from Occitan Vielanova too, or sometimes a modern name. The same for Neuchâtel, Neufchâtel,[9] Neufchâteau 'new castle', further to the south Châteauneuf, Châtelneuf, can also be a translation of Castelnau (Occitan). In Normandy, the only pays to be included totally in formula B zone is Avranchin (southwest).

However, these comments need to be qualified : -ville (as second element) extended outside the formula A zone to Avranchin, to Beauce and to the south west of France (obviously, without mentioning the very modern -ville combinations everywhere in France). On the contrary, mesnil-, mont- or val- are used as first element (according to the formula B system) in the formula A zone to the north, in the later medieval toponymic creations.

In the Norman toponymy, the most widespread appellative is -ville (Ville- in Avranchin, South West) and we estimate up to 20% the number of Norman communes ending with -ville. The oldest recorded one (in an ancient Latin written document) is Bourville in 715 and we suppose -ville was used massively until the 11th. In contrast to -court that is the less common one (compare to neighbouring Picardy).

-court is usually combined with a Germanic masculine name : Hébécourt, with Haribertus > Herbert ; Norman surname Hébert or Sébécourt, with Sigibertus > Norman and Picard surname Sébert. It almost never appears as a suffix in the western part of Normandy, but as a prefix according the combination mode formula B  : Cour-, Gour-, Col-, Coul-. For instance : Gourfaleur (Courfalor 1250, *falor, name of a people), Coulvain (Laipwin 's "court"), Coulimer (Lietmar 's "court"), etc.

François de Beaurepaire observes that the -court, Cour- were never used with an anglo-scandinavian male's name or element. He concludes they were no more usual in the local language at the end of the 9th C. when the first Norsemen settled. We can add, that the extension of the formula A to the west except Avranchin (where otherwise the anglo-scandinavian place names are rare) is probably due to the Saxon settlements in Otlinga Saxonia around the 5th C. AD, followed later by the Anglo-Scandinavian settlements.

Another common one is -mesnil / Mesnil- (written ménil in the Orne département as a result of a local political decision). They are mainly combined with a masculine anthroponym like the -ville place-names. The late formations are always built according to the formula B mode, for example : Mesnil-Hermant, Mesnil-Esnard, etc.

The list of the romance appellatives does not mention -bosc / Bosc- 'wood', because it is typically Norman. It corresponds to the French word bois, that was never used this way and with such an extension in the general French toponymy. The spelling bosc (sometimes -bos(c)q or Bos- / Boc-), pronounced [bo:] or [bɔk], is specific for this Province. Despite the fact that the word bosc exists in the Occitan language (pronounced [bɔsk]), its extension in the southern French toponymy is very limited.

Old Norse and Old English settlement names began with the Norse settlement at the end of the 9th century and particularly in the 10th with the creation of a Norman state by Rollo in 911. The speakers of Old Norse were linguistically assimilated into Francophone society within a few generations, so these settlement names can probably be dated before the 11th century. Most settlers and colonists of the 9th and 10th centuries were probably from the Danelaw and could be Danish, Norwegian, or Anglo-Saxon. These languages were quite similar to each other and it is consequently sometimes difficult to make the difference between them, concerning the origin of the appellatives and male's names.

It is the most common suffix of Old Norse origin. There are more than 300 places ending with -tot in Normandy. Its root is Old Norse topt (compare English -toft, Danish -toft) 'site of a house'. It can be used alone in the late formations of the 11th century : le Tot.

It can be found alone le Bec, in the late creations like le Tot.

ON or OE haga 'enclosure'

The word homme is written like the French word homme 'man', but the pronunciation is different : French [ɔm] 'man' (the man = l'homme) / Norman [χɔm] or [hɔm] "holm" (the holm = le homme)

The use of -beuf / -bot corresponds to -by in GB. It explains the similar formations on both sides of the English Channel :

From ON vella and OE wella

Vannecrocq (Wanescrotum 11th c., cf. Walshcroft, GB), Bec-de-Croc (Bethecroth 11th c.). The spelling -C or -CQ is the result of a confusion with French croc 'fang', 'tooth'. final -C and -T are not being pronounced in French since the Middle Ages.

The spelling /r/, the additional final -R, is due to an "official" correctism. -fleu was believed to be the local and popular pronunciation for fleur 'flower'.