Ouistreham is a commune in the Calvados department' in the Basse-Normandie region in northwestern France.

Ouistreham is a small port with fishing boats, leisure craft and a ferry-harbour. It serves as the port of the city of Caen. The town is about the mouth of the Canal de Caen à la Mer.

The name Ouistreham derives from ouistre - 'oyster' and Saxon ham= 'village'. It has been a trading port since the Middle Ages. The harbour is now a part of "Port de Caen-Ouistreham". Ouistreham is pronounced Wee-ss-tram.

Since the beginning of the 20th century, it is a bathing beach on the "Riva Bella".

On 6 June 1944, No. 4 Commando landed at Ouistreham (Sword Beach) and fought their way to Pegasus Bridge, with the 177 Free French of the No. 10 (Inter-Allied) Commando given the honour of spearheading the advance.[1] The assault on Ouistreham was featured in the movie The Longest Day, although the film location for Ouistreham was actually at Port-en-Bessin. 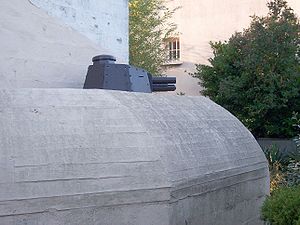 German battery in Ouistreham, fitted with the turret of a Renault FT-17 tank.

The port of Ouistreham has a scheduled cross-Channel ferry service to Portsmouth, operated by Brittany Ferries.

Ouistreham is twinned with the West Sussex village of Angmering in England; also with Braine-l'Alleud in Belgium, and Lohr am Main in Germany.