Bistrița
This article is about a city in Romania. For other uses, see Bistrița (disambiguation).

The earliest sign of settlement in the area of Bistriţa is in Neolithic remains. The Turkic Pechenegs settled the area in 12th century following attack from Cumans. The native Hungarians called these Turkic settlers "Besenyő" and gave them the district centered on Beszterce. Transylvanian Saxons settled the area in 1206 and called the region "Nösnerland". The destruction of Markt Nosa ("Market Nösen") under the Mongols of central Europe is described in a document from 1241. Situated on several trade routes, Bistritz became a flourishing medieval trading post. The town was named after the Bistriţa River, whose name comes from the Slavic word bystrica meaning "fast-moving water".

Beszterce became a free royal town in 1330. In 1353 it gained the right to organize an annual 15-day fair, as well as a seal containing the coat of arms of an ostrich with a horseshoe in its beak. In 1465, the city's fortifications had 18 defensive towers and bastions defended by the local guilds. It was also defended by a Kirchenburg, or fortified church. The town was badly damaged by fire five times between 1836 and 1850.[2]

The city became part of Romania after 1919, reverting briefly to Hungarian control between 1940 and 1944 and being reintegrated into Romania after World War II.

According to the last census, from 2002, there were 81,259 people living within the city of Bistriţa,[3] making it the 30th largest city in Romania. The ethnic makeup is as follows: 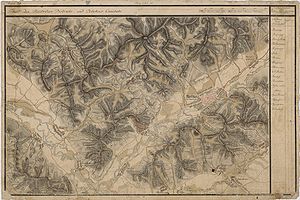 The main attraction of Bistriţa's central square is the Lutheran church, which was built by the Transylvanian Saxons and originally constructed in the 14th century in Gothic style but later remodeled between 1559–1563 by Petrus Italus with Renaissance features. It was renovated in 1998.

On June 11, 2008, the tower and roof of the church caught fire when three children who went to steal copper set it on fire while playing.[4] The main part of the church suffered just a little damage and is not in much danger, the interior being intact. It is speculated that both bells residing in the tower (one dating from the 15th century, the other from the 17th) might have melted.

The church suffered from fire in 1857, when the tower's roof and the bells were destroyed. The roof was rebuilt after several years.

In Bram Stoker's novel Dracula, the character Jonathan Harker visits Bistriţa and stays at the Golden Krone Hotel (Romanian: Coroana de Aur). Although no such hotel existed when the novel was written, a hotel of the same name has since been built for tourists.

In the PlayStation 2 game Shadow Hearts, Bistriţa (where it is spelled "Biztritz") was a major place and home to the role-playing character Keith Valentine.

The major cities directly linked by trains to this city are Bucharest via a night train, and Cluj-Napoca via several trains. Access from Bistriţa to major railway lines is generally through connections in Dej or Beclean pe Someş, although some other trains stop at the nearby railway junction of Sărăţel.

Bistriţa also serves as a midway point for C&I, a transport service, and is a changing point for people traveling between Suceava, Satu Mare, Cluj-Napoca, Sibiu, Sighişoara, Târgu Mureş, and Braşov.

Nearest airport is Cluj-Napoca Airport, which is located 110 km. from Bistriţa.

This article incorporates information from the revision as of 11 January 2007 of the equivalent article on the German Wikipedia.