Unfinished Business is the second collaboration album between R&B artist R. Kelly and rapper Jay-Z and was released worldwide on October 26, 2004. It was distributed in the United States and Canada by Jive Records and Island Def Jam Music Group, by the Bertelsmann Music Group (BMG) and its subsidiary Jive Records, except in Canada and the United States of America where Island Def Jam Music Group and its labels Def Jam Recordings and Roc-A-Fella Records replaced BMG. The album was composed of unreleased tracks from the recording sessions of 2002's The Best of Both Worlds,[1] although slight additions were made.

Unfinished Business was promoted by the "Best of Both Worlds" concert tour with R. Kelly and Jay-Z performing songs from both their solo and joint albums. Two singles, "Big Chips" and "Don’t Let Me Die", were sent to radio stations,[1] but only the former saw a physical release.

Unfinished Business debuted at number one on the U.S. Billboard 200 chart amid controversy and criticism.[2] Like its predecessor, it was criticized for repetitive lyrics. The "Best of Both Worlds" tour filled with tension and accusations that boiled over at an October 31 show where R. Kelly was accused of erratic behavior and was pepper sprayed by a Jay-Z associate. Jay-Z and the tour promoter then banned R. Kelly from the tour claiming "lack of professionalism". R. Kelly responded by suing his co-act and touring company for $75 million for breach of contract, among other things, on November 2.[1][3] Unfinished Business was certified platinum by the Recording Industry Association of America (RIAA) on December 1.[4]

R. Kelly appeared on Jay-Z's "Guilty Until Proven Innocent". In 2001, Jay-Z was featured on R. Kelly's popular single "Fiesta Remix" that shot up to fifth on the Billboard Top 100. The positive reception to both songs opened dialog between the two for a possible joint album. In December 2001, R. Kelly confirmed the album's existence and name in an interview with MTV at that year's Billboard Music Awards.[5] In January 2002, the two announced Best of Both Worlds in a New York City news conference.[6][7]. When the album was leaked on February 22,[8] the release date was moved up seven days to combat piracy.[9] Outside parties speculated that the album would be the biggest release of the year and easily sell multi-million. However in February 2002, an unknown person sent a sex tape to the Chicago Sun-Times newspaper, claiming that it was R. Kelly and an underage female.[10] This would be illegal under Illinois law, which states that adults cannot have sexual intercourse with a minor. R. Kelly denied the claims.[11] In response to the public outrage, Def Jam cut all promotion plans of the album, including music videos and the planned tour. Jay-Z also refused to appear with R. Kelly in anything.[12]

Best of Both Worlds was criticized by critics for uninspired and recycled song meanings. It debuted number–two on the Billboard 200 with 223,000 units scanned.[13] Despite the lack of promotion, it was still considered a commercial failure; the total was less than half as the artists' last solo efforts. Jay-Z's The Blueprint and R. Kelly's TP-2.com sold 427,000 and 543,000 respectively in their debut week and debuted number–one. If any chances of doing a tour lingered, they were crushed in June when R. Kelly was arrested for 21 counts of child pornography after witnesses claimed the woman in the video was 14 years old.[14] He was later acquitted of all charges in 2008.[15]

In November 2003, R. Kelly appeared at Jay-Z's "farewell" concert that was featured in the 2004 documentary film Fade to Black. The response from the crowd led to two to reconsider the idea of touring again, noting how R. Kelly's studio album that year, Chocolate Factory was certified multi-platinum by the RIAA. After watching Kelly get back on top, keep his fanbase, and go platinum in only 3 weeks, Jay-Z and Def Jam jumped back on the bandwagon. On September 21, Unfinished Business was confirmed.[1][16]

As the album is composed of unreleased tracks of R. Kelly and Jay-Z, the recording took place during the Best of Both Worlds recording sessions. The two never met in a studio, instead sending tracks to each other to finish. Jay-Z described the process in their Best of Both Worlds press conference.

"It was definitely a friendly competition. He'd send me something and I'd be like, 'Oh, he killed that. Now I've got to kill it, too.' And every time I sent him something, he'd be like, 'Maaaannnn. All you've got to do is rap. I've got to put it in perfect pitch and harmony and still be saying something. You're putting pressure on me."[6]

R. Kelly in a 2001 MTV interview stated that they had recorded nine songs by December 10.[5] Album producers Tone and Poke also made sure the songs moved along.

The album generated mundane feedback from critics criticized the album for having the same theme as their previous outting and accused both artists of a cheap cash–in to promote their tour. Jon Caramanica of the Rolling Stone criticized Jay-Z's raps as boring.[17] Rapreview.com's Steve Juon judged the album as a tolerable release, saying "this time R. Kelly's peanut butter R&B is actually de-emphasized a little in favor of Jay-Z's hip-hop chocolate. That's fine by me, because it tastes better that way. Not as good as an unrestrained and unfettered Jay-Z does by himself mind you, but it's an improvement."[18]

Best of Both Worlds tour

Not to be confused with Best of Both Worlds Tour.

The Best of Both Worlds Tour was a United States-only, 40-city tour to promote Unfinished Business, headlined by R. Kelly and Jay-Z. Artists affiliated with Roc-A-Fella performed with Jay-Z during his solo sets. It was sponsored by Atlanta Worldwide Touring.[19] The tour was originally planned for 2002, but was scrapped after the R. Kelly accusations surfaced. It was originally announced on August 19, 2004,[20][21] with initial tour dates coming on August 27.[22] The remaining shows were announced on October 6.[23] The concert was expected to gross $30 million.

Although the concert was well-received by critics, they noticed tension between R. Kelly and Jay-Z. The two only performed together on stage for the beginning and finale sets. Sean Daly of the Washington Post wrote on their interactions, "Did any of it look remotely genuine? Absolutely not. How about "As the Best of Both Worlds Turn?".[24]

The concert begun with a video depicting a news report high-speed police chase of two buses heading to the arena. At the climax, the arena is darkened and the two vehicles crash and break a faux-wall on the stage. From there, R. Kelly and Jay-Z exit their respective vehicles clad in white suits and perform "The Best of Both Worlds", "Shake Ya Body", "Take You Home With Me A.K.A. Body," and "Somebody's Girl" from the Best of Both Worlds album. R. Kelly then goes backstage while Jay-Z and his entourage perform their set. From there, the two transition with 10 to 20 minute sets consisting of their songs. After about five, they then conclude with the songs "Fiesta Remix", "Big Chips" and "Hell Yeah".

During the first Rosemont concert, R. Kelly ran a skit that made light of his court case.[26][27] Due to national outrage, he removed the act from the second concert. For reasons both Jay-Z and R. Kelly dispute, he was more than two hours late for the next day's concert that ended at 1 AM and to make matters worse, R. Kelly left before the final joint set. The tour was unable to make it to Cincinnati, Ohio for the next concert and therefore canceled it.[26] On October 17, Jay-Z left early to attend to an emergency, but was later seen at the R&B singer Usher's birthday party. R. Kelly stopped his set midway through the October 23 St. Louis concert for difficulty with the lighting.[25] The Milwaukee and Hartford shows were canceled for technical difficulties.

The tension boiled over in New York City's Madison Square Garden on Friday, October 29 when R. Kelly told the audience that two men were showing their guns to him.[3][28][29][30] Although various media reports dispute the actual time of the disturbance, it is presumed to be near the beginning to an hour into R. Kelly's set. Madison Square Garden security then searched the area but found nothing and gave clearance for R. Kelly and his bodyguards to return.[30] On their walk back, they were suddenly pepper-sprayed by Tyran "Ty Ty" Smith, a childhood friend of Jay-Z and rushed to nearby Saint Vincent's Catholic Medical Center. By this time Jay-Z was performing onstage in place of R, Kelly, unaware of the backstage violence. After a forty-five minute set, he told the crowd he would have a show for them in a few minutes.[30] Jay-Z returned with several musicians in the crowd Usher, Mary J. Blige, and rappers Foxy Brown, Ja Rule, T.I., , P. Diddy and his Roc-A-Fella entourage.

Following the show, both Jay-Z and R. Kelly interviewed separately with New York City radio station WQHT personality Angie Martinez. Jay-Z mocked R. Kelly's claims of a gun in the audience, saying, ""That's Madison Square Garden. You cannot get a gun in Madison Square Garden. Does he know where he's at?"[30] He also confirmed the rumors of their strained relationship and called R. Kelly insecure about his louder reception at concerts and over-concerned about stage lighting.[28][30] Although R. Kelly confessed that he had not actually seen any guns, he was cautious after a threatening phone call earlier Friday.[30] He also expressed his desire to perform at Saturday's show.[30] The next day Madison Square Garden banned R. Kelly and his group from that night's show and Atlanta Worldwide Touring banned R. Kelly from the rest of the tour, which was renamed Jay-Z and Friends.[29]

After a statement detailing his disappointment of being barred, R. Kelly sued Jay-Z, his production company Marcy Projects and Atlantic Worldwide on the next day (November 1) for breach of contract and $75 million in damages($60 million in punitive damages and $15 million for lost income) as a result of not being able to tour.[3] The suit alleged that lighting problems caused by Jay-Z's production staff had been plaguing his performances since rehearsals in September and had to resort to fixing them himself or hiring a professional. It also accused Jay-Z of being jealous of the 60/40 split R. Kelly had over the tour gross and thus conspired the events that occurred at Madison Square Garden pressured Atlantic Worldwide to remove him.[3]

Jay-Z counter sued in January 2005, claiming R. Kelly showed erratic behavior that included: being periodically late or absent from meetings and rehearsals, missing deadlines for material and sudden demands and requests that led to several concert delays and cancellations that resulted in loss of gross. R. Kelly's lawyers challenged it as "inaccurate smears of Mr. Kelly that are utterly irrelevant to the issues of the case".[31] They further claimed it didn't deny that the rapper refused to work with R. Kelly after the Madison Square Garden incident and thus broke the contract.[31] It was ultimately thrown out by a judge in May 2005, who agreed.[32]

These niggas givin' out cases like a liquor store
Runnin' to the DA tryin' to get me for it
All the money it made, I'm like forget the law
I'm not 'fr-iz-aid, it J-iz-ay homie you got pl-iz-ayed
Take it like a man, the flow ran you off the st-iz-age (go sit down)
Wastin' ya time tryin' to sue S. tell ya lawyer
Take that civil case and drop it like it's hot

Ty Ty Smith was arrested and charged with third-degree assault, which carried one year of prison, on November 12 for the pepper-spraying incident.[34] In November 2005, R. Kelly filed another lawsuit against Jay-Z, claiming Smith was awarded with vice president of Def Jam's artist and repertoire.[35] Regardless, he pleaded guilty to disorderly conduct in 2006 in a plea deal that contained no jail time.[36] 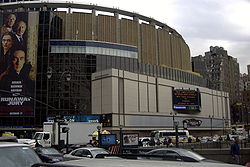 The exterior of Madison Square Garden, where the last show took place on October 30.