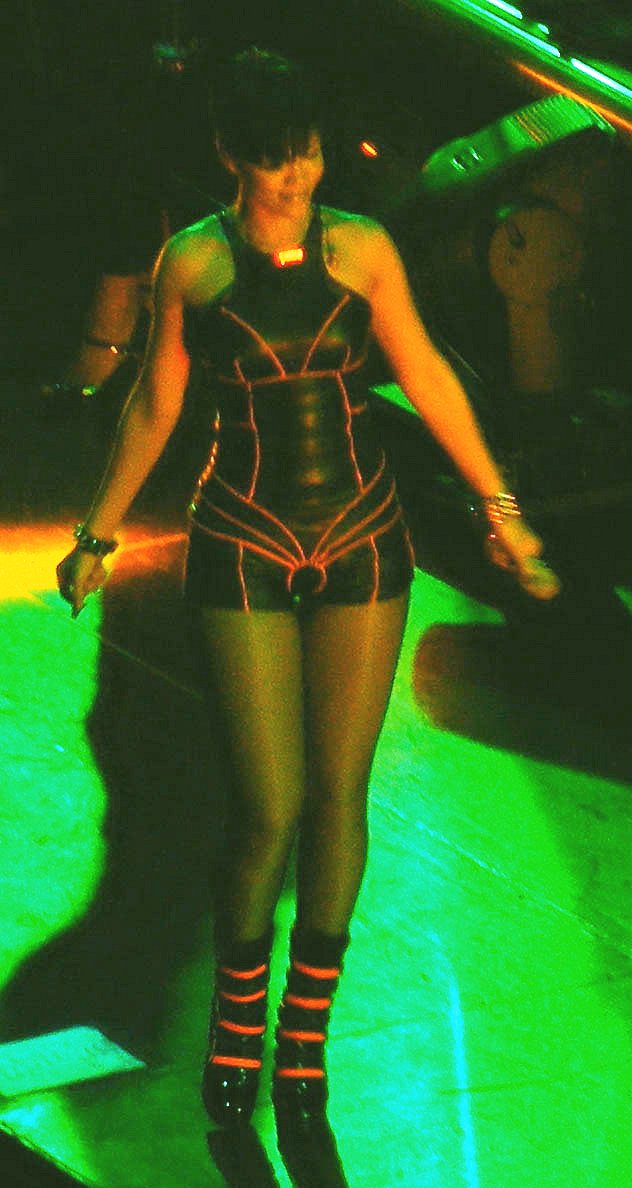 Rihanna came to fame in 2005 with the release of her debut album "", which featured her breakthrough single "". Less than a year later, Rihanna released "A Girl Like Me" and gave her first number one single, "SOS". In 2007, Rihanna released her third studio album, "". The album has yielded six hit singles including three worldwide number one singles including "Umbrella", "Don't Stop the Music" and "Take A Bow". Since the release of her debut album, Rihanna has amassed twelve top 40 hit singles in the U.S. [ [http://www.allmusic.com/cg/amg.dll?p=amg&searchlink=RIHANNA&sql=11:3ifyxqesldae~T51 allmusic ((( Rihanna > Charts & Awards > Billboard Singles ))) ] ]

Rihanna was born in to Ronald Fenty and Monica Fenty. She has two younger brothers, Rorrey and Rajad Fenty.

Rihanna went to Charles F. Broome Memorial School, a primary school in Barbados, and then on to the Combermere School, where she formed a musical trio with two of her classmates. In 2004, she won the Miss Combermere Beauty Pageant and performed in the Colours of Combermere School Show.

In 2003, at the age of 15, Rihanna received her big break when one of her friends introduced her to Evan Rogers, who was vacationing in Barbados with his wife. Rogers, along with his partner, Carl Sturken, helped Rihanna record material in the U.S. which was sent to various recording companies. One copy of Rihanna's work was sent to , who eventually signed her to .

The second single "" was less successful than "", but it became a hit nonetheless by managing to achieve a top 40 charting in the USA reaching a high of number 36. In Australia, and the single proved to be well-received reaching the top 10 in those countries. Overall the single became a top 40 hit on 11 charts around the globe. Despite the album not having huge promotion and only releasing two singles "" managed to sell over 500,000 copies in the United States and 2 million worldwide.

Rihanna second album, "A Girl Like Me", was released in April 2006; less than eight months after the release of her first album. The lead single, "SOS", was used in an endorsement deal with Nike. The song became Rihanna's first number-one on the Billboard Hot 100 chart; it also debuted at number one on the chart. "SOS" peaked at number one in Australia and number two in the UK. The second single, entitled "Unfaithful", was written by R&B singer . The song became her third top ten hit in the U.S. and in the UK. The third single, "", wasn't as successful as her previous releases, failing to chart on the U.S. Billboard Hot 100, however, it became her fifth UK top 20 single, where it peaked at number 17 on that chart and peaked at number one on the U.S. chart. Rihanna's fourth single from the album, "" featuring , had already climbed to number 45 on the "Billboard" Hot 100 based solely on airplay. It was released as a digital download on February 19, 2007, which made the song jump from number fifty-two to number ten and then eventually peak at number nine. "A Girl like Me"'s sales were significantly stronger, selling over 1 million in the U.S and over 3.5 million worldwide.

In total, Rihanna has had eleven number-ones on the "Billboard" charts and has had major success on the Hot Dance Club Play chart with four number-ones ("", "SOS", "Unfaithful", and ""). When Rihanna received an endorsement deal from , she recorded a song written by entitled "Just Be Happy" as part of the deal to promote their Happy fragrance. Rihanna also recorded a song called "" with Pussycat Doll for P&G’s female deodorant Secret.

During this time Rihanna also made her acting debut in a cameo role in "", which was released on August 8, 2006.

Rihanna went into the studio in early 2007 with , Stargate, and among others to record her third album, "". The album was released on June 5, 2007, features and . Rihanna worked with on three songs in the album. co-wrote and provides background vocals on "Rehab". [ [http://www.mtv.com/news/articles/1558496/20070501/rihanna.jhtml Rihanna Loses Good Girl Image, Thanks to Jay-Z, Justin, Timbaland, Ne-Yo] ]

The album so far has yielded five hit singles, including the world-wide number one hit "Umbrella", featuring . In addition to reaching number one in various countries, "Umbrella" was the number one single in the UK for 10 consecutive weeks, making it the longest running UK number one single since 's single "", back in 1994, and the longest running number one by a female artist since 's "I Will Always Love You", which also topped the chart for 10 weeks in 1992. By the end of the year, "Umbrella" was ranked second on the year-end chart in the United States. [ [http://www.billboard.com/bbcom/yearend/2007/charts/hot100.html Billboard 2007 Year In Music ] ]

Her other singles, "Shut Up and Drive" and "Don't Stop The Music" were able to mirror the success of "Umbrella", with "Don't Stop the Music" reaching number three on the , becoming Rihanna's seventh top ten single and her fourth top five hit, while peaking at number one in various countries. The fourth single (third single in the US and UK) "", featuring , was able to peak at number seven in the U.S.

Starting September 12, 2007, Rihanna toured Canada and the United States in support of the album with several shows and then crossed to . The tour was called called the "Good Girl Gone Bad Tour", and was released on DVD on June 17, 2008, featuring the show performed at the on December 6, 2007.

"Good Girl Gone Bad: Reloaded" also includes Rihanna's duet with , "" and "Disturbia". "If I Never See Your Face Again" did not get the success it was expected to get in the US, peaking at #51. It did perform better in other countries, mostly charting in the top 20. "Disturbia" was another huge success, giving Rihanna her fourth number one single and her ninth top ten hit in the US. It reached #3 in the UK and charted in the top 10 in several countries. The eighth single, "Rehab" featuring , is set to be sent to radio stations October 7, 2008. [ [http://www.allaccess.com/] ]

On October 4th, 2008, in an interview with , Rihanna confirmed that she is currently in the studio working on her fourth studio album. She stated that, "I'm currently working on record number four and I'm having so much fun. I'm having so many new experiences and meeting so many new people, it's amazing". Rihanna also stated that the album will head in a more Techno Rock direction saying, "I want this album to head in the same direction as "Good Girl Gone Bad" but with even more edge. The tracks will be less R&B influenced and will have a feel closer to that of, "Disturbia", "Shut Up and Drive" and "Breakin' Dishes". Rihanna also stated that she will be writing 3 tracks of the album herself and that they are quite different from her previous work and also stated that one of the tracks will fit into the punk-rock category". A release date for the album has not yet been announced. [http://www.mtv.com/music/artist/rihanna/news.jhtml All Music]

Rihanna has five "" Hot 100 number ones hits both as a lead artist thus far ("SOS", "Umbrella", "Take a Bow", and "Disturbia"), as well as 's "", on which she is featured. This makes her the artist with the most number ones this decade. The Good Girl Gone Bad album has three number one singles. She has so far sold approximately 11 million albums worldwide.

Rihanna has teamed up with and other celebrities like and for "Fashion against ". The collection is designed to spread awareness about /. It was released at in early February 2008. [ [http://www.popcrunch.com/good-charlotte-rihanna-h-celebrities-team-with-hm-for-fashion-against-aids-clothing-line/ Good Charlotte, Rihanna H&M AIDS Charity Fashion Line; Celebrities Team With H&M For “Fashion Against AIDS” Clothing Line ] ] She went on the with , , and [ [http://www.mtv.com/news/articles/1580653/20080130/west_kanye.jhtml Kanye West's Glow In The Dark Tour Will Feature Rihanna, Lupe Fiasco, N.E.R.D.] ]

There are conflicting reports about her next album. MTV.com reported that Rihanna has now gone into the studio to start recording her fourth album, [ [http://www.mtv.com/news/articles/1580653/20080130/west_kanye.jhtml Kanye West Nabs Rihanna, Lupe Fiasco For Upcoming Tour - News Story Music, Celebrity, Artist News | MTV News ] ] but on the show Rihanna said "I am not in the studio yet, Not yet no, We're not gonna have an album out this year, probably the top of next year in 2009." Fact|date=March 2008 In the near future, Rihanna is scheduled to work with who named her as 'The Next Britney'. [ [http://ultimate - rihanna.com/2008/03/21/news/tedder-rihanna-is-the-next-britney/#comments RYAN TEDDER: ‘RIHANNA IS THE NEXT BRITNEY’ as a compliement. Ultimate Rihanna - Rihanna Fenty Fan Site ] ] Rihanna will be a godmother of the eight season of Star Academy France. [ [http://worldofrihanna.com/2008/07/28/rihanna-star-academy-france/ French magazine “Tele Loisirs” has just announced that Rihanna and Christophe Mae would be godparents of the eight season of Star Academy France.] ]

Rihanna created her Believe Foundation [ [http://www.believerihanna.com The Believe Foundation - founded by Rihanna ] ] in 2006 to help terminally ill children. Rihanna has performed a number of concerts to raise funds for both charities and the Foundation. She is also a 2008 Cartier LOVECHARITY Bracelet Ambassador, performed at Madonna’s fundraiser, and was lauded for her efforts to help a woman find a bone marrow donor. [ [http://www.contactmusic.com/news.nsf/article/rihanna%20fights%20to%20save%20cancer-stricken%20mum_1060479 Rihanna - Rihanna Fights To Save Cancer-Stricken Mum ] ]

In September 2008, Rihanna joined other female pop/rock singers such as , , and Fergie for the anti-cancer campaign "" and its theme song, "". The single is now available via .