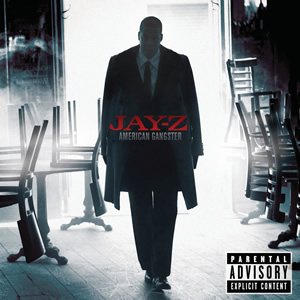 
"American Gangster" is the tenth by American . It was released on November 6, 2007 in the United States via the record labels and . "American Gangster" is Jay-Z's first , which was inspired by the film of the same name. The album features production from Diddy & The Hitmen, , and , among others. Guest appearances include , , and . Jay-Z released version of the album on his birthday, December 4, 2007.

Music critics praised "American Gangster", and noted that Jay-Z was trying more "complex lyrics". The album was released to significant commercial success, despite being pulled from the , selling 425,861 copies in its first week and debuting at number one on the "Billboard" 200, tying for the second most number one albums. The "" magazine named "American Gangster" the third best album of 2007. [Robert Christgau, David Fricke, Christian Hoard and Rob Sheffield (December 17, 2007). [http://www.rollingstone.com/news/story/17601851/the_top_50_albums_of_2007/2 The Top 50 Albums of 2007] . "". Accessed December 19, 2007.]

Jay-Z originally stated he recorded nine tracks for the album,

On November 9, 2007, Jay-Z appeared on the "" to discuss the album. [YouTube|nzmAav8yCkI|Charlie Rose - Jay - Z. Accessed November 8, 2007.] When asked about how the film gave life to this album, he replied: quote|It's a New York City tale, you know. So as soon as the movie came on, it was like familiar, things that my pop seen and my uncles seen and, you know, different things like that, things I've seen growing up. So they resonated with me in a way, the story, as well as, I mean, even though everything happens, you know, the way it turns out, you know, it's one of those movies that where you champion the bad guy, because the bad guy, you know, he don't seem like a bad guy, and the good guy — I mean the good guys are bad. You know, that complex — the complexity of human beings in this thing was amazing to me. I loved the complexity of the human beings. [ [http://www.charlierose.com/shows/2007/11/09/1/a-conversation-with-rapper-and-entrepreneur-jay-z A conversation with rapper and entrepreneur Jay-Z] . "" (November 9, 2007). Accessed November 7, 2007.]

Jay-Z pulled "American Gangster" from the popular . Jay-Z stated "as movies are not sold scene by scene, this collection will not be sold as individual singles." However, the album is available for digital download, in its entirety, at Rocafella.com, and .

Jay-Z would have the film—"American Gangster"—playing on the monitors above the recording booth to keep him inspired. [Elliott Wilson (October 19, 2007). [http://www.xxlmag.com/online/?p=15128 Jay-Z: I'll Still Kill (Part I)] "XXL". Accessed December 2, 2007.] In an interview with producer LV from The Hitmen said:

says that "And that might be the most common complaint about the album — it's really just another case of Jay-Z being Jay-Z, albeit with different presentation. Unless you know each verse from "Reasonable Doubt" through "Kingdom Come", it might sound like he's dealing with no variation on well-worn themes, the exact same thoughts and emotions that make up older tracks about his past as a drug dealer — the rise, the arrogance, the conflictedness, the fall, and all stages in between."

reviewer Tom Breihan noted that "'No Hook' has some of the most complicated rhyme-patterns Jay has tried in years":

quote|Stay outta trouble, momma said, as momma sighed
Her fear her youngest son be a victim of homicide
But I gotta get you outta here momma, or I'mma die...inside.
|Jay-Z, "No Hook"

Although Jay-Z says "American Gangster" was inspired by the movie of the same name, he touches on the topics of censorship and the controversy: [Jokesta (November 8, 2007). [http://www.defsounds.com/articles/Jay_z_addresses_censoring_hip_hop_on_new_album_to_debut_with_10th_number_1_1 Jay Z Addresses Censoring Hip Hop On New Album, To Debut with 10th Number 1] . Def Sounds. Accessed November 19, 2007.]

quote|And if Al Sharpton is speaking for me
Somebody get him the word and tell him I don't approve
Tell him I'll remove the curses
If you tell me our schools gon' be perfect
When Jena 6 don't exist Tell him THAT's when I'll stop saying bitch—BIIITCH!
|Jay-Z, "Say Hello"

and are two of the few featured guest spots on the album, in which Sigel appears on the new version of "Ignorant Shit", and follower Lil Wayne joins Jay-Z on the -sampling "Hello Brooklyn 2.0".

provide production twice on the album, with the first single "Blue Magic" which is actually a bonus track, and the eighth track "I Know".

delivers one track for the album along with additional guitars by Artist/Producer Dean "F.R.E.A.K" Farmer, while is credited for a bonus track and the re-make of "Ignorant Shit".

Like Jay-Z's 2003 album "The Black Album", Jay-Z released an version of "American Gangster". Released in December 2007, the a cappella version of the CD caused a string of and mash-up albums by both fans and professional s/producers alike. Although none of the remix or mash-up albums have yet reached the public notoriety of "The Black Album"'s "", several versions of the CD have made their way into the mainstream.

Several of the notable "American Gangster" Remix albums are listed below:

"American Gangster" debuted at number one on the "Billboard" 200, and Top Rap Album charts selling 425,861 records in the United States its first week.