Constantine XI Palaiologos, latinized as Palaeologus (Greek: Κωνσταντίνος ΙΑ' Δραγάσης Παλαιολόγος (Serbian: Константин Палеолог Драгаш), Kōnstantinos XI Dragasēs Palaiologos; February 8, 1404[1][2] – May 29, 1453) was the last reigning Byzantine Emperor (and, as such, the last Roman Emperor)[3][4][5] from 1449 to his death as member of the Palaiologos dynasty. After his death in battle during the fall of Constantinople, he became a legendary figure in Greek folklore as the "Marble Emperor" who would awaken and recover the Empire and Constantinople from the Turks.[1][6] His death marked the final end of the Roman Empire, which had continued in the East for just under one thousand years (980 years) after the fall of the Western Roman Empire.[7]

Despot of the Morea

Constantine became the Despotes of the Morea (the medieval name for the Peloponnesus) in October 1443, ruling from the fortress and palace in Mistra. At the time, Mistra, a fortified town also called Sparta or Lacedaemon due to its proximity to the ancient city,[8] was a center of arts and culture rivalling Constantinople.

After establishing himself as the Despot, Constantine worked to strengthen the defence of the Morea, including reconstructing a wall across the Isthmus of Corinth called the "Hexamilion" (Six-mile-wall), after suggestion of the famous scholar and teacher of his, Plethon.[9]

In the summer of 1444, he launched an invasion of the Latin Duchy of Athens from the Morea, swiftly conquering Thebes and Athens and forcing its Florentine duke to pay him tribute. The Duchy was ruled by Nerio II Acciaioli, a vassal of the Ottoman Sultan.

The Turks, frustrated from the attempt of the Greeks to expand from the Morea into central Greece[10] started raising an invading army. Two years later, in the autumn 1446, Sultan Murad II who had come out of his retirement led an army of 50–60,000 soldiers into Greece to put an end to the pretensions of the Constantine.[11] His purpose was not to conquer Morea but to teach Greeks and their Despotes a punitive lesson.[11] Constantine and his brother Thomas braced for the attack at the Hexamilion, which the Ottoman army reached on November 27, 1446. While the wall could hold against medieval attacks, Sultan Murad used bombards to supplement the usual siege engines and scaling ladders, leaving the Hexamilion in ruins by December 10. Constantine and Thomas barely escaped, and Morea was invaded. This put an end to Constantine's attempt to expand his Despotate.

Constantine XI married twice: the first time on July 1, 1428 to Theodora Tocco, niece of Carlo I Tocco of Epirus, who died in November 1429; the second time to Caterina Gattilusio, daughter of Dorino of Lesbos, who also died, during childbirth, in 1442. He had no children by either marriage. After his coronation, in 1451, Constantine XI sent a commission under George Sphrantzes asking Mara Branković, daughter of the Serbian Despot Đurađ Branković and Byzantine princess Irene Kantakouzene, by then the widow of Murad II, to marry him (Maria had been allowed to return to her parents in Serbia after the death of Murad). The proposal was welcomed by her father Đurađ Branković, but it foundered on the objection of Maria herself who had vowed that "if God ever released her from the hands of the infidel she would lead a life of celibacy and chastity for the rest of her days".[12] Accordingly, the courtship failed and Sphrantzes took steps to arrange for a marriage with a princess either from Trebizond Empire or the Kingdom of Georgia. The choice eventually fell to an unnamed Georgian princess, daughter of George VIII. He started official negotiations with the Georgian king, who had sent an ambassador in Constantinople for that reason.[13] It was agreed that, next spring, Sphrantzes would sail for Georgia to bring the bride to Constantinople, but Constantine's plans were overtaken by the tragic events of 1453.[1] 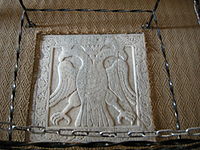 Marble relief of a double-headed eagle in the Church of St Demetrios in Mystras, marking the spot where Constantine XI was crowned.

Despite the foreign and domestic difficulties during his reign, which culminated in the fall of Constantinople and of the Byzantine Empire, contemporary sources generally speak respectfully of the Emperor Constantine. When his brother, Emperor John VIII Palaiologos, died childless, a dispute erupted between Constantine and his brother Demetrios Palaiologos over the throne. Demetrios drew support for his opposition to the union between the Orthodox and Catholic churches. The Empress Helena, acting as regent, supported Constantine. They appealed to the Ottoman Sultan Murad II to arbitrate the disagreement.

Murad opined upon Constantine and on 6 January 1449 Constantine was crowned in the cathedral at Mistra by the local bishop. It was rare but not unprecedented for an emperor to be crowned in a provincial city. The founder of the dynasty of Palaiologos had been crowned at Nicaea, Asia Minor, John Cantacuzene at Adrianople, Thrace. But they had been thought proper that a second coronation ceremony be held also at Constantinople, performed by the patriarch. Constantine was the exception. The patriarch at the time, Gregory III, was a unionist, (see East–West Schism) shunned by most of his clergy. Constantine knew that to receive his crown from Gregory would add fuel to the existing fires of religious discord in the capital.[14] He sailed from Greece on a Venetian ship arrived in Constantinople on 12 March 1449.[14]

Sultan Murad died in 1451, succeeded by his 19 year old son Mehmed II. Soon afterwards, Mehmed II began agitating for the conquest of Constantinople. Responded to this, Constantine threatened to release Prince Orhan, a pretender to the Ottoman throne, unless Mehmed met some of his demands. By this, Mehmed considered Constantine to have broken the truce and the following winter of 1451–52, Mehmed built Rumelihisari, a fortress on a hill at the European side of the Bosporus, just north of the city cutting the communication with the Black Sea to the east. This came in addition to the building of Anadoluhisarı, the fortress opposite of Rumelihisari on the Asian side, and gave the Ottomans absolute control over the sea traffic of the Bosporus Strait. For Constantine that was a clear prelude for a siege and immediately started organizing the defence.

He managed to raise funds to stockpile foods for the upcoming siege and to repair the old Theodosian walls, but the poor economics did not allow him to raise the necessary army to defend them against the massive Ottoman army. Desperate for any type of military assistance, Constantine XI appealed to the West reaffirming the union of Eastern and Roman Churches which had been signed at the Council of Florence, a condition the Catholic Church imposed before any help could be provided. The union had been overwhelmingly criticized by the strong anti-union ("anthenotiki") part of his subjects, while it dangerously estranged him from Loukas Notaras, his chief minister and military commander who was a leading anti-union figure. Finally, although some troops did arrive from the mercantile city states in the north of Italy, the Western contribution was negligible compared to the needs, given the Ottoman strength. Constantine also sought assistance from his brothers in Morea, but any help was forestalled by an Ottoman invasion of the peninsula in 1452 which took place exactly for that reason. The siege of the city began in the winter of 1452. Constantine faced the siege defending his 60,000 people city with 7,000 men, confronting an Ottoman army numbering many times that, backed by a state-of-art siege equipment provided by a very competent Hungarian gunfounder Orban.[15]

Fall of Constantinople and death

Before the beginning of the siege, Mehmed II made an offer to Constantine XI. In exchange for the surrender of Constantinople, the emperor's life would be spared and he would continue to rule in Mistra, to which, as preserved by G.Sphrantzes, Constantine's reply was:

To surrender the city to you is beyond my authority or anyone else's who lives in it, for all of us, after taking the mutual decision, shall die out of free will without sparing our lives.

He led the defence of the city and took an active part in the fighting alongside his troops in the land walls. At the same time, he used his diplomatic skills to maintain the necessary unity between the Genovese, Venetian and the Greek troops.

He died on 29 May 1453, the day the city fell. His last recorded words were: "The city is fallen and I am still alive",[16] and then he tore off his imperial ornaments as to let nothing to distinguish him from of any other soldier and led his remaining soldiers into a last charge where he was killed.[17]

Although it is alleged by some like Sphrantzes, who doubted the truth of the story that the only way the Emperor was later identified was by his purple boots and that his body was decapitated and his head sent across Asia Minor to legitimize the victory, others claim that the Turks were never able to identify his body, and that he was very likely buried in a mass grave alongside his soldiers.

A legend tells that when the Ottomans entered the city, an angel rescued the emperor, turned him into marble and placed him in a cave under the earth near the Golden Gate, where he waits to be brought to life again to conquer the city back for Christians.[18][19]

While serving as ambassador to Russia in February 1834, Ahmed Pasha presented Tsar Nicholas with a number of gifts, including a jewel-encrusted sword supposedly taken from Constantine XI's corpse.[20]

Constantine XI's legacy was used as a rallying cry for Greeks during their war for Independence with the Ottoman Empire. Today the Emperor is considered a national hero in Greece.

During the Balkan Wars and the Greco-Turkish War, under the influence of the Megali Idea, the name of the then-Greek king, Constantine, was used in Greece as a popular confirmation of the prophetic myth about the Marble King who would liberate Constantinople and recreate the lost Empire.

Constantine Palaiologos' legacy is still a popular theme in the Greek culture. The well known contemporary composers Apostolos Kaldaras and Stamatis Spanoudakis have written elegies for the Marble King.[21][22]

Some Eastern Orthodox and Greek-Catholics consider Constantine XI a saint (or a national martyr or ethnomartyr, Greek: ἐθνομάρτυρας). The Greek Orthodox Church, however, has never canonized him.