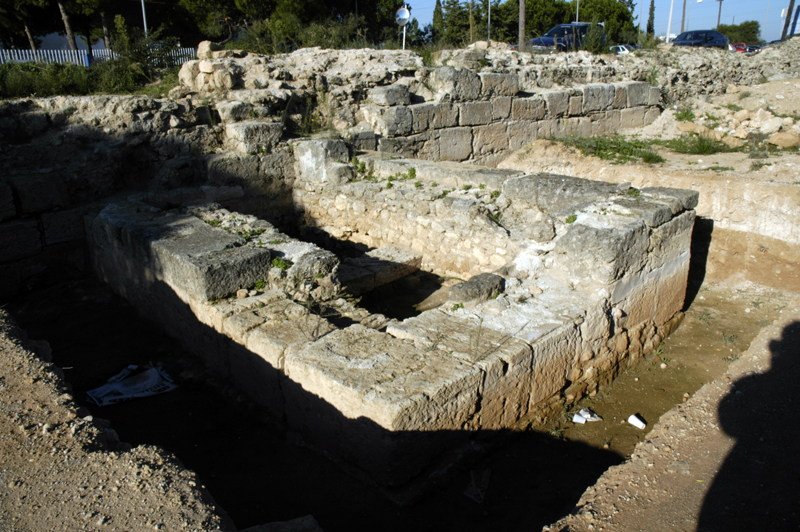 The "Hexamilion" stands at the end of a long series of attempts to fortify the Isthmus stretching back to perhaps the Mycenean period. [See Broneer and Wiseman for arguments for pre-Roman fortification walls across the Isthmus.] Many of the Peloponessos cities wanted to pull back and fortify the Isthmus instead of making a stand at when Xerxes invaded in (Herodotos Histories 7.206). The issue arose again before the (Herodotos 8.40, 49, 56). Although the concept of a fortress Peloponnese was repeatedly appealing, fortification of the Isthmus was of no utility without control of the ocean, as Herodotos notes (7.138).

The Hexamilion and its history

The wall was constructed in the period between CE and CE, in the reign of a during the time of the great into the . The attack of on Greece in CE or the sack of Rome in CE by the may have motivated the construction, which included towers, sea bastions, and at minimum one fortress. [Gregory uses numismatic evidence to date the construction to to CE.] The one known fortress contained two gates (north and south), of which the northern gate functioned as the formal entrance to the Peloponessos. [Gregory describes the development of this northern gateway from its origin as a 1st century CE Roman arch.] The wall was constructed with a rubble and mortar core faced with squared stones. It is not certain how long it took to complete, but the importance given to the task is apparent from the scale of the construction; the "Hexamilion" is the largest archaeological structure in Greece. Every structure in the region was cannibalized for stone for the effort, either being incorporated into the wall directly, as was the temple of Poseidon at , or being burned into lime, as was the sanctuary of Hera at Perachora as well as much of the ancient statuary of Corinth. In the reign of , the wall was fortified with additional towers, reaching a total number of 153. Military use appears to have fallen off after the CE, and by the 11th CE domestic structures were being built into the wall. In , the Byzantine emperor Manuel II personally supervised repairs over a period of forty days. The high cost of this effort caused unrest among the local elite. The wall was breached in by the Ottomans. Despot Constantine Palaiologos restored the wall again in 1444, but the Turks breached it again in 1446. After the Ottoman conquest of the Peloponnese in 1460, the wall was abandoned. During its history, the wall never succeeded in fulfilling the function for which it was constructed, unless it acted as a deterrent. Elements of the wall are preserved south of the and at the Sanctuary of Poseidon at Isthmia.

Secondary sources on the "Hexamilion"

* [http://isthmia.osu.edu/forthex.html Excavations on the Hexamilion, by the Ohio State University]