Despotate of Epirus
For other uses, see Epirus.

Although the Epirote state is usually termed the "Despotate of Epirus" and its rulers called Despots, this use is not strictly accurate.[1] The title "despot" was not even borne by all Epirote rulers. The state's founder, Michael I, never used it, and is only anachronistically referred to as "Despot of Epirus" in 14th-century Western sources. His successor Theodore did not use it either, and actually crowned himself Byzantine emperor at Thessalonica in ca. 1225. The first ruler of Epirus to receive the title of Despot was Michael II in the 1230s (from Manuel of Thessalonica), and then again, as a sign of submission and vassalage, from the Nicaean emperor John III Vatatzes.[2][3] Even after that however, speaking of the Epirote rulers as "Despots of Epirus" is technically incorrect,[4] since the title of Despot did not imply any specific territorial jurisdiction; it was merely the highest rank in the Byzantine court hierarchy, borne by close relatives to the reigning emperor, usually his sons. As a consequence, it was often borne by the princes sent to govern semi-autonomous appanages, and came to be associated later with these territories (aside from Epirus, the Despotate of the Morea is the most notable case). The term "Despotate" itself (in Greek despotaton) is not used in contemporary sources for Epirus until 1342.[5] 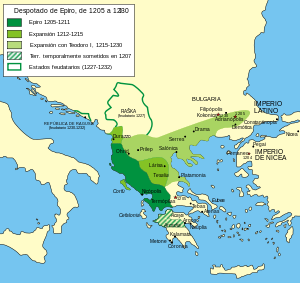 The Epirote state was founded in 1205 by Michael Komnenos Doukas, a cousin of the Byzantine emperors Isaac II Angelos and Alexios III Angelos. At first, Michael allied with Boniface of Montferrat, but having lost the Morea (Peloponnese) to the Franks at the battle of the Olive Grove of Koundouros, he went to Epirus, where he considered himself the Byzantine governor of the old province of Nicopolis and revolted against Boniface. Epirus soon became the new home of many Greek refugees from Constantinople, Thessaly, and the Peloponnese, and Michael was described as a second Noah, rescuing men from the Latin flood. John X Kamateros, the Patriarch of Constantinople, did not consider him a legitimate successor and instead joined Theodore I Laskaris in Nicaea; Michael instead recognized the authority of Pope Innocent III over Epirus, cutting ties to the Eastern Orthodox Church.

Henry of Flanders demanded that Michael submit to the Latin Empire, which he did, at least nominally, by allowing his daughter to marry Henry's brother Eustace in 1209. Michael did not honour this alliance, assuming that mountainous Epirus would be mostly impenetrable by any Latins with whom he made and broke alliances. Meanwhile, Boniface's relatives from Montferrat made claims to Epirus as well, and in 1210 Michael allied with the Venetians and attacked Boniface's Kingdom of Thessalonica. Michael was excessively cruel to his prisoners, in some cases crucifying Latin priests.[citation needed] Pope Innocent III excommunicated him in response. Henry forced Michael into a renewed nominal alliance later that year.

Michael however turned his attention to capturing other strategically important Latin-held towns, including Larissa and Dyrrhachium. He also took control of the ports on the Gulf of Corinth. In 1214 he captured Corcyra from Venice, but was assassinated later that year and was succeeded by his half-brother Theodore.

Conflict with Nicaea and Bulgaria

Theodore Komnenos Doukas immediately set out to attack Thessalonica, and fought with the Bulgarians along the way. Henry of Flanders died on the way to counterattack, and in 1217 Theodore captured his successor Peter of Courtenay, most likely executing him. The Latin Empire, however, became distracted by the growing power of Nicaea and could not stop Theodore from capturing Thessalonica in 1224. In 1225, after John III Doukas Vatatzes of Nicaea had taken Adrianople, Theodore arrived and in turn took it from him. Theodore also allied with the Bulgarians and drove the Latins out of Thrace. In 1227 Theodore crowned himself Byzantine emperor, although this was not recognized by most Greeks, especially not the Patriarch in Nicaea. 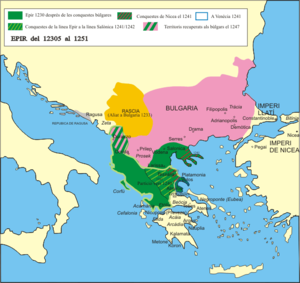 In 1230 Theodore broke the truce with Bulgaria, hoping to remove Ivan Asen II, who had held him back from attacking Constantinople. In the battle of Klokotnitsa (near Haskovo in Bulgaria) the Bulgarian emperor defeated, captured, and later blinded Theodore. His brother Manuel Komnenos Doukas took power in Thessalonica, while their nephew Michael II Komnenos Doukas took over Epirus. Theodore was released in 1237, overthrew his brother and set up his son John Komnenos Doukas as ruler of Thessalonica.

Thessalonica never regained its power after the battle of Klokotnitsa. Theodore's younger son Demetrios Angelos Doukas lost Thessalonica to Nicaea in 1246 and Michael II of Epirus allied with the Latins against the Nicaeans. In 1248 John III Doukas Vatatzes of Nicaea forced Michael to recognize him as emperor, and officially recognized him in turn as despotēs in Epirus. Vatatzes' granddaughter Maria later (in 1256) married Michael's son Nikephoros, although she died in 1258. Also in 1248 Michael's daughter Anna married William II, Prince of Achaea, and Michael decided to honour this alliance over his obligations to Vatatzes. The allies were defeated in the ensuing conflict at the Battle of Pelagonia in 1259. 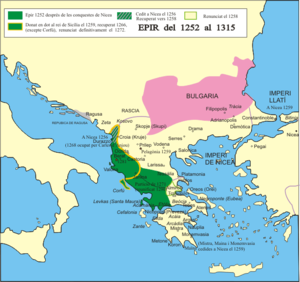 Emperor Theodore II Laskaris allied with Michael II and their children, betrothed by John years before, finally married in 1256, with Theodore receiving Dyrrhachium in return. Michael did not accept this transfer of land and in 1257 revolted, defeating a Nicaean army led by George Acropolites. As Michael marched on Thessalonica, he was attacked by King Manfred of Sicily, who conquered Albania and Corcyra. However, Michael immediately allied with him by marrying his daughter Helena to him. After Theodore II died, Michael, Manuel, and William II fought the new Nicaean emperor Michael VIII Palaiologos. The alliance was very unstable and in 1259 William was captured at the disastrous Battle of Pelagonia. Michael VIII went on to capture Michael II's capital of Arta, leaving Epirus with only Ioannina and Vonitsa. Arta was recovered by 1260 while Michael VIII was occupied against Constantinople.

After Michael VIII restored the empire in Constantinople in 1261 he frequently harassed Epirus, and forced Michael's son Nikephoros to marry his niece Anna Kantakouzene in 1265. Michael considered Epirus a vassal state, although Michael II and Nikephoros continued to ally with the Princes of Achaea and the Dukes of Athens. In 1267 Corcyra and much of Epirus were taken by Charles of Anjou, and in 1267/68 Michael II died. Michael VIII did not attempt to annex Epirus directly, and allowed Nikephoros I to succeed his father and deal with Charles, who captured Dyrrhachium in 1271. In 1279 Nikephoros allied with Charles against Michael VIII, agreeing to become Charles' vassal. With Charles' defeat soon after Nikephoros lost Albania to the Byzantines.

Under Andronikos II Palaiologos, son of Michael VIII, Nikephoros renewed the alliance with Constantinople. Nikephoros, however, was persuaded to ally with Charles II of Naples in 1292, although Charles was defeated by Andronikos's fleet. Nikephoros married his daughter to Charles's son Philip I of Taranto and sold much of his territory to him. After Nikephoros's death in c. 1297 Byzantine influence grew under his widow Anna, Andronikos's cousin, who ruled as regent for her young son Thomas I Komnenos Doukas. In 1306 she revolted against Philip in favour of Andronikos; the Latin inhabitants were expelled but she was forced to return some territory to Philip. In 1312 Philip abandoned his claim to Epirus and claimed the defunct Latin Empire of Constantinople instead as the inheritance of his wife Catherine II of Valois, Princess of Achaea. 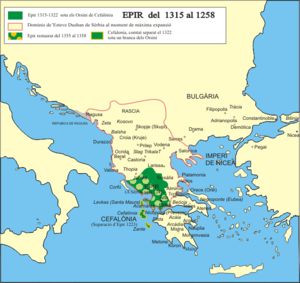 Anna succeeded in marrying off Thomas to a daughter of Michael IX, but Thomas was assassinated in 1318 by his cousin Nicholas Orsini, who married his widow and took control of Epirus. He was recognized as legitimate by Andronikos, but was overthrown by his brother John in 1323. John was poisoned around 1335 by his wife Anna, who became regent for their son Nikephoros II. In 1337 the new Emperor, Andronikos III Palaiologos, arrived in northern Epirus with an army partly composed of 2,000 Turks contributed by his ally Umur of Aydın. Andronikos first dealt with unrest due to attacks by Albanians and then turned his interest to the Despotate. Anna tried to negotiate but Andronikos demanded the complete surrender of the Despotate to which she finally agreed. Thus Epirus came peacefully under imperial rule.

A term of the surrender agreement was that Nikephoros would be engaged to one of the daughters of the emperor's right-hand man, John Kantakouzenos. When the time of the engagement came, Nikephoros had vanished. Andronikos learned that Nikephoros had fled to Italy, with the help of members of the Epirote aristocracy who supported an independent Epirus. He stayed in Taranto, Italy, in the court of Catherine II of Valois (Philip of Taranto's widow), the titular empress of Constantinople.

In 1339, there was a revolt supported by Catherine of Valois, who was in the Peloponnese at the time, and by Nikephoros who had returned to Epirus, based in Thomokastron. At the end of 1339 the imperial army returned to the area and next year, 1340, Andronikos III himself arrived together with John Kantakouzenos. Nikephoros was persuaded through diplomacy to recognize the authority of the emperor. He surrendered Thomokastron, married Maria Kantakouzene, the daughter of John Kantakouzenos, and received the title of panhypersebastos.

The Empire soon fell into a civil war between John V Palaiologos and John VI Kantakouzenos, and Epirus was conquered by the Serbian King Stefan Uroš IV Dušan in 1348. Nikephoros II took advantage of the Byzantine civil war and the death of Dušan to escape and to reestablish himself in Epirus in 1356, to which he also added Thessaly. Nikephoros was killed in battle putting down an Albanian revolt in 1359, and the territory of the former despotate became a component part of the personal Empire of Dusan's half-brother, Simeon-Siniša Palailogos. Simeon was also governing Thessaly at the time and, as Chronicle of Ioannina show, left much of the territory under the control of Albanian clans establishing short lived entities: the clan of Peter Liosha held Arta and the clan of Muriq Shpata held Aetoloacarnania, with Angelokastron as capital.[6]

In 1367 the part of the Epirotan Despotate was resurrected under local Serbian nobleman Thomas II Preljubović who kept Ioannina. After Thomas' death in 1384, his widow remarried in 1385 and transferred the Despotate to homage of Italian nobility. The state tradition was carried on by the Serbian and Italian rulers of Ioannina, who solicited aid from the Ottoman Turks against the Albanians. In 1399 the Albanian leader of Principality of Gjirokastër, Gjon Zenebishi captured the Despot Esau de' Buondelmonti and released him after 15 months, when his relatives in Italy offered a huge amount of money as a ransom. By 1416 the Tocco family of Cephalonia, succeeded in reuniting Epirus, or at least in asserting their control over its towns. But internal dissention eased the Ottoman conquest, which proceeded with the capture of Ioannina in 1430, Arta in 1449, Angelokastron in 1460, and finally Vonitsa in 1479. With the exception of several coastal Venetian possessions, this was the end of Frankish rule in mainland Greece.