Marcian (Latin: Flavius Marcianus Augustus;[2] 392 – 27 January 457)[1] was Byzantine Emperor from 450 to 457. Marcian's rule marked a recovery of the Eastern Empire, which the Emperor protected from external menaces and reformed economically and financially. On the other side, the isolationistic policies of Marcian left the Western Roman Empire without help against barbarian attacks, which materialized in the Italian campaigns of Attila and in the Vandal sack of Rome (455).

Marcian was born in 392[3] in Illyricum[4] or Thracia.[5] The son of a soldier, he spent his early life as an obscure soldier, member of a military unit located at Philippopolis.[5] Marcian was dispatched with his unit for a war against the Sassanids (probably the Roman-Sassanid war of 421–422),[6] but along the road East he fell ill in Lycia;[7][8] at this time he might have already been tribunus and commander of his unit.[6]

After recovering from his illness, he went to Constantinople, where he served for fifteen years as domesticus under the generals Ardaburius and Aspar.[7][9] In 431/434, while fighting in Africa under Aspar, Marcian was taken prisoner by the Vandals; according to a later legend, he was brought before King Geiseric (428–477), who knew by an omen that Marcian was to be Emperor and was released on his oath never to take up arms against the Vandals.[5][10]

Through the influence of these generals he became a captain of the guards, and was later raised to the rank of senator. On the death of Theodosius II (450) he was chosen as consort by the latter's sister and successor, Pulcheria,[5] and called upon to govern a Roman Empire greatly humbled and impoverished by the ravages of the Huns.

Upon becoming Emperor, Marcian repudiated the embarrassing payments of tribute to Attila the Hun (434–453), which the latter had been accustomed to receiving from Theodosius II in order to refrain from attacks on the Eastern Empire. Aware that he could never capture the eastern capital of Constantinople, Attila turned to the west and waged his famous campaigns in Gaul 451 and Italy (452) while leaving Marcian's dominions alone.

Marcian reformed the finances, checked extravagance, and repopulated the devastated districts. He repelled attacks upon Syria and Egypt (452), and quelled disturbances on the Armenian frontier (456). The other notable event of his reign is the Council of Chalcedon (451), in which Marcian endeavored to mediate between the rival schools of theology. 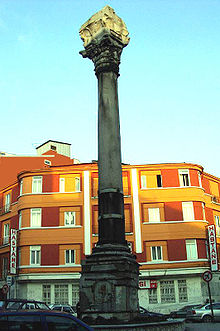 Column of Marcian (Turkish: Kıztaşı) in the Fatih district of Istanbul.

Marcian generally ignored the affairs of the Western Roman Empire, leaving that tottering half of the empire to its fate. He did nothing to aid the west during Attila's campaigns, and, living up to his promise, ignored the depredations of Geiseric even when the Vandals sacked Rome in 455. It has recently been argued, however, that Marcian was more actively involved in aiding the Western Empire than historians had previously believed and that Marcian's fingerprints can be discerned in the events leading up to, and including, Attila's death.[11]

Shortly before Attila's death in 453, conflict had begun again between him and Marcian. However, the powerful Hun king died before all-out war broke out. In a dream, Marcian claimed he saw Attila's bow broken before him, and a few days later, he got word that his great enemy was dead.

Marcian died on January 27, 457[1] of disease, possibly gangrene contracted during a long religious journey. He was buried in the church of the Holy Apostles in Constantinople, together with Pulcheria.[6]

Despite his short reign and his writing off of the west Marcian is considered one of the best of the early Eastern Roman Emperors. The Eastern Orthodox Church recognizes him and his wife Pulcheria as saints, with their feast day on February 17.

Marcia Euphemia was the only known daughter of Marcian, and she was married to Anthemius, later Western Roman Emperor.[12] The identity of her mother is unknown.[13]

Pulcheria was his second wife.[5] Pulcheria had taken a religious vow of chastity. The second marriage was a mere political alliance, establishing Marcian as a member of the Theodosian dynasty by marriage. The marriage of Marcian to Pulcheria was never consummated, consequently Euphemia never had younger half-siblings.[13][14]

Marcian was played by the Hollywood star Jeff Chandler in the film Sign of the Pagan (1954).