Church of the Holy Apostles

The Church of the Holy Apostles (Greek: Ἅγιοι Ἀπόστολοι, Agioi Apostoloi; Turkish: Havariyyun), also known as the Imperial Polyandreion, was a Christian church built in Constantinople, capital of the Eastern Roman Empire, in 550. It was second only to the Church of the Holy Wisdom (Hagia Sophia) among the great churches of the capital. When Constantinople fell to the Ottomans in 1453, the Holy Apostles briefly became the seat of the Ecumenical Patriarch of the Greek Orthodox Church. In 1461, however, it was destroyed by the Ottomans to make way for the Fatih Mosque.

The original church of the Holy Apostles was dedicated in about 330 by Constantine the Great, who made Constantinople the capital of the Roman Empire. The church was unfinished when Constantine died in 337, and it was brought to completion by his son and successor Constantius II, who buried his father's remains there. The church was dedicated to the Twelve Apostles of Jesus, and it was the Emperor's intention to gather relics of all the Apostles in the church. In the event, only relics of Saint Andrew, Saint Luke and Saint Timothy (the latter two not strictly apostles) were acquired, and in later centuries it came to be assumed that the church was dedicated to these three only.

By the reign of the Emperor Justinian I the church was no longer considered grand enough, and a new Church of the Holy Apostles was built on the same site. The historian Procopius attributes the rebuilding to Justinian, while the writer known as Pseudo-Codinus attributes it to the Empress Theodora. The new church was designed and built by the architects Anthemius of Tralles and Isidorus of Miletus, and was consecrated on 28 June 550. The relics of Constantine and the three saints were re-installed in the new church, and a mausoleum for Justinian and his family was built at the end of its northern arm.

For more than 700 years the church of the Holy Apostles was the second-most important church in Constantinople, after that of the Holy Wisdom (Hagia Sophia). But whereas the church of the Holy Wisdom was in the oldest part of the city, that of the Holy Apostles stood in the centre of the newer part of the much expanded imperial capital, on the great thoroughfare called Mese or Centre Street, and was the busiest church in the city. Most emperors and many patriarchs and bishops were buried in the church, and their relics were venerated by the faithful for centuries. 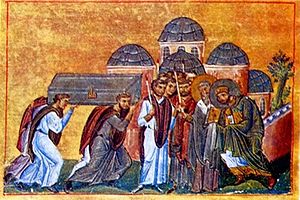 The return of the relics of St. John Chrysostom to the Church of the Holy Apostles in Constantinople.

The most treasured possessions of the church were the skulls of Saints Andrew, Luke and Timothy, but the church also held relics of Saint John Chrysostom and other Church Fathers, saints and martyrs. The church also held what was believed to be part of the "Column of Flagellation", to which Jesus had been bound and flogged. Over the years the church acquired huge amounts of gold, silver and gems donated by the faithful.

The church was renovated and probably enlarged in the 9th century by the Emperor Basil I. In the 10th century Constantine of Rhodes composed a Description of the building of the Apostles in verse, which he dedicated to Constantine VII. The basilica was looted during the Fourth Crusade in 1204. The historian Nicetas Choniates records that the Crusaders plundered the imperial tombs and robbed them of gold and gems. Not even Justinian's tomb was spared. The tomb of Emperor Heraclius was opened and his golden crown was stolen along with the late Emperor's hairs still attached on it. Some of these treasures were taken to Venice, where they can still be seen in St Mark's Basilica.

When Michael VIII Palaeologus recaptured the city from the Crusaders, he erected a statue of the Archangel Michael at the church to commemorate the event, and himself. The church was restored again by Andronicus II Palaeologus in the early 14th century, but thereafter fell into disrepair as the Empire declined and Constantinople's population fell. The Florentine Cristoforo Buondelmonti saw the dilapidated church in 1420.

In 1453 Constantinople fell to the Ottoman Turks. The cathedral church of the Holy Wisdom was seized and turned into a mosque, and the Sultan Mehmed II ordered the Greek Patriarch Gennadius Scholarius to move to the church of the Holy Apostles, which thus became the administrative centre of the Greek Orthodox Church. But the area around the church was soon settled by Turks, and there was increasing hostility to such a large and centrally located building remaining in Christian hands. Gennadius therefore decided to move the Patriarchate to the Church of St Mary Pammakaristos in the main Christian part of the city, the Phanar district.

Rather than convert the church of Holy Apostles into a mosque, Mehmed decided to demolish it and build a mosque of comparable magnificence on the site. The result was the Fatih Cami (Mosque of the Conqueror), which still occupies the site and houses Mehmed's tomb.

The grounds of the first church of the Holy Apostles contained both a rotunda mausoleum built by Constantine and a church built soon afterward by his successor Constantius.[1] Little is known of the appearance of this original church except that it was cross-shaped, but the historian Eusebius (c. 263–339) gives the following description of Constantine's mausoleum and the surrounding grounds before Constantius' church was built:[2]

This building he carried to a vast height, and brilliantly decorated by encasing it from the foundation to the roof with marble slabs of various colors. He also formed the inner roof of finely fretted work, and overlaid it throughout with gold. The external covering, which protected the building from the rain, was of brass instead of tiles; and this too was splendidly and profusely adorned with gold, and reflected the sun’s rays with a brilliancy which dazzled the distant beholder. The dome was entirely encompassed by a finely carved tracery, wrought in brass and gold. Such was the magnificence with which the emperor was pleased to beautify this church. The building was surrounded by an open area of great extent, the four sides of which were terminated by porticos which enclosed the area and the church itself. Adjoining these porticos were ranges of stately chambers, with baths and promenades, and besides many apartments adapted to the use of those who had charge of the place.

The cruciform plan was a landmark development in Christian architecture, because it replaced a basilica plan with the centralized shrine plan.[3] Dozens of cruciform church buildings in the late fourth and early fifth centuries were rough imitations of this first Church of the Holy Apostles, such as St. Ambrose's Church of the Apostles in Milan and the Church of Saint Simeon Stylites in Aleppo, Syria.[3][4]

The second church, built under Justinian I, was also cruciform and was surmounted by five domes: one above each arm of the cross and one above the central bay where the arms intersected. The western arm of the cross extended farther than the others, forming an atrium. The design details of the building are a matter of dispute. The contemporary historian Procopius (c. 500–565) gives the following description:[1]

Two straight lines were drawn, intersecting each other in the middle of the form of a cross, one extending east and west, and the other which crossed this running north and south. On the outside these lines were defined by walls on all of the sides, while on the inside they were traced by rows of columns standing above one another. At the crossing of the two straight lines, that is to say at about the middle, there was set aside a place which may not be entered by those who may not celebrate the mysteries; this with good reason they call the "sanctuary." The two arms of this enclosure which lie along the transverse line are equal to each other, but the arm which extends toward the west, along the upright line, is enough longer than the other to make the form of the cross. That portion of the roof which is above the sanctuary, as it is called, is built, in the center at least, on a plan resembling the Church of Sophia, except that it is inferior to it in size. The arches, four in number, rise aloft and are bound together in the same manner and the circular drum which stands upon them is pierced by windows, and the dome which arches above this seems to float in the air and not to rest upon solid masonry, though actually it is well supported. Thus, then, was the central part of the roof constructed. And the arms of the building, which are four,... were roofed on the same plan as the central portion, but this one feature is lacking: underneath the domes the masonry is not pierced by windows.

The 12th century writer Nicholas Mesarites also recorded a description of the church, of which only parts survive. Other churches such as the Basilica of St. John, St Mark's Basilica, and Cathédrale Saint-Front are believed to have been modeled on Holy Apostles, but they differ from each other significantly.[1][5] 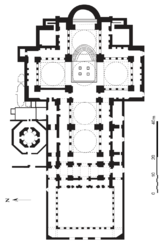 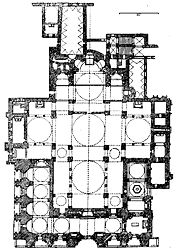 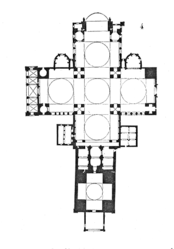 Cathédrale Saint-Front
Périgueux, France
Floor plans of churches believed to have been inspired by the second Church of the Holy Apostles while it existed. 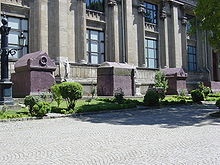 Porphyry sarcophagi of Byzantine emperors on display outside the Istanbul Archaeology Museums.

The church's mausoleums were the resting place for most Eastern Roman emperors and members of their families for seven centuries, beginning with Constantine I (d. 337) and ending with Constantine VIII (d. 1028). With no more space available at that time, emperors began to be buried in other churches and monasteries around the city. The tombs located at the church of Holy Apostles are known only from lists in literary sources, one of which is contained in De Ceremoniis.[6] Among those buried there were the following: