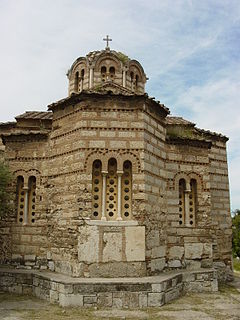 The Church of the Holy Apostles, also known as Holy Apostles of Solaki (Greek: Άγιοι Απόστολοι Σολάκη) is located in the Ancient Agora of Athens, Greece, and can be dated to around the late 10th century. "Solakis" may be the family name of those who sponsored a later renovation of the church, or from "Solaki" for the densely populated area around the church in the 19th century.

The church is particularly significant as the only monument in the Agora, other than the Temple of Hephaestus, to survive intact since its foundation, and for its architecture: it was the first significant church of the middle Byzantine period in Athens, and marks the beginning of the so-called "Athenian type", successfully combining the simple four-pier with the cross-in-square forms. The church was built partly over a 2nd century nymphaion, and was restored to its original form between 1954 and 1957.

From evidence of various repairs and reconstructions, four distinct building phases can be distinguished. The original floorplan is a cross with apses on four sides and a narthex on the west side, with four columns supporting a dome. The altar and floor were originally of marble. Tiles on the outer walls have Kufic-like decorative patterns.

A few surviving wall paintings in the central aisle date to the 17th century, and paintings from nearby churches were also placed elsewhere within the church.