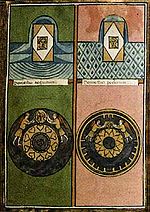 The insignia of office of the two comites domesticorum of the Eastern Empire, according to the Notitia Dignitatum: the shields of the domestici and the codicils of office

A domesticus was a member of the protectores domestici, an elite guard unit of the Late Roman army, who served as bodyguards and staff officers to the emperor. As its name testifies, these were troops considered as belonging to the household of the emperor. After a few years' service in the corps, a domesticus would normally be granted a commission by the emperor and placed in command of a military regiment. The title was retained in the East Roman Empire, hellenized as domestikos, and acquired a variety of functions.