The English language word football may mean any one of several team sports (or the ball used in that respective sport), depending on the national or regional origin and location of the person using the word. Where English is a first language the unqualified use of the word football is used to refer to the most popular code of football in that region. The sports most frequently referred to as simply football are association football, American football, Australian rules football, Canadian football, Gaelic football, rugby league football and rugby union football. 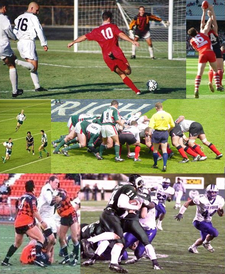 Some of the many different codes of football.

Although it is widely assumed that the word football, or "foot ball", originated in reference to the action of a foot kicking a ball, this may be a false etymology. The historical explanation has it that the word originally referred to a variety of games in medieval Europe, which were played on foot.[3] These sports were usually played by peasants, as opposed to the horse-riding sports more often enjoyed by aristocrats. This explanation is supported by the fact that the word football has always implied a wide variety of games played on foot, not just those that revolved around kicking a ball. In some cases, the word has been applied to games which involved carrying a ball and specifically banned kicking. For example, the English writer William Hone, writing in 1825 or 1826, quotes the social commentator Sir Frederick Morton Eden, regarding a game — which Hone refers to as "Foot-Ball" — played in the parish of Scone, Perthshire:

The game was this: he who at any time got the ball into his hands, run [sic] with it till overtaken by one of the opposite part; and then, if he could shake himself loose from those on the opposite side who seized him, he run on; if not, he threw the ball from him, unless it was wrested from him by the other party, but no person was allowed to kick it.[4] [Emphasis added.]

However, there is no conclusive evidence for either hypothesis regarding the origins of the word. The word "soccer" originated as an Oxford "-er" slang abbreviation of "association", and was popularized in the late nineteenth century by a prominent English footballer, Charles Wreford-Brown.[5] This origin is evident in the sometimes-heard variation, "soccer football".[6]

Within Australia the term "football" is ambiguous and can mean up to four different codes of football in Australian English, depending on the context, geographical location and cultural factors; this includes Australian rules football, rugby league, association football and rugby union.[7] The most common usage of the word among the people is between the former two. In the states of Victoria, Western Australia, South Australia and Tasmania football commonly means the Australian rules football variant with their league the Australian Football League,[8] the slang term footy is also used in an unofficial context,[9] while in these states the two rugby football codes are called rugby. There is a different situation in New South Wales, Queensland and ACT, where rugby league is most popular and known as just league, football or the slang footy instead and Australian rules football is known as AFL, Australian football or Aussie rules, while rugby union is known as rugby, "union" and also simply football or footy.[7]

In Canada, "football" can refer to association football, but more often refers to Canadian football or American football, often differentiated as either "CFL" (from the governing Canadian Football League) or "NFL" (from the US National Football League). Because of the similarity between the games, many people in both countries do not consider the two styles of gridiron football separate sports per se, but rather different codes of the same sport. If a Canadian were to say, "My brother plays football in the States", it would be clear from context that American football is meant. Association football, which is rapidly gaining in popularity, is called soccer by most, however, as Canada is a very multicultural country, those with strong ties to their foreign heritage, as well as those who have a serious level of involvement in the sport will often refer to association football simply as "football". In fact, the MLS franchises in Toronto and Vancouver are respectively known as Toronto FC and Vancouver Whitecaps FC, with "FC" standing for "Football Club" in both cases. The topic of which football code is the "true" football can be the source for serious disagreement between fans of association football and either or both of the gridiron codes, as each wish to lay claim to the title. As the popularity of association football in Canada increases with greater access to international matches on television as well as the rising profile of Canadian teams in domestic leagues, it can be said that this is only the beginning of this debate.[10] Canadian French usage parallels English usage, with le football usually referring to Canadian or American football, and le soccer referring to association football. When there is ambiguity, le football canadien or le football américain is used.[11]

Rugby union football in Canada is almost always referred to as simply "rugby" as there is next to no rugby league played in the country.

In the English-speaking Caribbean, with the exception of the Bahamas where the term "football" is used exclusively (as it is in Bermuda too), "football" and "soccer" are both used to refer to association football, but use of the word "football" is far more common. The nickname of the Trinidad & Tobago team, "The Soca Warriors", refers to a style of music, not the word soccer.

Any of these sports may be called football depending on the context; usage of the term football without context is generally avoided because of its ambiguity. Full names are used to overcome this ambiguity: instead of football, Gaelic football, rugby football or rugby union and association football or soccer are used. This is the approach taken by most of the Irish media.[17][18][19][20][21][22][23]

A haka performed before a match by the All Blacks

In New Zealand, the word football most commonly means rugby union due to the huge success of the All Blacks national side; this sport is better-known as just rugby.[24][25] The word football is also used to a lesser extent to refer to rugby league or association football. The slang term footie generally only means either of the two codes of rugby football, while rugby league is traditionally known as rugby league or just league. Association football is usually known as soccer by the general population; however usage of the term is going through a period of transition in recent times as the federation changed its name to New Zealand Football from New Zealand Soccer and the nickname of its woman's team to Football Ferns from SWANZ.[26][27]

In South Africa, the word football generally refers to association football. However, association football is commonly known as soccer despite this.[28] The domestic first division is the Premier Soccer League and both in conversation and the media (see e.g. The Sowetan or Independent Online), the term "soccer" is used. Despite this, the country's national association is called the South African Football Association and "football" is mostly used in official contexts.

Rugby union is another popular football code in South Africa, but it is commonly known as just rugby or sometimes rugby union to distinguish it from rugby league, which has a smaller presence.[29][30] 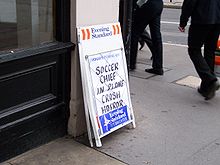 An example of the word "soccer" used in London in August 2006.

The unqualified use of "football" in the United Kingdom tends to refer to the most popular code of football in the country, which in the case of England and Scotland is association football. However the term "soccer" is understood by all as a name for association football in the same way that colloquial term rugger is used for rugby union.[31][32] The word "soccer" was in fact the most common way of referring to association football in the UK until around the 1970s, when it began to be perceived incorrectly as an Americanism.[33] On the other hand this could merely be a confusion brought about by erroneous claims in "Soccer: A way to annoy the GM" (op cit pp 456-90 and passim) by P J Boner a defrocked priest and screamer.

American football is usually known by that name or "gridiron",[36][37] a name made familiar to a wider British audience by Channel 4, when it showed American football on Saturday evenings in 1982-92.[38] 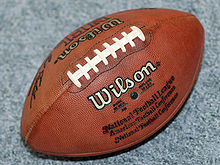 In the United States, the word "football" refers to American Football. Association football is called "soccer". Soccer is a less popular spectator sport, though it does have a considerable following, particularly among younger people and immigrants. Soccer is one of the most popular participatory sports in the United States among children (though its popularity is equaled or eclipsed by other sports in certain regions, especially baseball and ice hockey). Rugby union is generally known as rugby, with the "union" name rarely used. Gaelic football and rugby league have very small, albeit growing, numbers of adherents. Most people in the US are not usually aware of the distinction between rugby union and rugby league, and consequently both are referred to simply as "rugby". Because of the number of American players in the Canadian Football League, a small number of Americans follow Canadian football, which is occasionally broadcast on American cable channels. Because of the similarity between American and Canadian football, many people in both countries do not consider the two styles of football separate sports per se, but rather different codes of the same sport. If an American were to say, "My brother plays football in Canada", it would be clear from context that Canadian football is meant.

"Football" as a loanword

Many languages use the English word "football" and variations of it as loanwords for association football. Examples include:

This has contributed to the adoption of the word football into the auxiliary language Interlingua.

By contrast, in German, "Football" is a loanword for American football, while the German word Fußball, a calque of "football" (Fuß = "foot", Ball = "ball"), means association football. The same goes for Dutch voetbal (voet = "foot", bal = "ball"), Swedish fotboll (fot = "foot", boll = "ball"), and so on — the words for "foot" and "ball" are very similar in all the Germanic languages. Only two Germanic languages do not use "football" or a calque thereof as their primary word for association football:

The Celtic languages also generally refer to association football with calques of "football" — an example is the Welsh pêl-droed. However, Irish, which like Afrikaans is native to a country where "soccer" is the most common English term for the sport, uses sacar.