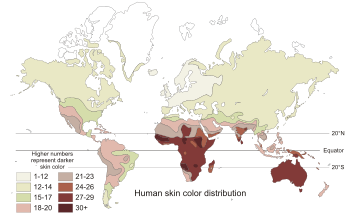 In some societies and among some anthropologists, color terminology (or colour terminology) was used to label races, sometimes in addition to a non-color term for the same race. Identifying races in terms of their skin color has been common since at least the Physiognomica falsely attributed to Aristotle.

Other scientists were more cautious about such categorization, and Charles Darwin argued that the number of categories, or in this case the number of different colors, is completely arbitrary and subjective. For example, some claimed three distinct colors, some four, and others have claimed even more. In contrast, Darwin argued that there are gradations, or degrees between the numbers of categories claimed, and not distinct categories, or colors.[1] 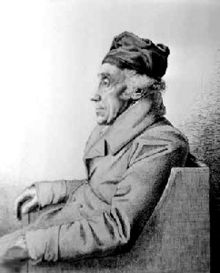 One of the earlier uses of the concept of “black” as a metaphor for race was first used at the end of the 17th century when a French doctor named François Bernier (1625–1688), an early proponent of scientific racism, divided up humanity based on facial appearance and body type. He proposed four categories: Europeans, Far Easterners, Lapps, and Blacks.[2] The first major scientific model was created in 18th century when Carolus Linnaeus recognized four main races: Europeanus which he labeled the white race, Asiatic, which he labeled the yellow race, Americanus, which he labeled the red race, and Africanus, which he labeled the black race.[3] By adding the brown race, which he called "Malay" for Polynesians, Melanesians of Pacific Islands, and aborigines of Australia,[4] Linnaeus' protégé, anthropology founder Johann Friedrich Blumenbach (1752–1840), came up with the five color typology for humans: white people (the Caucasian or white race), more or less black people (the Ethiopian or black race), yellow people (the Mongolian or yellow race), cinnamon-brown or flame colored people (the American or red race) and brown people (the Malay or brown race). Blumenbach listed the "races" in a hierarchic order of physical similarities: Caucasian, followed by American, followed by Mongolian, followed by Malayan, followed by Ethiopian. Rand McNally's 1944 map of races describes Amerindians as being the copper race or copper people.[5] 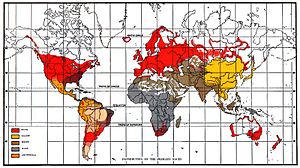 A 1920 map shows the races of the world classified by color: White (shown colored red), black (shown colored gray), yellow, brown, and red (shown colored light orange) (It was understood that Amerindians were the red race.); areas of mixed black and white populations are shown as purple. Later maps of the 1930s through 1960s brought the colors portrayed into line with the accepted definitions of the various races at that time according to physical anthropology (rather than simple external skin color alone as in this 1920 map) and one later map classified North Africans, Middle Easterners, the Iranian peoples, and South Asians as being white, Turkish peoples as being yellow, and restricted the brown category to those now called Austronesians, who were termed the Malayan race.[6]

According to conservative writer Dinesh D'Souza, "Blumenbach's classification had a lasting influence in part because his categories neatly broke down into familiar tones and colors: white, black, yellow, red, and brown."[7][8]

Two historical anthropologists favored a binary racial classification system that divided people into a light skin and dark skin categories. 18th century anthropologist Christoph Meiners, who first defined the Caucasian race, posited a "binary racial scheme" of two races with the Caucasian whose racial purity was exemplified by the "venerated... ancient Germans", although he considered some Europeans as impure "dirty whites"; and "Mongolians", who consisted of everyone else.[9] Meiners did not include the Jews as Caucasians and ascribed them a "permanently degenerate nature".[10] Hannah Franzieka identified 19th c. writers who believed in the "Caucasian hypothesis" and noted that "Jean-Julien Virey and Louis Antoine Desmoulines were well-known supports of the idea that Europeans came from Mount Caucasus."[11] In his political history of racial identity, Bruce Baum wrote,"Jean-Joseph Virey (1774-1847), a follower of Chistoph Meiners, claimed that "the human races... may divided... into those who are fair and white and those who are dark or black."[12] Later, another binary racial classification system took hold de facto in the United States based on light skin people and dark skin or black people. According to Stephen Saris, in the United States there are two big racial divides. "First, there is the black-white kind, which is basically anti-black.". The second racial divide is the one is "between whites and everyone else" with whites being "narrowly construed" and everyone else being called "people of color".[13]

Racial classification according to skin color became more complex when anthropologists added other, less obvious characteristics, in their attempt to achieve a scientific classification of races. It was later found that skin color depended essentially from the amount of melanin, and could vary widely in the same community. Thus, it could not provide a satisfying way to classify ethnic groups, much less "races." Following World War II and the discredit of such racial classifications, more and more biologists and anthropologists began to question the concept itself of "race." Thus, The Race Question statement by the UNESCO, in the 1950s, proposed to substitute the term "ethnic groups" to the concept of "race," arguing that human communities were defined as much by cultural traits (language, religion, etc.) as by biological characteristics (skin color being only one of them, along with blood types, which did not recover previous racial classifications, etc.).

Symbolism and uses of color terminology

The Martinique-born French Frantz Fanon and African-American writers Langston Hughes ("That Word Black"), Maya Angelou, and Ralph Ellison, among others, wrote that negative symbolisms surrounding the word "black" outnumber positive ones. They argued that the good vs. bad dualism associated with white and black unconsciously frame prejudiced colloquialisms. In the 1970s the term black replaced Negro in the United States.[14]

In some societies people can be sensitive to gradations of skin tone, which may be due to intermarriage or to albinism and which can affect power and prestige. In 1930s Harlem Slang such gradations were described by a tonescale of "high yaller [yellow], yaller, high brown, vaseline brown, seal brown, low brown, dark brown".[15] These terms were sometimes referred to in blues music, both in the words of songs and in the names of performers. In 1920s Georgia, Willie Perryman followed his older brother Rufus in becoming a blues piano player: both were albino Negroes with pale skin, reddish hair and poor eyesight. Rufus was already well established as "Speckled Red", Willie became "Piano Red".[16] The piano player and guitarist Tampa Red from the same state developed his career in Chicago, Illinois, at that time: his name may have come from his light skin tone, or possibly reddish hair.

More recently such categorization has been noted in the Caribbean. It is reported that skin tones play an important role in defining how Barbadians view one another, and they use terms such as "brown skin, light skin, fair skin, high brown, red, and mulatto".[17] An assessment of racism in Trinidad notes people often being described by their skin tone, with the gradations being "HIGH RED – part White, part Black but ‘clearer’ than Brown-skin: HIGH BROWN – More white than Black, light skinned: DOUGLA –part Indian and part Black: LIGHT SKINNED, or CLEAR SKINNED Some Black, but more White: TRINI WHITE – Perhaps not all White, behaves like others but skin White".[18] In Jamaica albinism has been stigmatized, but the albino dancehall singer Yellowman took his stage name in protest against such prejudice and has helped to end this stereotype. The West Indian region uses the term "coolie" for all people of east Indian descent. In Trinidad, however, use of the term is considered extremely offensive.

In Russia, persons of Caucasus or Asian descent and other people having black hair are often referred to as Black (not because of skin color). "White", apart from its racial meaning, is also a term denoting opponents of the Bolsheviks during the Russian Civil War (see White movement for this usage) and "Red", apart from its racial meaning, means Communists or Bolsheviks while "Green" often means Ecologists.

Sometimes, Belarus and Belarusians have been referred to (in Western languages, not Russian) as "White Russia" and "White Russians", which can be misleading; see those articles for discussion in more depth.

Huang (yellow) is a common surname, but does not refer to the East Asian race as was popular in Western languages until recently. However, the Yellow Emperor was a legendary founder of China. Yellow is also identified with the "center" cardinal direction (blue-east, red-south, white-west, black-north) while China is known as Zhongguo "middle kingdom".

White (白 bai) means "plain" or "free of charge" in many common expressions and was not traditionally used to refer to Europeans or descendants, who were usually identified as "洋人" (yáng rén, "people from [across the] ocean") or some variety of "barbarians" with reddish or pinkish skin colors (e.g. Minnan ang mo, "red-haired"). Contemporary Chinese, has, however, adopted Western usage to a large extent. Black (黑 hei) is typically applied to those of African race today. However, the term "black resident" (黑户) also refers to unregistered rural migrants in cities (as in black market).

Names of ethnic minorities sometimes contain colors, not to indicate skin color, but simply for identification, possibly based on traditional clothing or geographical direction.

The Five Races Under One Union theory of national unity can be visualized through an old ROC flag and a variant which emphasized Han administration while de-emphasizing the top-to-bottom hierarchy found in the original flag. Red - Han, Yellow - Manchu, Blue - Mongol, White - Hui and Black - Tibetan.

The five cardinal directions were historically identified with colors. This was common to the Central Asian cultural area and was carried west by the westward migration of the Turks. These directional color terms were applied both to geographic features and sometimes to populations as well.

Among the natives of North America, stylized medicine wheels are typically depicted with four colors associated with not only cardinal direction, but also with color of race:

Flag of the Races

At college campuses during the 1960s, some people demonstrated for world peace by carrying a Flag of the Races (also called the Flag of the Human Race) with five horizontal stripes (from top to bottom they were red, black, brown, yellow, and white, representing respectively the American Indian race, the Negro race, the Malayan race, the Mongolian race, and the Caucasian race). Gilbert Baker is said to have gotten the idea for the rainbow flag from this flag.[20] The early flag of the Republic of China also featured five stripes standing for five ethnicities.