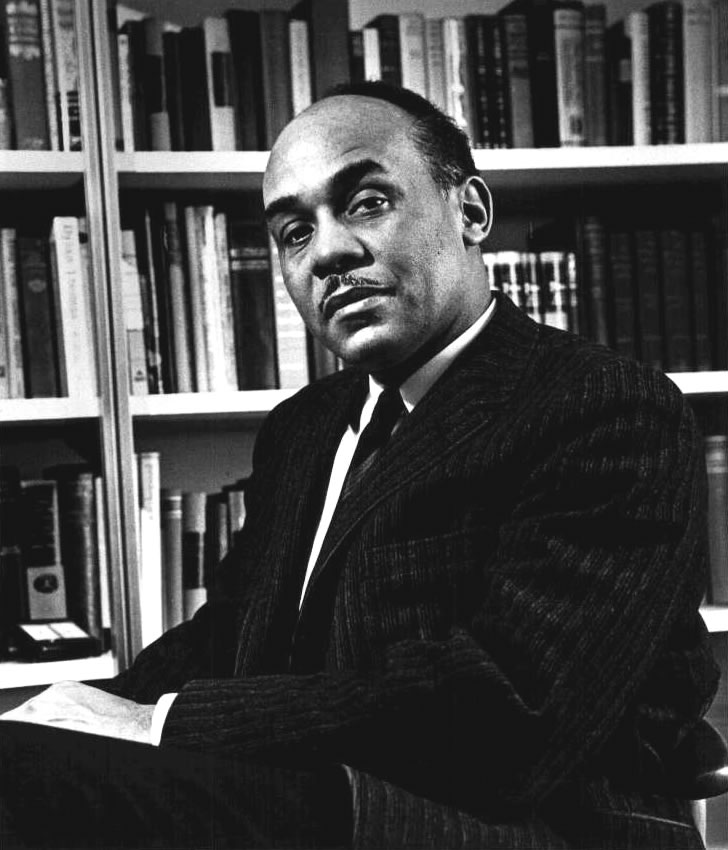 Ellison was born in Oklahoma City on March 1, 1914. Ellison's father, a small-business owner and a construction foreman, died when Ralph was three. Many years later, Ellison would find out that his father hoped he would grow up to be a poet. Early in life he became enamored of music, studying trumpet and piano.

In 1933, Ellison entered the on a scholarship to study music. Tuskegee's music department was perhaps the most renowned department at the school, headed by the conductor . (The Tuskegee choir was invited to play at many prestigious locations throughout the world, including Radio City.) Ellison also had the fortune to come under the close tutelage of the piano instructor . While he studied music primarily in his classes, he spent increasing amounts of time in the library, reading up on modernist classics. He specifically cited "" as a major awakening moment for him.

After his third year, Ellison moved to New York City to earn money for his final year. He decided to study sculpture and he made acquaintance with the artist . Perhaps Ellison's most important contact would be with the author Richard Wright, with whom he would have a long and complicated relationship. After Ellison wrote a book review for Wright, Wright encouraged Ellison to pursue a career in writing, specifically fiction. The first published story written by Ellison was a short story entitled "Hymie's Bull," a story inspired by Ellison's hoboing on a train with his uncle to get to Tuskegee. From 1937 to 1944 Ellison had over twenty book reviews as well as short stories and articles published in magazines such as and .

During WWII Ellison joined the Merchant Marine, and in 1946 he married his second wife, Fanny McConnell. She supported her husband financially while he wrote "", and typed Ellison's longhand text. She also assisted her husband in editing the typescript as it progressed.

"" explores the theme of man’s search for his identity and place in society, as seen from the perspective of an unnamed black man in the New York City of the 1940s. In contrast to his contemporaries such as Richard Wright and James Baldwin, Ellison created characters who are dispassionate, educated, articulate and self-aware. Through the protagonist, Ellison explores the contrasts between the Northern and Southern varieties of racism and their alienating effect. The narrator is "invisible" in a figurative sense, in that "people refuse to see" him, and also experiences a kind of dissociation. The groundbreaking novel, with its treatment of previously taboo issues such as incest and white America's distorted perceptions of black sexuality, won the in 1953.

In 1955, Ellison went abroad to Europe to travel and lecture before settling for a time in Rome, Italy, where he wrote an essay that appeared in a Bantam anthology called "A New Southern Harvest" in 1957. In 1958, he returned to the United States to take a position teaching American & Russian literature at and to begin a second novel, "Juneteenth". During the 1950s he corresponded with his lifelong friend, the writer Albert Murray. In these letters they commented on the development of their careers, the civil rights movement and other common interests including jazz. Much of this material was published in the collection "Trading Twelves" (2000).

In 1964, Ellison published "", a collection of essays, and began to teach at and , and continued to work on his novel. The following year, a survey of 200 prominent literary figures was released that proclaimed "Invisible Man" as the most important novel since World War II.

In 1967, Ellison experienced a major house fire at his home in Plainfield, Massachusetts, in which he claimed 300 pages of his second novel manuscript were lost. This assertion is disproved in the 2007 biography of Ellison by . A perfectionist regarding the art of the novel, Ellison had said in accepting his National Book Award for "Invisible Man", that he felt he had made "an attempt at a major novel", and despite the award, he was unsatisfied with the book. Ellison ultimately wrote over 2000 pages of this second novel, most of them by 1959. He never finished.

Writing essays about both the black experience and his love for jazz music, Ellison continued to receive major awards for his work. In 1969, he received the ; the following year, he was made a Chevalier of the by France and became a permanent member of the faculty at as the Albert Schweitzer Professor of Humanities, acting from 1970-1980.

In 1975, Ellison was elected to the and his hometown of Oklahoma City honored him with the dedication of the Ralph Waldo Ellison Library. Continuing to teach, Ellison published mostly essays, and in 1984, he received the New York City College's . The following year saw the publication of "Going to the Territory," a collection of seventeen essays that included insight into southern novelist and his friend Richard Wright, as well as the music of and the contributions of African Americans to America’s national identity.

Ralph Ellison died of on , , , and was buried in the Washington Heights neighborhood of . His wife survived him, and died , .

After his death, more manuscripts were discovered in his home, resulting in the publication of "Flying Home: And Other Stories" in 1996. In 1999, five years after his death, Ellison's second novel, "Juneteenth" (ISBN 0-394-46457-5), was published under the editorship of , a professor at and Ellison's literary executor. It was a 368-page condensation of over 2000 pages written by Ellison over a period of forty years. All the manuscripts of this incomplete novel will be published on June 17, 2008 by Modern Library, under the tentative title "".