Slavery in the ancient world, specifically, in Mediterranean cultures, comprised a mixture of debt-slavery, slavery as a punishment for crime, and the enslavement of prisoners of war.[1]

The institution of slavery condemned a majority of slaves to agricultural or industrial labour and they lived hard lives. In some of the city-states of Greece and in the Roman Empire, slaves formed a very large part of the economy, and the Roman Empire built a large part of its wealth on slaves acquired through conquest.

Masters could free slaves, and in many cases such freedmen went on to rise to positions of power. This would include those children born into slavery but who were actually the children of the master of the house. Their father would ensure that his children were not condemned to a life of slavery.

Slavery in the Ancient Near East

The Sumerian Code of Ur-Nammu includes laws relating to slaves. written circa 2100 BCE - 2050 BCE, it is the oldest known tablet containing a law code surviving today. The Babylonian Code of Hammurabi, dating to ca. 1700 BCE, also makes distinctions between the freeborn, freed and slave. 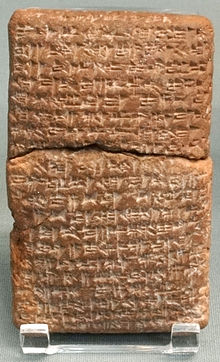 Hittite texts from Anatolia include laws regulating the institution of slavery. Of particular interest is a law stipulating that reward for the capture of an escaped slave would be higher if the slave had already succeeded in crossing the Halys River and getting farther away from the center of Hittite civilization - from which it can be concluded that at least some of the slaves kept by the Hittites possessed a realistic chance of escaping and regaining their freedom, possibly by finding refuge with other kingdoms or ethnic groups.

The difficulty of distinguishing between slaves and levied peasant labour has bedevilled the study of this subject. Private ownership of slaves, captured in war and given by the king to their captor, certainly occurred at the beginning of the Eighteenth Dynasty (1550 - 1295 BCE). Sales of slaves occurred in the Twenty-fifth Dynasty (732 - 656 BCE), and contracts of servitude survive from the Twenty-sixth Dynasty (ca 672 - 525 BCE) and from the reign of Darius: apparently such a contract then required the consent of the slave.

The Old Testament also recounts tales of slavery in Egypt: slave-dealers sold Joseph into bondage there, and the Hebrews suffered collective enslavement (Exodus, chapter 1) prior to the Exodus. However, the historicity of the Biblical account is questioned. It is noteworthy that outside of the Biblical account, no evidence has ever been found indicating the systematic enslavement of Israelites.

Slavery in the Bible

See Sabbatical year, Onesimus, Bible-based advocacy of slavery, in addition to the details of the Book of Exodus.

You could beat a slave within an inch of his or her life and if they died in the first day your punishment was a fine. If they survived one day and died, there was no fine.

Exo 21:21 Notwithstanding, if he continue a day or two, he shall not be punished: for he is his money.

As evident from the above, the Old Testament accepts the institution of slavery as such, but seeks to regulate it and ameliorate the slaves' conditions. Transmitted throughout Western culture via Christianity (and given a slightly more anti-slavery spin in the new testament), this ambiguous message could (and did) inspire both advocates of slavery and abolitionists.

The study of slavery in Ancient Greece remains a complex subject, in part because of the many different levels of servility, from traditional chattel slave through various forms of serfdom, such as Helots, Penestai, and several other classes of non-citizen.

Most philosophers of classical antiquity defended slavery as a natural and necessary institution[2] Aristotle believed that the practice of any manual or banausic job should disqualify the practitioner from citizenship. Quoting Euripides, Aristotle declared all non-Greeks slaves by birth, fit for nothing but obedience.

By the late 4th century BCE passages start to appear from other Greeks, especially in Athens, which opposed slavery and suggested that every person living in a city-state had the right to freedom subject to no one, except only to laws decided using majoritarianism. Alcidamas, for example, said: "God has set everyone free. No one is made a slave by nature." Furthermore, a fragment of a poem of Philemon also shows that he opposed slavery.

Greece in pre-Roman times consisted of many independent city-states, each with its own laws. All of them permitted slavery, but the rules differed greatly from region to region. Greek slaves had some opportunities for emancipation; though all of these came at some cost to their masters. The law protected slaves, and though a slave's master had the right to beat him at will, a number of moral and cultural limitations existed on excessive use of force by masters.

In Ancient Athens, about 30% of the population were slaves. The system in Athens encouraged slaves to save up to purchase their freedom, and records survive of slaves operating businesses by themselves, making only a fixed tax-payment to their masters. Athens also had a law forbidding the striking of slaves—if a person struck an apparent slave in Athens, that person might find himself hitting a fellow-citizen, because many citizens dressed no better. It startled other Greeks that Athenians tolerated back-chat from slaves (Old Oligarch, Constitution of the Athenians). Pausanias (writing nearly seven centuries after the event) states that Athenian slaves fought together with Athenian freemen in the Battle of Marathon, and the monuments memorialize them.[3] Spartan serfs, Helots, could win freedom through bravery in battle. Plutarch mentions that during the Battle of Salamis Athenians did their best to save their "women, children and slaves".

On the other hand, much of the wealth of Athens came from its silver mines at Laurion, where slaves, working in extremely poor conditions, produced the greatest part of the silver (although recent excavations seem to suggest the presence of free workers at Laurion). During the Peloponnesian War between Athens and Sparta, twenty thousand Athenian slaves, including both mine-workers and artisans, escaped to the Spartans when their army camped at Decelea in 413 BC.

Other than flight, resistance on the part of slaves occurred only rarely. GEM de Ste. Croix gives two reasons:

Athens had various categories of slave, such as:

The comedies of Menander show how the Athenians preferred to view a house-slave: as an enterprising and unscrupulous rascal, who must use his wits to profit from his master, rescue him from his troubles, or gain him the girl of his dreams. We have most of these plays in translations by Plautus and Terence, suggesting that the Romans liked the same genre. And the same sort of tale has not yet become extinct, as the popularity of Jeeves and A Funny Thing Happened on the Way to the Forum attest.

In some areas of Greece there existed a class of unfree labourers tied to the land and called penestae in Thessaly and helots in Sparta. Penestae and helots did not rate as chattel slaves; one could not freely buy and sell them.