The twenty-fifth dynasty of Egypt, known as the Nubian Dynasty or the Kushite Empire, was the last dynasty of the Third Intermediate Period of Ancient Egypt.

The 25th dynasty was a line of rulers originating in the Nubian Kingdom of Kush and most saw Napata as their spiritual homeland. They reigned in part or all of Ancient Egypt from 760 BC to 656 BC.[1] The dynasty began with Kashta's invasion of Upper Egypt and culminated in several years of war with the Assyrians. The 25th's reunification of Lower Egypt, Upper Egypt, and Kush created the largest Egyptian empire since the New Kingdom. They ushered in an age of renaissance by restoring Ancient Egyptian religious traditions, temples, and artistic forms, while maintaining some unique aspects of Kushite culture. [2] It was during the 25th dynasty that the Nile valley saw the first widespread construction of pyramids (many in modern Sudan) since the Middle Kingdom.[3][4][5] After Assyrian king Esarhaddon invaded Egypt and defeated the Nubians, they were succeeded by the Twenty-sixth dynasty of Egypt, the last native dynasty to rule Egypt before the Persian conquest.

The known rulers, in the History of Egypt, for the twenty-fifth dynasty are the following:

The period starting with Kashta and ending with Malonaqen is sometimes called the Napatan Period. The Kings from the twenty-fifth dynasty ruled over Napata, Meroe, and Egypt. The seat of government and the royal palace were in Napata during this period, while Meroe was a provincial city. The kings and queens were buried in El-Kurru and Nuri.[6]

Alara, the first known Nubian king and predecessor of Kashta was not a 25th dynasty king since he did not control any region of Egypt during his reign. While Piye is viewed as the founder of the 25th dynasty, some publications may include Kashta who already controlled parts of Upper Egypt. A stela of his was found at Elephantine and Kashta likely exercised some authority at Thebes since he held enough influence to have his daughter Amenirdis I adopted as the next Divine Adoratrice of Amun there. 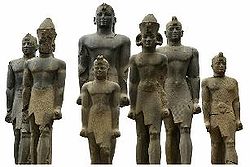 The twenty-fifth dynasty originated in Kush, or (Nubia), which is presently in Northern Sudan. The city-state of Napata was the spiritual capitol and it was from there that Piye (spelled Piankhi or Piankhy in older works) invaded and took control of Egypt.[7] Piye personally led the attack on Northern Egypt and recorded his victory in a lengthy hieroglyphic filled stele called the "Stele of Victory." Piye revived one of the greatest features of the Old and Middle Kingdoms, pyramid construction. He was a great builder. He constructed the oldest known pyramid at the royal burial site of El Kurru and expanded the Temple of Amun at Jebel Barkal.[8] Although Manetho does not mention the first king, Piye, mainstream Egyptologists consider him the first Pharaoh of the 25th dynasty.[9] [10] [11] Manetho also does not mention the last king, Tantamani, although inscriptions exist to attest to the existence of both Piye and Tantamani. 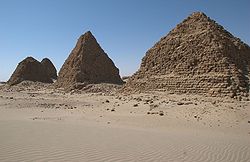 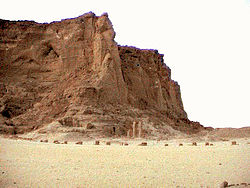 Temple of Amun at the sacred mountain, Jebel Barkal 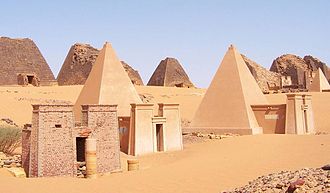 Shabaka conquered the entire Nile valley, including Upper and Lower Egypt, around 710 BC. Shabaka had Bocchoris of the Sais dynasty burned to death for resisting him. After conquering Lower Egypt, Shabaka transferred the capitol to Memphis. Shabaka restored the great Egytian monuments and returned Egypt to a theocratic monarchy by becoming the first priest of Amon. In addition, Shabaka is known for creating a well preserved example of Memphite theology by inscribing an old religious papyrus into the Shabaka Stone.

Recent research by Dan'el Kahn [13] suggests that Shebitku was king of Egypt by 707/706 BC. This is based on evidence from an inscription of the Assyrian king Sargon II, which was found in modern day Northwestern Iran and dated to 706 BC. This inscription calls Shebitku the king of Meluhha, and states that he sent back to Assyria, a rebel named Iamanni in handcuffs. Kahn's arguments have been widely accepted by many Egyptologists including Rolf Krauss, and Aidan Dodson [14] and other scholars at the SCIEM 2000 (Synchronisation of Civilisations of the Eastern Mediterranean in the Second Millennium B.C.) project with the notable exception of Kenneth Kitchen and Manfred Bietak at present.

Taharqa ushered in one of Ancient Egypt's greatest periods of renaissance. He ruled as Pharaoh from Memphis, but constructed great works throughout the Nile Valley, including works at Jebel Barkal, Kawa, and Karnak.[15] At Karnak, the Sacred Lake structures, the kiosk in the first court, and the colonnades at the temple entrance are all owed to Taharqa and Mentuemhet. He is the pharaoh that is mentioned in the Christian bible (Isaiah 37:8-9, & 2 Kings 19:8-9) as the savior of the Hebrew people from Sennacherib's siege. Taharqa built the largest pyramid in the Nubian region at Nuri (near El-Kurru). Starting from the reign of Taharqa onward, the kings of this dynasty were driven back into Nubia, at first by the Assyrians under King Esarhaddon , then by the kings of the Twenty-Sixth Dynasty. Their successors came to settle in Nubia, where they established a kingdom at Napata (656 - 590 BC) then later, at Meroë (590 BC - 4th century AD). Taharqa remains an important historical figure in Sudan and elsewhere, as is evidenced by Will Smith's current project to depict Taharqa in a major motion picture.

Once the Assyrians had appointed Necho I as king and left Egypt, Tantamani marched down the Nile from Nubia and reoccupied all of Egypt including Memphis. Necho I, the Assyrians' representative, was killed in Tantamani's campaign. In reaction, the Assyrians returned to Egypt in force, defeated Tantamani's army in the Delta and advanced as far as south as Thebes, which they sacked. The Assyrian reconquest effectively ended Nubian control over Egypt although Tantamani's authority was still recognised in Upper Egypt until his 8th year. In 656 BC, Psamtik I's navy peacefully took control of Thebes and effectively unified all of Egypt. Tantamani died later and was buried with full honors in the royal cemetery of el-kurru upstream from the Kushite capital Napata.

Although the Twenty-Fifth Dynasty did not control Egypt for very long, it holds an important place in Egyptian history due to the restoration of traditional Egyptian values, culture, art, and architecture. The 25th dynasty likely influenced Greek visitors. Herodotus wrote that the Aethiopians (Greek name for Kush) may have been the most ancient people on Earth and that Egypt was founded from Ethiopia[16]. Herodotus also posited that the Greek gods originated in Ethiopia (e.g. Homer's references to the gods going to Ethiopia to convene). It's likely that Herodotus' claims were inspired by 25th dynasty inscriptions. It's known that the 25th Dynasty rulers restored many ancient texts. For example, Shabaka caused the "Shabako Stone", or "Memphite Cosmology", to be carved in stone from a more ancient text.